Will UK’s ‘Tempest’ Fighter End In A Teapot?

FARNBOROUGH AIR SHOW: The British government unveiled its £2 billion project to build an advanced fighter to succeed the Typhoon around 2030. 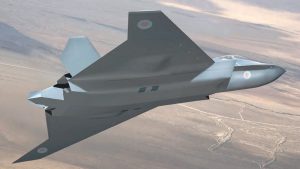 With few military aircraft flying and not a lot of big news coming out of the show, you’d think this would have been a subject of much discussion. Nope. Given the history of dropped and failed programs across Europe, of programs that morphed from a single-country effort to ones built by two or three or four other countries, there’s been a great deal of dismissive skepticism among the cognoscenti gathered here.

As for real fighters, an American F-16 from Germany flew here today, the first fighter to fly in three days of Farnborough. (OK, an F-35B flew during the opening, for a few seconds). Everyone bundled out to film and gape — and this is one of the most common fighters in the world, an aircraft that first flew in 1976. Think how people would have reacted to something genuinely new.

It’s a lesson the various air forces and the show’s organizers should keep in mind. Big, fast, loud and thrilling planes are why people come to airshows. Watching another 787 or A350 lumber through the air is not.