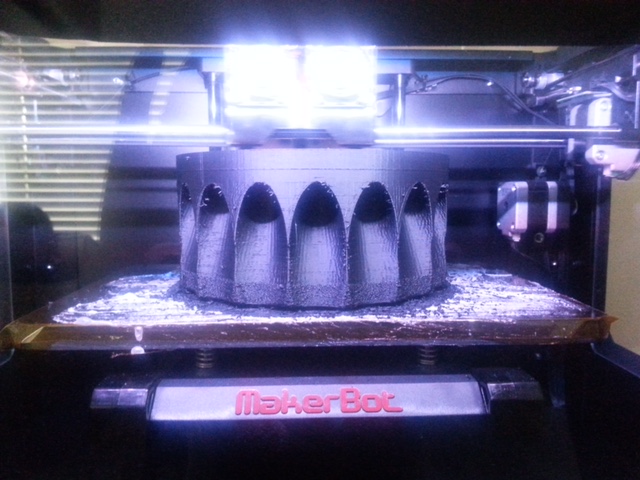 UPDATED with independent analysis from ICFI ARLINGTON: The race is on to build hypersonic weapons, missiles that blow through a target’s defenses at more than five times the speed of sound. Or should that be “the race to grow hypersonic weapons”? It turns out an unrelated cutting-edge technology, 3D printing, may be the key to making hypersonics work.

The whole aerospace world is intrigued by so-called additive manufacturing — especially for government and/or unmanned applications not subject to laborious FAA safety testing on new technology. NASA has a 3D printer on the International Space Station; the Navy has tested one on a ship. Several rocket engine companies have built key components for these exemplars of high tech using 3D printing; at Elon Musk’s radical venture SpaceX, for example, “they have a big 3D printer [and] they are making parts that are in production rocket engines right now,” said aerospace consultant Kevin Michaels, a vice-president at ICF International.

The ability to build up components dot by dot, layer by layer, can be helpful in making conventional aircraft, spacecraft, and missiles. But when it comes to making hypersonic systems, which require exotic materials and strangely shaped components that conventional methods can’t handle, 3D printing may be essential.

“There have been some fundamental gamechangers in that world (of hypersonics), so, not only can you build them, but you can build them affordably,” said Raytheon’s head of advanced missile systems, Tom Bussing, in a briefing for reporters yesterday afternoon. “You can build things you couldn’t otherwise build.”

“In the high-speed weapon area, (3D printing) becomes a fundamental enabler because that’s the only way you can make large structures out of exotic materials,” Bussing went on. “You literally grow those parts.”

“Growing” parts in a 3D printer allows you to make much more complex shapes than the traditional process — used since before the Bronze Age — of casting the basic shape in a mold and then cutting it to the final desired form.

For example, cooling is crucial in engines of all kinds. Even an ordinary jet airliner’s turbofans operate routinely at 400 degrees above the melting point of their component materials, kept intact only by an elaborate network of cooling channels, said Kevin Michaels. Now think about a hypersonic jet moving through the air more than ten times as fast, at Mach 5-plus, how much friction is heating up that hypersonic air vehicle, and how much more cooling it needs.

But if you want cooling vents in a traditionally manufactured component, you have to drill a bunch of holes in it (and hope you didn’t weaken it too much). If you want cooling vents in a 3D-printed component, you just program the printer to make a shape that has openings in it from the start. What’s more, if you drill out your cooling channels, they’re going to be pretty much straight; but if you grow the channels in a 3D printer, they can be helixes or other elaborate shapes that vent heat much more efficiently.

“If it’s more efficient, it means you can make it smaller, [with] less cooling,” said Bussing. “[It] lasts longer, flies farther.”

Raytheon already uses 3D printing for components of some weapons already in production, such as the Excalibur precision-guided artillery shell used in Afghanistan by the Army. For the future, “we’re actually looking at using additive manufacturing to grow entire weapons,” said Bussing. “We just made a big investment on a unique machine to do some very, very big structures.”

At least some of those big structures will probably be for hypersonic vehicles. Raytheon is currently competing with Lockheed Martin on two DARPA projects, with proposals on both just coming due: Tactical Boost-Glide (TBG) and the Hypersonic Air-Breathing Weapon Concept (HAWC).

Tactical Boost-Glide is the approach already tested by both Russia and China: a rocket motor boosts the missile up to hypersonic speed, after which it glides to the target. The goal is to “skip” off the atmosphere like a skipping stone over water, allowing it to go vast distances at extreme speeds. Getting this to work requires progress in aerodynamics, stability, and controls, as well as materials, Bussing said. 3D printing can help in all these areas.

An “air-breathing” hypersonic vehicle, by contrast, flies under its own jet power the whole way. This approach allows less range than boost-glide but greater maneuverability. Air-breathers can also be significantly smaller. A rocket has to carry large amounts of oxidizer to burn its fuel. A jet just sucks in oxygen from the atmosphere. But normal jets don’t have to suck in air moving at Mach 5-plus. A jet that works at hypersonic speeds will require some breakthroughs — and, again, 3D printing can help grow the exotic components.

Ultimately, the goal of both approaches is to hit enemies before they can react. Imagine a satellite spotting a North Korean nuclear missile rolling out of its cave and a hypersonic warhead destroying it before it can fire. Imagine a hypersonic weapon tearing through the complex layered defenses known as “anti-access/area denial” systems (A2/AD) before Russian or Chinese missile defense batteries can get a good enough radar lock to shoot it down.

But all those intriguing operational possibilities remain just that, possibilities, until someone can actually build the thing. 3D printing might just be America’s decisive edge to make hypersonics work.