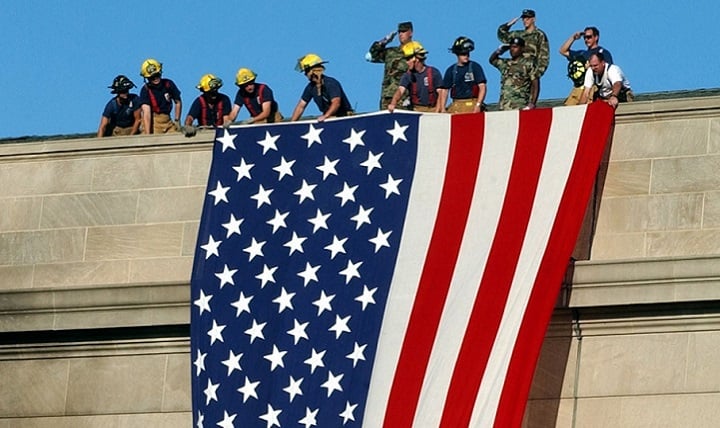 The war in Afghanistan grinds on, 18 years after Al Qaeda terrorists struck America. We’ve learned many lessons about the application of force, the crucial role of intelligence and special operators in combatting terrorists and seen the hydra-headed monster of terrorism spread among the disaffected, the misguided and the evil across Europe, America and the Mid East.

But this day remains a special marker for all Americans, our friends, allies and our adversaries. It stands on its own, emblazoned in our minds. Here’s the piece I wrote for the 10th anniversary of the 9/11 attacks. We must learn from our mistakes and those of our enemies, and honor the innocents who died, and all those who’ve given their lives since in trying to slice off the hydra’s heads, and, some day, kill the monster. The Editor.

I was editor of Defense News on Sept. 11, 2001. My son had been born just a few months earlier, that February.

The first hint I had of anything untoward was a bizarre story I heard on National Public Radio as I parked my VW Passat at the office just before 9 a.m. A small plane, they said, had reportedly struck one of the Twin Towers. I called my wife to tell her “some idiot” in a small plane had hit the World Trade Center and I mentioned that a bomber had once struck the Empire State Building at the end of World War II.

Blissfully unaware, I got out of the car on that most beautiful day — the temperature was perfect and a few fluffy white clouds marked the blue sky — and headed up to my office. My colleagues at Army, Navy, Marine Corps and Air Force Times all stood around the TV, mesmerized as our colleagues nailed down the fact that a large jetliner had struck the tower. We didn’t know it was a terrorist strike yet. That became clear when the second plane slammed into the other tower — something we watched happen. And happen. And happen. And happen. The networks scrambled to show incredulous viewers what had transpired, showing the footage several times.

When the plane struck, we all groaned. A few minutes later, I walked away from the TV to my office to begin figuring out how we were going to cover this. About 20 minutes later, a dull explosion boomed. A few minutes passed and we figured out that the Pentagon had been hit. We could see smoke rising from the building just a 10-minute drive from us.

One of my reporters was supposed to be on the way to the Pentagon for an interview. Another reporter was in Washington at a big conference on the military. Frank Tiboni, the second reporter, called me, saying every military officer’s pager had gone off within seconds of each other. They were evacuating the conference at the Ronald Reagan Building in central Washington, just a few blocks from the White House. “What should I do,” he asked. I sent him to Capitol Hill and told him to grab any defense lawmaker and try and find out as much as he could.

Frank ran up to Capitol Hill, literally chasing after lawmakers who had been told to evacuate the Capitol. That was how he broke the first story that Osama bin Laden was suspected of being behind the attacks. A lawmaker, literally being shoved by police to leave the area, jogged alongside Frank and gave him the interview.

The day flew by as buildings fell, people jumped to their deaths, heroes ran up stairs into the fires and fought back against their attackers. During the day the mother of one of my reporters called to check on her daughter. I did not know where she was or if she was alive, hurt or trying to chase the story at the burning Pentagon. That was the difficult moment of the day for me: telling a mother you don’t know if her child is alive.

Our boss ordered an evacuation of our building twice. We ignored her twice. The story was too big and we all knew far too many people who worked in the Pentagon and the intelligence community to value our own safety more highly than theirs.

Now, 10 years later, Osama is dead, as are many of the dogs who conspired with him. Our president, after one stirring moment holding that bullhorn at Ground Zero, lost sight of the strategic goals that mattered and wasted enormous treasure going into Iraq and taking his eyes off of Afghanistan.

So many Americans, Europeans, Iraqis, Afghans and Pakistanis are dead, maimed and mentally shattered. And Osama’s evil and our own blunders still ripple throughout the world. We are slowly wresting back our heritage of decency and of the intelligent and measured use of power. But my country remains exceptional, its people fundamentally decent and right-thinking, our conduct driven and harnessed by our Constitution and the great words of men like Abraham Lincoln. With our friends around the world, we will ensure that the mad 11 hijackers and their friends will not triumph.