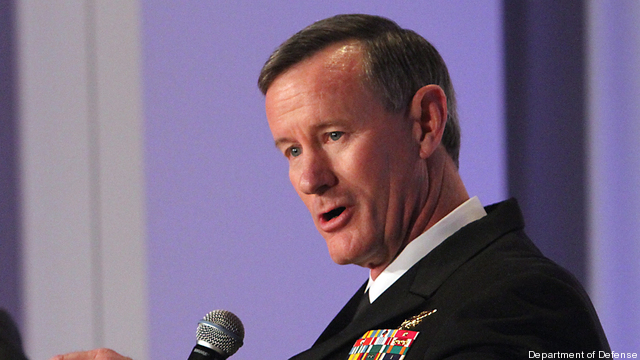 “I haven’t gone through the list yet,” McRaven told reporters accosting him after a speech, but SOCOM will make cuts “just like the services” (the Air Force, Army, and Navy and Marines have all outlined painful impacts) to accommodate both the continuing resolution, which sets spending at 2012 levels in the absence of a proper appropriations bill, and sequestration, the automatic across-the-board cuts set to take effect in March.

“The continuing resolution… in all honesty puts a greater constraint on us than sequester,” McRaven told the audience at the National Defense Industrial Association’s annual “special operations/low intensity conflict” (SOLIC) conference here in DC. “With the CR in place, now it leaves us at FY ’12 spending levels, which means we’ve lost about a billion dollars of spending capacity.”

“We don’t know what sequestration’s going to look like,” he went on. “It’s going to be an additional bill on top of that.” As the Pentagon scrambles to plan for the sequester, Congress is negotiating feverishly to prevent it, but any alternative plan is likely to include some defense cuts.

Neither piece of legislative leaves federal agencies much leeway to prioritize, McRaven acknowledged, but to the extent he could choose, he will protect current warfighting while cutting modernization. “You’ve got to be able to cut back on your investments, if you will, in the future,” he told reporters. “That’s about all you can do to make sure you can stay in the fight, to make sure your current force forward is taken care of.”

The axe will fall especially hard on commands outside conflict regions in Afghanistan and Africa. “We went through a budget drill with the sequestration,” said Maj. Gen. Michael Repass, commander of US special operations forces in Europe (SOCEUR). Between a 15 percent funding cut from the continuing resolution and another 8.5 percent from sequestration (assuming Congress doesn’t change the current law), Repass’s outfit faces “a 23.5 percent funding decrement” in the funding provided directly for Special Operations; comparable cuts are coming in funds provided via European Command.

Under economy measures instituted already, “I’ve given up over ten percent now,” Repass said at the conference, “and there’s more coming.”

McRaven spent most of his time praising that current forces’ accomplishments from Afghanistan to Colombia to the Philippines, emphasizing its post-9/11 closeness with the conventional military, civilian agencies like the CIA, and foreign partners. (I’ve counted officers from two dozen countries so far, from Afghanistan to Yemen, notably including both Niger and Nigeria — US partners in pacifying troubled Mali — and both Pakistan and India — two crucial but complicated relationships for the US).

McRaven declined to comment on current operations in Mali, deferring all questions to Africa Command chief Gen. Carter Ham. “My job is to provide forces to AFRICOM,” he emphasized, in one of a half-dozen expressions of deference to the theater combatant commanders. (By contrast, McRaven didn’t once mention SOCOM’s direct-action arm, the Joint Special Operations Command, which former Defense Secretary Donald Rumsfeld at times used to bypass the geographic commands, a major source of friction).

“I will tell you,” McRaven said, “that what we have learned in working around the world [is] you have to have that persistent presence. It has always been difficult for us in some countries to have a persistent presence, and Mali’s a case in point; we had an episodic presence.” Would having Special Operations advisors continuously training Mali’s army have prevented last year’s military coup and this year’s collapse? That, McRaven said, is impossible to say.