Adms. Davidson In, Harris Out At Indo-Pacific Command 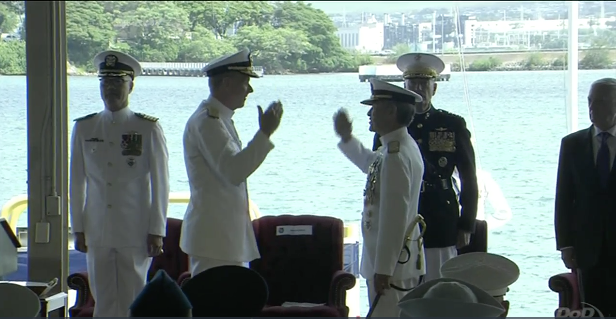 Davidson, as we’ve noted, has relatively little firsthand experience with the peoples and region over which he will now command 60 percent of the US Navy fleet, along with substantial Marine, Army and Air Force assets throughout the region. Davidson, as head of Fleet Command, recently led the investigation into what went wrong during Pacific Command’s three naval collisions last year, so he is familiar with what needs fixing and has now been put in the right place to do it.

Davidson noted in his speech that he’s been speaking with previous PACOMs and would be calling on them again now that he’s assumed the mantle of command. Among those he said he’s contacted are Thomas Fargo, Richard Macke, Joseph Prueher and Robert “Mac” Willard.

Davidson’s speech today lacked some of the punch of his predecessor’s, Adm Harry Harris, who may become our next ambassador to South Korea. Of course, senior leaders may have decided to let Harris, well known for his firm ideas on how we should treat with China, carry the water since he was retiring. “China remains our biggest long-term challenge,” Harris said in his usual unvarnished fashion. “We should cooperate with Beijing where we can, but stand ready to confront them where we must.”

Since he is in line to become our South Korean ambassador and talks are underway to revive the summit with North Korea, it was interesting to hear Harris lay down his views on the Hermit Kingdom: “North Korea remains our most imminent threat. A nuclear capable North Korea with ballistic missiles that can reach the United States is unacceptable.”

If you were a Chinese analyst watching the event, several things would have been crystal clear. You would have noted the Defense Secretary’s presence, as well as that of the president’s top military advisor, Chairman of the Joint Chiefs Gen. Joe Dunford. The Chief of Naval Operations, Adm. John Richardson, was also there.

You would have been reminded that America has many allies since many of them were there lending their public support to the new commander. I spotted Australian Army Maj. Gen. Roger Noble, deputy commander of US Army Pacific, as well as a number of allied military leaders. A few days ago two US ships passed within 12 miles of some of the Paracel Islands, which China claims as sovereign territory. China protested, and its defense ministry said the action “undermined the strategic trust between the two countries’ military forces.” After all, chief spokesman Senior Col. Wu Qian said, the U. S. ships had “gravely violated Chinese sovereignty.” China’s territorial claims in the South China Sea were rejected by an international tribunal last year. Wait — are those Adm. Harris’ words ringing in my ear?