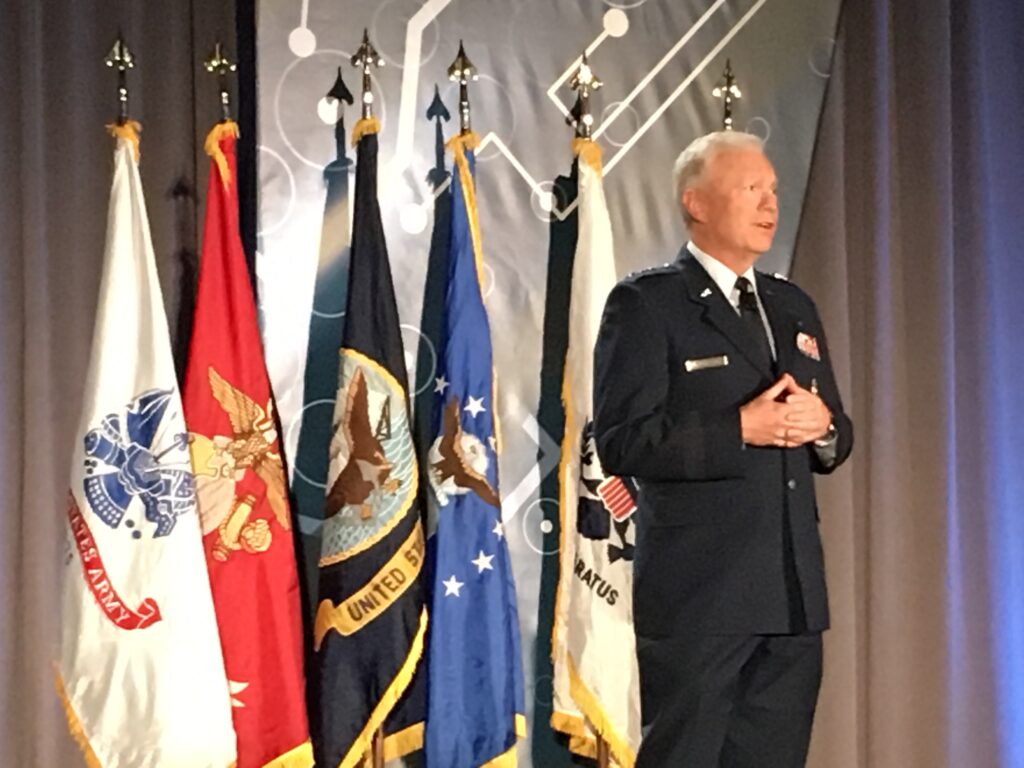 COLORADO SPRINGS: The head of Space and Missile Systems Center hinted at what he calls a re-architecting of what many believe to be one of the military’s most stovepiped organizations, calling for faster acquisition and major changes to how the Pentagon decides what weapons it’s going to buy.

“Some of you may have heard the US has lost its edge in space,” Air Force Lt. Gen. John Thompson, head of SMC, said at the AFCEA Rocky Mountain Cyberspace Symposium here. He didn’t think that’s the case –yet — but he told the audience that “we’ve got to make sure the adversary becomes the pursued.” He illustrated his point with a short clip of actor Jeff Goldblum being chased by a T-Rex in one of the Jurassic Park movies. Goldblum turns the tables by slamming on his brakes and coming up behind the somewhat dim-witted dinosaur and chases him.

“Our adversaries are much closer than we would like them to be,” Thompson conceded.

To help keep Russia and China — whom he did not mention by name — at a safe distance, the SMC leader called for changes to his organization. Instead of every program at SMC “having its own standards,” the builder of America’s military satellites and overseer of launch capabilities should “have a more cross-cutting environment.”

Famously, SMC is ruled by colonels who head System Program Offices that oversee GPS, communications, missile warning and other capabilities. For those who have tried to get comments from SMC over the last decade, the tight grip of the SPOs is often cited as a major factor in the command’s inability to generate comments in a timely manner. To their credit, the colonels are all highly skilled and possess knowledge the Russians and Chinese would love to get their hands on to improve their satellites, sensors and launch systems.

Air Force Secretary Heather Wilson said recently that SMC would be reorganized. In a conversation after his remarks, Thompson made clear he really doesn’t want to reorganize — which in a bureaucracy almost always creates enormous resistance — so much as change the way the existing organization works.

Thompson spent more time talking about changing how requirements are created and how that needs to change. Stressing that they were his personal opinions, he said much more emphasis needs to be placed on a capability-based system, not one based on threat. It’s intriguing he said this, as the Pentagon leadership for most of the last four years — regardless of president — has stressed that threats should drive requirements and show why the requirements process must be sped up.

“DoD has succumbed to building all our requirements solely on the basis of threat. It’s easy to build weapons systems based on exactly what you believe the threat is able to do. That doesn’t shoot high enough in my view,” Thompson said. “To me it is far more aggressive and generates far more payoff to do our requirements build based on what our capabilities are.”

Maj. Gen. Robert Skinner,  the deputy head of Air Force Space Command, told me that he agrees capabilities need to be an important part of the mix — after noting that Thompson was staring at him from the audience — but stressed that “we always have to keep the threat in mind.” Skinner placed more emphasis on simplifying requirements, pointing to the B-21 bomber. The Key Performance Parameters (known as, yes, KPPs) “are on one slide” and the entire set of requirements for the system occupies a tiny 10 to 13 pages.

Keeping those requirements and KPPs limited and focused gives industry much more flexibility to “let industry innovate” and provide the military with solutions that may cost less, provide capabilities the military might not know about yet and balance the costs and benefits of the solutions it offers.