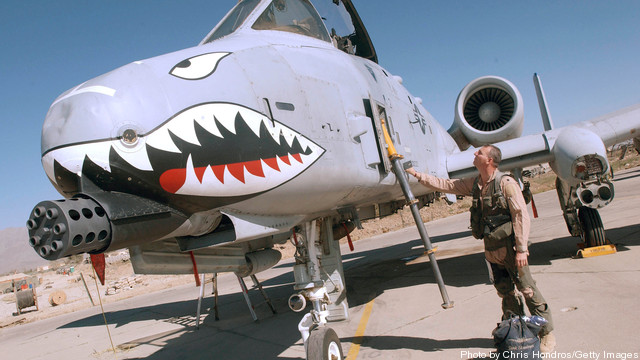 There hasn’t been much talk of the A-10 retirement by Congress early in the reaction to the budget, presumably because most senior members of the armed services committees believe they can keep the retirement at bay should they wish to.

But the pressure will increase on members to retire the close air support aircraft as the battle over the budget heightens. The A-10 isn’t being risked inside Syrian airspace because it isn’t as survivable as more advanced aircraft and doesn’t have the same advanced sensors as other more modern attack aircraft.

Here’s how the Air Force describes how the planes are being used against ISIL in Irag: “They’re conducting strikes on dynamic targets in Iraq in coordination with ground commanders through established coalition operation centers. They are not conducting close air support in the way that they did in Afghanistan. Dynamic targets are where we patrol an area where we expect the enemy to be and look for a chance to strike–As opposed to pre-planned, fixed deliberate targets.”

Also, as the F-35’s numbers rise over the next few years, reliance on A-10s is likely to wane further since the great majority of CAS missions are already accomplished using precision weapons. The issue of competition between the A-10 fleet and the F-35 fleet for mechanics, which the Air Force has said may imperil the F-35s Initial Operational Capability

The Air Force explains the new estimate thusly: “The FY16 PB accelerates the savings by divesting the fleet across only four years, instead of the five year divestment plan proposed in the FY15 PB. Because the plan still divests the entire A-10 fleet by FY19, the Air Force will yield an additional year of savings from not owning or operating A-10s in FY20. Air Force planning and budget practices continue to count savings from divesting a program until the program of record is removed.”