Posted by Theresa Hitchens on October 7, 2019 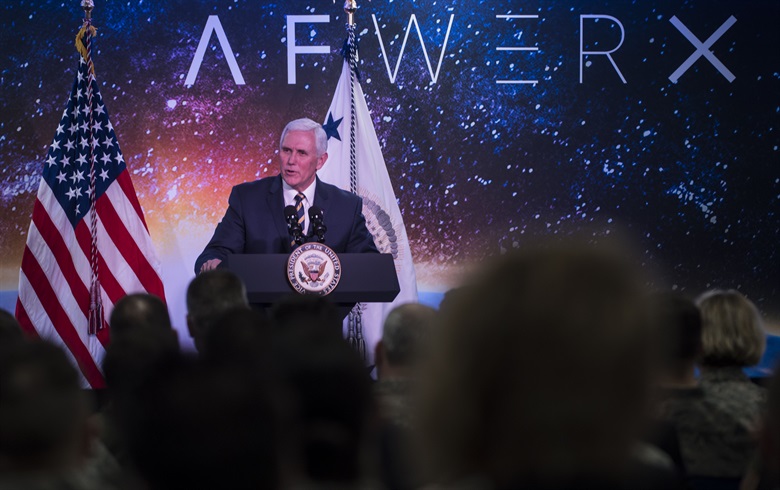 WASHINGTON: The Air Force tech accelerator AFWERX is dangling the prospect of an extra injection of capital for commercial startup firms that show promise in developing weapons for the service, via matching funds that start at $3 million — but the sky is the notional limit.

According to the “first of its kind” solicitation, obtained by Breaking D, the objective of the so-called commercial solutions opening (CSO) “is aimed at “solutions with significant dual-use potential; ability to scale rapidly; and of strategic interest to the US Air Force.”

The idea is to help startups bridge the dreaded ‘valley of death’ between a demonstrated capability and turn it into a DoD program of record that can in turn field new capabilities in quantities that are useful.

The CSO is open only to those companies already holding Phase II Small Business Innovation Research (SBIR) awards that are “showing success in their Phase II trial, and are capable of scaling that success rapidly into both USAF operations and commercial markets.” Firms have until Oct. 16 to submit a “pitch” document; awards are expected no later than March 21, 2020.

In particular, the CSO is aimed at “companies receiving previous specific awards under Air Force Special Topics, where significant additional capital is needed to transition their product or service into USAF operations.” An Air Force official said there were “hundreds” of companies eligible, but it remains unclear how many might qualify. “We’ll know better after Oct. 16,” the official said.

The topics of interest are related to the five strategic capabilities identified as priorities in the Air Force Research Laboratory Lab’s “Science and Technology Strategy;” Global Persistent Awareness; Resilient Information Sharing; Rapid, Effective Decision-Making; Complexity, Unpredictability, and Mass Speed and Reach of Disruption; and Lethality. There also is a “BLUE SKY” category of other technology that falls outside of current R&D interests, but might be of future use. Some of the specific areas of interest include materials, robotics, 3D printing, machine learning, drones, and technology related to C4I and networks.

Under the scheme, “companies can apply to increase the Phase II funding for a maximum period of 48 months, with a minimum funding increase amount of $3 million. There is no stated maximum.” However, any awards above $3 million will require a case-by-case agreement between the Small Business Administration (SBA) and the Air Force. (The Air Force has the authority to grant small business funds up to $3 million on its own.) The collaborative process to develop a “bespoke” contract vehicle for chosen startups is key to making the new approach possible, an Air Force official explained.

In the past, SBIR funds could provide only up to $1.5 million to match an equal amount of venture capital funding.

With this new CSO, the requirement for finding matching funds from both a potential Air Force customer, such as Space and Missile Systems Center, and private venture capital or other investors is now 1-1-2, explained an Air Force official; that is 1 part SBIR or a mix of “innovation funds” provided by interested Air Force users, plus 1 part non-SBIR government, and 2 parts private — with the SBIR/innovation match starting at $3 million.

The CSO provides the following example:

A company proposes to rapidly scale a Space Launch capability. During the initial Phase II, the company works with the relevant Air Force acquisition community, i.e., USAF Space and Missile Systems Center (SMC), to secure buy-in up to $15,000,000 to deliver the space launch capability. Additionally, the company seeks further private investment to continue developing the space launch technologies and the non-defense commercial market. This results in $30,000,000 from private investors. At the discretion of the SBA, the A SBIR Program Office will match the lower of A and B, where A = total Air Force acquisition commitment and B= 50% of total private investment. In this case, the company would receive $15,000,000, from SMC, $15,000,000 from SBA/USAF SBIR, and $30,000,000M from private investment, for a total of 60,000,000.

The CSO is being led by AFWERX, launched in 2017 to foster innovation within the Air Force, and to link with innovators in industry, academia and think tanks. AFWERX now has “innovation hubs” in DC, Austin and Las Vegas. It works closely with the AF SBIR office and the Air Force Acquisition office to figure out how to fund startups of interest.

One of AFWERX’s key tools are so-called Pitch Days, where startups are put together with providers of venture capital and potential Air Force customers to ‘pitch’ their products and services, the first of which was held in New York in March. Air Force acquisition czar Will Roper told Breaking D back in May that he hopes to ramp up “20 or 30 pitch events across the Air Force every year with dozens of accelerators.” The next Pitch Day, focused on space tech, will be held Nov. 5-6 in San Francisco.

Further, Roper told reporters at the 2019 Air Force Association (AFA) conference that he is considering giving AFWERX direct contracting authority, rather than it having to process awards through other contracting offices.