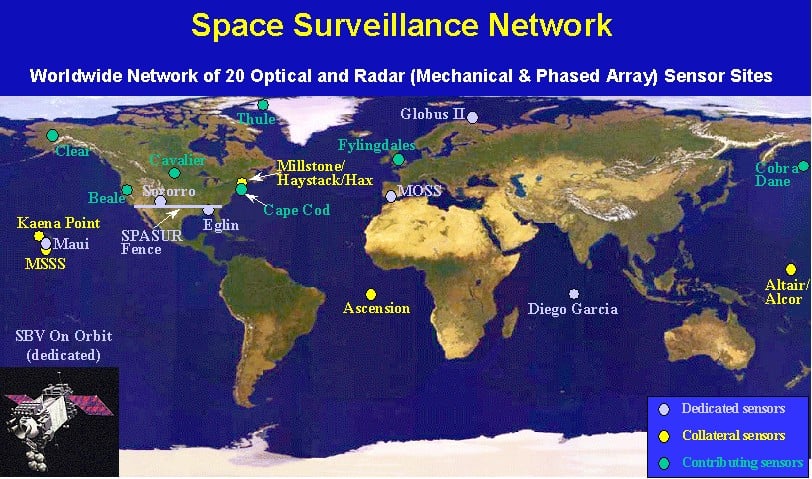 WASHINGTON: The little-known global Air Force network of telescopes for tracking satellites and spacecraft in deep space may add two new sites in Australia and Spain.

Industry proposals for helping the 20th Space Control Squadron at Peterson AFB maintain the Ground-based Electro-Optical Deep Space Surveillance (GEODSS) are due on July 29. The contract is for one year, with options for six additional years. The Air Force intends to chose a winner in April 2020.

The GEODSS network of telescopes can see objects the size of a basketball out to 40,000 kilometers. The one-meter telescopes are equipped with highly sensitive digital cameras known as the Deep STARE system. Each GEODSS site has three telescopes that are used in conjunction with each other or separately. The Deep STARE camera system can track multiple satellites at the same time. Data is processed and sent instantaneously to the 18 Space Control Squadron, which builds the Air Force’s catalog of space objects.

The three current GEODSS sites are: White Sands Missile Range, New Mexico; Diego Garcia, British Indian Ocean Territory; and Maui, Hawaii. According to the Air Force’s request for proposals (RFP), two new facilities “are being contemplated” at the Sierra Nevada Observatory in Granada, Spain and at the Siding Spring Observatory in Australia.

The Air Force already is planning to move the Space Surveillance Telescope, currently located at White Sands, to the Harold E. Holt Naval Communications Station in Western Australia under a 2013 bilateral agreement. The 3.5 meter telescope is set to be installed at Exmouth in 2021 (it was originally supposed to be operational in Australia in 2017.) A new building for the telescope, which will be operated by the Australian Royal Air Force, was completed in May, according to the Australian Ministry of Defense.

Australia is of particular interest to the Air Force for the Space Situational Awareness (SSA) mission because the Space Surveillance Network (SSN), which includes a number of radar facilities, lacks coverage of the Southern Hemisphere. The C-Band Space Surveillance Radar system was moved to Holt in 2017, becoming the first Low Earth Orbit (LEO) sensor for the SSN in the Southern Hemisphere.

In addition, the US has been working on how to be able to integrate SSA observation data from allies into the space object catalog to help improve both its ability to track satellites and help operators avoid on-orbit collisions. For example, Air Force Space Command is experimenting with a Unified Data Library (UDL) that allows integration of allied and commercial data with data from the SSN and classified sensors, as well as to share the integrated results with non-DoD operators.

There has been some concern that the US might lose access to the facility in Diego Garcia if and when Britain moves to return the Chagos Islands (of which Diego Garcia is the largest) to Mauritius, after the International Court of Justice ruled in February that the islands had been illegally appropriated by the United Kingdom during the decolonization of Mauritius in 1968.

According to the RFP, there also is a new requirement that the O&M contractor be able to support the facilities’ operations 24/7 rather than the previous 16 hours a day. Further, the contractor for the first time will be required to pass a number of cyber security certifications as well as to develop, and operate, a top-secret SCIF (Sensitive Compartmented Information Facility) at White Sands and Maui.

The RFP does not explain the reason new observatory sites are being considered, nor why there are the new requirements. Our request for comments led to what appears to be confusion about who actually is in charge of the GEODSS maintenance contract. My questions were first routed from Air Force Space Command to Air Force Space and Missile Center (SMC), then to the the 21st Space Wing — who then sent it back to Air Force Space Command. The RFP itself lists personnel at the 21st Contracting Squadron at Peterson AF as vendor contacts. They also did not respond to a request for clarification.

Harris Corporation — now L3 Harris after the merger between Harris and L3 Technologies approved in June by the Justice Department — is the incumbent, however a company source says it is not planning to bid for the new contract.