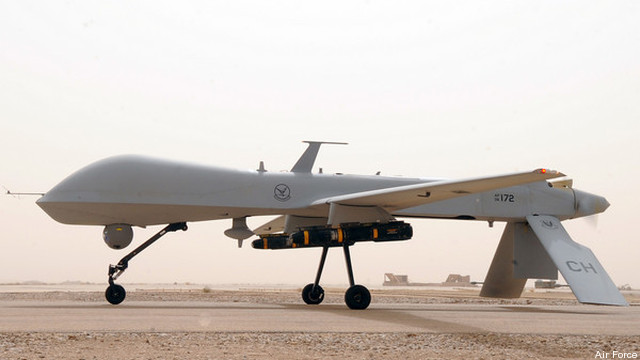 WASHINGTON: The Air Force is holding off on filling the skies the next generation of the Reaper UAV. Instead of putting more aircraft into the air that gather more data, the service plans to focus on how to better manage the flood of raw intelligence already streaming in, says one top service officer.

The Air Force recently included plans to buy 24 new Reapers as part of the service’s fiscal 2013 budget request sent to Congress on Monday. Initially, service leaders had planned to replace the the Reaper with the MQ-X, once the plane was fully developed. The new drone would have been able to operate in heavily defended airspace. The current Reaper and its predecessor the MQ-1B Predator, are not durable enough to operate in what are known as anti-access/active denial (A2D2) areas. However, James said the suspension of the MQ-X was a “near-term” decision, indicating service leaders could bring the program back at a later date. That additional time will allow Air Force leaders to incorporate lessons learned from the Navy’s new Unmanned Combat Air System Demonstrator into the MQ-X, according to James. “It’s [the] prudent way to move forward.”

Until then, the Air Force’s No. 1 priority for ISR ops will be how to get the raw intel gathered from its aerial drones into the hands of service analysts faster, James said. Lack of commonality between the aerial drones collecting information from the battlefield and the systems designed to process that info continues to hamstring combat commanders. It has become a monumental task to shift data between the various unmanned systems and move them into the processing, exploitation and dissemination (PED) cycle, Rear Adm. Bill Shannon, the Navy’s program executive officer for unmanned aviation and strike weapons, told Breaking Defense last week. Air Force Secretary Michael Donley has tasked Air Combat Command and the Air Force Science Board to find ways to improve the PED process. Gone are the days when intel analysts would pour over aerial photographs taken by U-2 spy planes looking for surface-to-air missile sites, as they did during the Cuban Missile Crisis, James said. “This is not your father’s imagery analysis anymore,” he said.


Moving away from buying more unmanned aircraft and focusing on the fleet it already possesses represents a strategic shift by the Air Force, defense aviation expert Phil Finnegan says. A clear example of this is how the service handled its Reaper and Predator purchases in the fiscal 2013 budget. “Reaper purchases were cut from 48 last year to 24 this year while Gray Eagle purchases were reduced from 43 to 19,” Finnegan tells Breaking Defense. “That is because there has been a shift of focus in favor of improving the capabilities of the overall system by adding money for training and ground stations.” One example is how the service is looking to change way its network of Distributed Common Ground Stations moves data to service analysts.

The DCGS are the service’s primary nodes for collecting and sharing intel gathered by unmanned aircraft stationed across the globe. This new road map will help streamline how that info is stored, categorized and moved to intelligence analysts. Air Force leaders are also exploring how to better integrate “non-traditional” ISR assets — aircraft not originally designed to collect intel — into the PED, he said. That work is ongoing and will likely inform the service’s budget proposal for fiscal ’14, which is already in the works, James said.