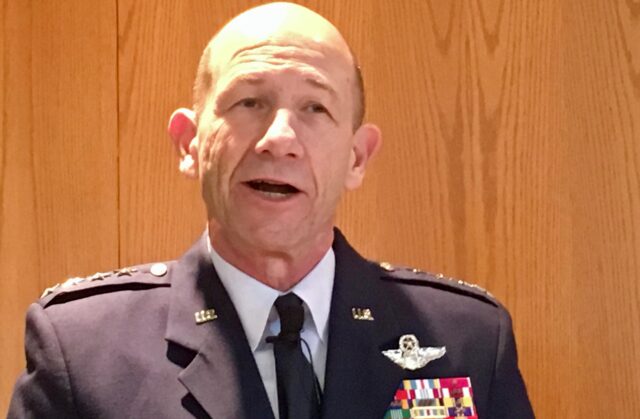 WASHINGTON: The Air Force will create a new organization under Air Combat Command (ACC) charged with information warfare operations, aimed at countering Russian (and to a lesser extent Chinese) hacking and disinformation activities that fall below the threshold of conflict. This marks the second military service to declare a major push on information warfare this week, with the Army stepping out two days ago.

“We are in competition with a peer adversary who has a military component that largely stays below the level of armed conflict,” ACC Commander Gen. Mike Holmes told an Air Force Association meeting this morning. “So we want to recast the competition on terms that are favorable for us.” Holmes said the new group should achieve Initial Operational Capability (IOC) in the fall.

The goal, he said, is to provide national decision-makers with “new options, and more coherent options” that are “not escalatory” but at the same time enable the US to deter “malign activities” by adversaries “from that information warfare level all the way up to conflict.” 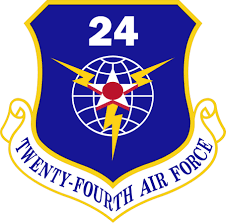 The reorganization will consolidate the 24th Air Force, which provides the Air Force’s contribution to Cyber Command (CYBERCOM) and the 25 Air Force, which provides mobile integrated intelligence, surveillance and reconnaissance to all of the component commands, under a single commander. Holmes said that a nomination package for that person is already in process. Last year, the 24th Air Force was moved from the purview of Air Force Space Command to Air Combat Command. Breaking D readers may recall that waaayyy back in 2017, we reported that the Air Force leadership was considering the merger to deal with the increasing overlap between electronic warfare and cyber attacks, as well as defensive operations. 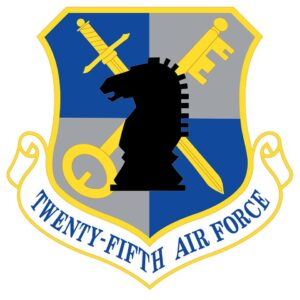 “This is a big job we’re going to ask a single Air Force commander to do,” Holmes said. It includes managing the service’s component to CYBERCOM; commanding the Joint Forces Headquarters for cyber at the Air Force level that is focused on European Command, Transportation Command and Strategic Command; serving as the Air Force’s network operations commander; and as the “cryptological component commander” providing crypto personnel and capabilities to the National Security Agency and the Intelligence Community.

Holmes admitted that the Air Force is still in the throes of defining its precise role in information warfare operations, and trying to “work definitions across the joint world.”

Indeed, hashing out service roles with respect to fighting fire with fire in the murky information warfare arena is going to be a critical issue for the Pentagon. While it has been less public about its efforts than the Air Force and Army, the Navy also is wrestling with its cyber policy in the face of persistent Chinese and Iranian hacking.

Holmes conceded that there are serious legal issues to be sorted out, as well as sticky policy issues. There is a long-running debate in the United States about the blurry line between Title 10 authority that governs military operations and Title 50 that governs intelligence operations. That line becomes even more blurred when it comes to offensive cyber operations. President Donald Trump last year delegated authority to the Secretary of Defense to use offensive cyber tools to disrupt or degrade an adversary’s network or cunter ongoing attacks on US information networks — loosening what had been strict presidential control imposed in 2012 on offensive cyber operations by the Obama Administration. However, exactly what those authorities are — and how they co-exist with those governing the activities of the NSA, the CIA and other IC organizations — remain classified.

He stressed, however, that ACC will not “run an Air Force independent information warfare campaign.” Instead, Holmes explained, the new organization will “provide capabilities that will be operated either by the Intelligence Community or by the COCOMs at the direction of the President or the Secretary of Defense. Our job is to build capabilities that they can choose from.”