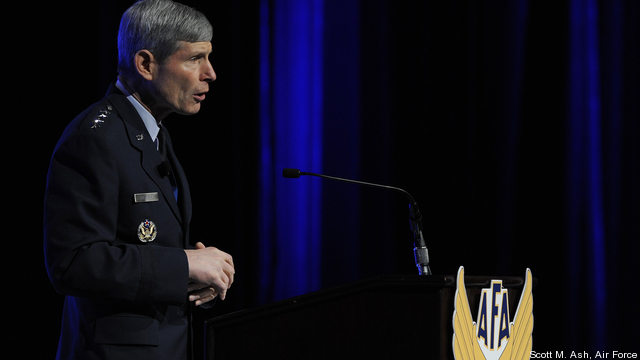 ORLANDO: He didn’t use the word sequestration — perhaps because the Air Force is still trying to explain the C-27’s “divestiture” — but Gen. Norton Schwartz told the Air Force Association’s winter conference today that “we fully expect we will be making further tough [budget] calls.”

It wasn’t completely clear whether Schwartz was referring to sequestration — it didn’t sound like it — but it was clear he was signaling to his mixed audience of airmen, industry types and Air Force supporters that while the service is well served by the administration’s new strategy and the tilt to the Pacific and Middle East that doesn’t mean the fiscal pain is over.

Part of the problem will be that the Air Force must migrate “billions” from the operational budget, (known to Pentagon budget weenies as OCO), Schwartz told several hundred attendees.

But he also took up the warnings that we’ve heard from other members of the Joint Chiefs of Staff, that sequestration could be deeply harmful to the U.S. military, in part because the law mandates that the cuts be made equally throughout the budget, without regard to strategic need or program status. He referred to it as “indiscriminate salami slicing” of the budget.

The Air Force chief of staff also offered the audience a glimpse of just how difficult the 2013 budget decisions had been. He and his budget team had hoped to identify whole aircraft fleets that they could cut, since that would be the most efficient and strategic approach to saving large quantities of cash. “But,” he said, “retirement of fleets were not possible.” He didn’t say this, but that would appear to be why the service decided to retire five A-10 Warthog squadrons — not the entire fleet.

Another example of the difficult decisions: “divestiture” of the C-27 cargo plane. Schwartz had pledged his Army colleague that he would not abandon the plane, which the ground huggers argued provided important tactical airlift.

But, as Schwartz put it: “That was 487 billion dollars ago.” The Air Force has concluded that the
larger C-130 “can do virtually all the time-sensitive support that the Army needs. We will do that,” Schwartz said, “or we will die trying.” That’s probably a good idea, given that the director of Air Force operations, Maj. Gen. Brett Williams, told the AFA audience after Schwartz spoke that he had been up to Capitol Hill three times in the last week explaining just what “divestiture” of the C-27 meant and why the Air Force had done it.