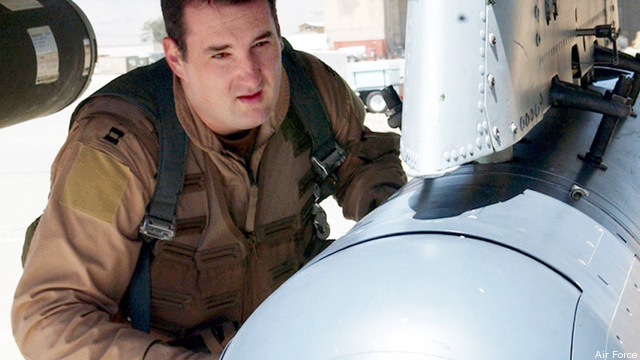 NATIONAL HARBOR: As the US shifts its focus from low-tech Taliban “cavemen” to an aggressively modernizing China, the Air Force has launched an urgent effort to find near-term countermeasures against a foe that can jam sensors, hack networks, disrupt communications, and shut down GPS.

“Mostly we’re looking at the next three to five years,” said Randall Walden, the director of information dominance programs under the service’s assistant secretary for acquisition. On that schedule, he said, “you’re not talking about a brand new system. You’re not even talking about cutting a hole in a current plane [to modify it]. You’re talking about pods and concepts.”

Whatever industry offers, “we need to be able to integrate that into a legacy fleet,” Walden said, “[and] if it breaks the bank, it’s not going to help us very much.”

The Air Force wants industry to offer affordable “adjuncts” to existing systems, not to spend a decade developing replacements, Walden emphasized repeatedly to a contractor-heavy audience at the Air Force Association’s annual conference here. His topic: a new Air Force study of “Effective Warfighting In Contested Environments” — inevitably acronymized as EWICE — which kicked off in July and will issue its final (probably classified) report in February. New technology and gadgetry from industry are welcome, Walden said, but such “materiel solutions” will be secondary to changes in Air Force operations, tactics, and training.

For example, Elder said, “we’ve gotten used to the fact that we can fly remotely piloted vehicles over Afghanistan,” like the Predator, Reaper, and Global Hawk drones, but all those “unmanned” aircraft must stay in constant contact with human operators on the ground, both to control their flight and to download the masses of data they collect. Even manned planes — with the crew onboard instead of remotely piloting the aircraft from the ground — have come to rely on satellites for constant communications and for navigation data from Global Positioning System (GPS).

A sophisticated adversary could disrupt those crucial links — but right now the Air Force has trouble even training for such a possibility. “We don’t have really good ways to simulate these problems today,” Elder said. “This is actually one of the areas we need some help” from industry.

The Air Force does not jam military GPS and communications in exercises today, Elder explained, because the jammers would disrupt civilian systems as well. So trainers and wargame controllers just have to tell aircrews to stop using their radios or turn off GPS. But that kind of obvious on-or-off is poor preparation for an actual conflict with a sophisticated adversary, and the Air Force is interested in systems for more realistic training and simulation.

“In the real world,” Elder said, “you may not even realize your GPS is out [or that] something happened that’s pulling the signal off so they’re really not where they think they are…. If you deal with a peer adversary those things are going to happen.”

What peer adversary would that be? The participants in the project is an answer in itself. Besides representatives from every Air Force major command, the study group includes representatives from the Navy’s “information dominance” staff (sections N-2/N-6), the interservice AirSea Battle Office, and four key allies: the British, Canada, and Pacific stalwart Australia.

“The Pacific pivot [announced by the administration in January], this is part of the answer to that,” said Elder. Added Walden, the study’s focus on specific near-term solutions is “very complementary to AirSea Battle,” the overarching Air Force-Navy concept for long-range warfare against a high-tech adversary.

Both Elder and Walden studiously avoided the word “China,” and just yesterday no less a figure than Air Force Secretary Michael Donley reiterated to reporters at the conference that AirSea Battle is not aimed at any one country. But the repeated invocation of “the Pacific” and such codewords as “peer adversary” left little doubt what nation the Air Force is worried about: There is only one country that meets all three criteria of (1) a plausible potential adversary (2) located in the Pacific with (3) technology approaching America’s own.

Certainly the Chinese aren’t deceived. “AirSea battle definitely has their attention; they don’t know exactly what it is but they don’t like it very much,” said Phillip Saunders, director of the Center for the Study of Chinese Military Affairs at National Defense University, in a talk at AFA on Monday. That said, he added, “they see the ‘rebalancing’ in Asia as more a political challenge than a military one,” because China is well aware of US budget constraints: “It’s an open question to them as to how it will be resourced” so actual forces are involved, instead of words. That’s the question the Air Force’s “Effective Warfighting In Contested Environments” study had better help answer.