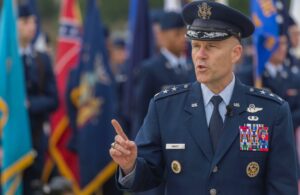 After the House of Representatives passed legislation calling for a Space Corps, the head of the Air Force, Secretary Heather Wilson, and the service’s Chief of Staff, Gen. David Goldfein, rejected the idea. Completely.

Then the Air Force placed a gag order — in government speak, Restrictive Public Affairs Guidance — which suppressed advocacy for a Space Force and stifled public debate. Only one Air Force officer,  Lt. Gen. Steve Kwast, spoke publicly in favor of it. Air Force officers who hope to maintain our proud tradition of conscience over career owe him a debt of gratitude.

The gag order worked – for more than a year, during the most important Air Force debate in a century — the majority of officers have held their tongue. While polls by Air Force Times suggest that a majority of Air Force officers favor a Space Corps, only one of them displayed the moral courage to speak truth to power. His courage opened the floodgates for others to follow, ultimately overturning the false impression of a monolithic Air Force intent on blocking Congress and blocking the Trump Administration. Kwast provides a powerful example of character and moral courage that all officers should emulate.

One does not need to agree with Kwast or the Trump Administration on the need for a Space Force.  His example is a model of principled behavior that military officers and enlisted should emulate.

When Congress asked for a Space Corps and the Trump Administration ordered a Space Force, did even one active-duty space professional senior leader speak out publicly in favor? No.

Could it be that not one senior space professional thought space was important enough to justify its own service? No. Why were Air Force space professionals absent from the debate?  Why didn’t they offer dissenting best-military advice to the American people? The most direct answer is simple — they were told not to. Perhaps they agreed with Defense Secretary Jim Mattis or Secretary Wilson’s position opposing a new service. But recent remarks of Acting Air Force Secretary Matt Donovan and Senate testimony by STRATCOM commander Gen. John Hyten suggest that dissenting views may have been widespread.

If the new Acting Secretary of the Air Force, Matt Donovan, is looking for someone who can “unleash the power of space” he should look to the bold leadership of Steve Kwast and recommend his nomination to be the first Space Force Commander.

While others fought to maintain the status quo, Kwast pushed the envelope. He built partnerships with NASA, the Federal Aviation Administration (FAA), the Defense Innovation Unit (DIU) and other agencies critical to advancing comprehensive U.S. space power.  As Air University president, Kwast commissioned efforts laying the groundwork for the most far-reaching thinking to advance U.S. space power. He commissioned the FAST SPACE study, which laid down the ground work for a partnership with the private sector to advance responsible and reusable launch, as well as so-called mega-constellations, which are now being advanced by DIU and the new Space Development Agency (SDA). Kwast sponsored the Space Horizons Task Force, the winning D3 team, Squadron Next, and ultimately the Schriever Scholars.  The breadth of space vision and leadership he offers the nation is apparent in his address to the inaugural class of Schriever Scholars.

Those citizens who share the vision of an independent Space Force to secure America’s spacefaring future must count Kwast as first among its founding fathers, and the only one who has appeared willing to sacrifice his career to see its birth.

Principled dissent is an important counter-weight to the “yes-man” culture that silences too many in the American military from speaking their minds. Those officers and enlisted personnel working to maintain the culture of honesty, openness, and debate in the Air Force should be aware of his example in the tradition of Billy Mitchell and John Boyd. Without maverick thinkers, the forces of careerism and groupthink place our nation in peril because we fail to confront uncomfortable truths and deny the knowledge we need to make informed choices.

Military officers know that their highest duty is to the Constitution and that acting on their conscience occasionally requires breaking rules or orders to obey the higher good. Kwast walked the talk. True to his belief that the United States faces an existential struggle over human values with authoritarian powers, he was tireless in his efforts to alert all of us to the true scale of the threat.

Did Kwast’s advocacy of a broader and more aggressive approach to space power hurt his career? Yes. Last month, a replacement was named to take over his command, and no future position was announced for him. This not only forces an innovative and courageous officer into retirement, it also effectively subverts the Trump Administration by denying them a powerful voice in uniform who possesses an expansive view of space power.

Over its 243 years of history, the Navy has found it possible to have vigorous military debate and still have a disciplined armed service. The question isn’t about Gen. Kwast, the individual; the question is larger. Can the Air Force maintain a culture where creative and maverick thinkers talents are harnessed and not sidelined?

Peter Garretson is an independent strategy consultant who focuses on space and defense. A retired Air Force officer, he was previously the director of Air University’s Space Horizons Task Force, America’s think tank for space, and was deputy director of America’s premier space strategy program, the Schriever Scholars.  All views are his own.