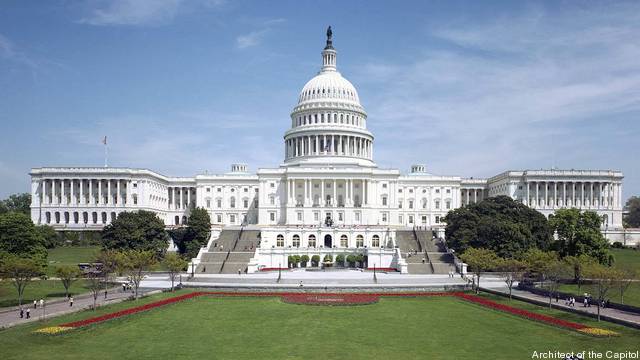 [Updated Friday 12/21] CAPITOL HILL: It looks like the country’s getting a defense bill for Christmas, with provisions on everything from boosting cybersecurity to sanctioning Iran to loosening export controls on satellites.

In what passes for high efficiency in Congress these days, the House and Senate Armed Services Committees completed their conference on the National Defense Authorization Act for Fiscal Year 2013 only two and a half months after the start of fiscal ’13 and just two weeks before sequestration may make many of their carefully wrought compromises moot.

The bill goes to the full House Thursday (constitutionally, all tax and spending bills must originate in the House of Representatives) and then to the Senate. If passed and signed by the President, as is almost certain, it will be the 51st year in a row the two armed services committees have passed their annual authorization bill — a consistent track record standing in stark contrast to the chronic gridlock on most other committees in Congress. [Update: As expected, the NDAA passed the House on Thursday and the Senate on Friday, 81-14, so it now heads to the President.].

The bill authorizes $552.2 billion for the base budget and $88.5 billion for “overseas contingency operations,” a relatively miniscule $1.7 billion — less than 0.04 percent — over the President’s original request in February. (That figure is for the entire NDAA, which funds both the Defense Department and parts of the Department of Energy; since the bill cuts energy, the DoD budget is actually $2.1 billion over the request — still less than 0.05 percent). But though the topline is almost exactly the same, plenty of items changed on the way through Congress.

This afternoon, at a crowded press conference outside the conference chambers, the top four legislators to the two panels — Senators Carl Levin and John McCain, Congressmen Buck McKeon and Adam Smith — hit what they considered the highlights, with a little prodding from the swarming press and a few judicious emendations from their hovering staff:

— In good news for the defense and aerospace industries, the conference approved multi-year procurement deals for V-22 tilt-rotors, Army CH-47 helicopters, and Navy submarines and destroyers, including a gimmick known as “incremental funding” to buy an additional submarine in 2014.
It also provided $338 million for continued production of Army heavy armored vehicles, including M1 Abrams tanks, M2 Bradley troop carriers, and M88 Hercules recovery vehicles, a kind of giant tow-truck for tanks.
The bill also includes long-awaited provisions to make it easier for US companies to export satellites and satellite technology, moving “certain [unspecified] classes of satellites from the Munitions List to the [much less strict] Commerce Control List.” That lifts at least some of the restrictions that have hamstrung the US space industries’ global competitiveness. “This is a national security argument,” said Rep. Smith, the top Democrat on the House Armed Services Committee. If the US doesn’t have a healthy space industry, “we are not safe,” he said. “To rely on foreign suppliers is always going to be more difficult.”
The conference even rejected a proposal to reduce the maximum contractor salary that DoD will reimburse.

— In less good news for the industry, defense contractors will be required to report any cybersecurity breaches of their systems, as soon as the Defense Department sets up a system for them to do so.

— In bad news for the People’s Liberation Army, the conference retained Sen. Jim Webb’s amendment pledging the US to stand by Japan if anyone attacks the disputed Senkaku Islands, which China calls the Diaoyus.
But the conferees did not lift restrictions on the Pentagon spending money to move Marines from Okinawa to Guam, a key part of the “Pacific Pivot,” saying the military’s cost estimates are still not ready for prime time: “They’re not quite ready yet,” said SASC chairman Levin. (Breaking Defense earlier published exclusive details from a leaked GAO study saying the Pentagon had undercounted the cost of the Okinawa move and the Pentagon’s rebuttal).

— In bad news for the Air National Guard, the conference accepted the administration’s November 2nd compromise offer on downsizing the Air Guard. That compromise cuts far fewer aircraft and personnel than the Air Force had proposed in its original February budget, but far more than the zero that Guard advocates would prefer. (National Guard Association of the US president Gus Hargett spoke to Breaking Defense Thursday about his fears that just this compromise would get through the conference).
The conference did require the Pentagon to keep 32 more tactical airlift planes than it had included in its November proposal. The planes are ostensibly to maintain support for the Army but also happen to the types most desired by state Governors for disaster response. At least the Air Force will get to choose whether the 32 are C-130Js, smaller C-27s, or some mix thereof.
All told, those provisions add up to a modest win for the active-duty Air Force. But the conferees were deeply skeptical of the service’s analysis justifying the cuts, and all future reductions will have go through a Congressionally chartered commission, an idea originally proposed in the Senate that the administration had hoped the conference would drop. Four of the commissioners will be appointed by the President, four by Congress (two each by HASC and by SASC).

— New sanctions on Iranian “energy, shipping, ship building, and financial services” entities will go ahead, despite the White House’s concerns. But the bill does “increase some of the time that is available to them to implement this legislation,” said Sen. Levin.
“We’ve met most of their objections,” added Sen. McCain, the SASC’s top Republican. With Iran progressing apparently undeterred on the path to nuclear weapons, the irascible Arizonan went on, “we had no choice” but to further tighten sanctions.

— Military personnel will get a 1.7 percent pay raise, but they’ll also have to pay slightly more for their Pentagon-provided healthcare. “We did not allow the increase in the copayment which was requested,” said Levin. “We have a more modest increase in the copayment,” he emphasized, “significantly more modest than what the administration requested.”
But any increase is a minor breakthrough: Rapidly growing expenses for personnel in general and healthcare in particular have been eating up every more defense dollars that might otherwise go to operations or new weapons, much to budgeteers’ alarm, but the politics of personnel benefits have made any reductions the military’s own equivalent of the infamous “third rail.”

— The conference rejected a House ban on the military buying biofuels, a practice which infuriated Republicans, who point out that gas is far cheaper by the gallon, but it did restrict Pentagon spending to build a new biofuel refinery until the Departments of Energy and Agriculture pay up with the equal shares that the Administration originally said they would provide.

— In light of the deadly terrorist attack on the US consulate in Benghazi, the bill authorizes an additional 1,000 Marine Corps guards at diplomatic facilities around the world. (The State Department’s own Diplomatic Security Service, however, which bears the brunt of defending diplomats, is outside the armed services committees’ jurisdiction).

— And in the most controversial issue beyond the insular world of Washington, the conference stripped Senate language banning indefinite detention of suspects in the “war on terror” and instead simply restated that Congress had never authorized any limits on habeas corpus or other rights either in last year’s defense bill or in the original 2001 authorization for the use of force against the perpetrators of the 9/11 attacks.
The bill also forbids the transfer of detainees from Guantamo Bay to prisons in the United States, but only for one year, instead of an indefinite ban to which the administration had objected.

The HASC Republicans’ official written summary of the NDAA is online here, and the HASC Democrats’ here, while SASC’s is circulating online, but all leave out some key details divulged during and after the press conference. We’ll keep on this story as we learn more.