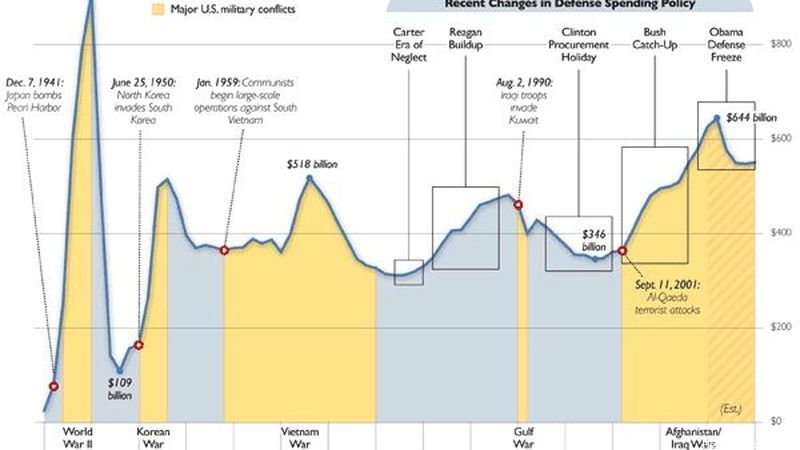 WASHINGTON: There are two anchors of conventional views on the U.S. DoD budget outlook. The first is that it is cyclical and headed down and will follow the same trajectory as defense budgets in the last four cycles since the late 1940s. The second anchor is that the U.S. can and should “pivot” its strategy towards Asia.

There are reasons to question both consensus views.

Most people who discuss U.S. defense budget trends tend to so from the very narrow perspective of U.S. defense spending (in constant dollars) from 1947 through 2010-2016. That framework allows some to believe that there are set parameters to spending over cycles and to even proclaim cycles follow uniform periods for up and down trends. Those four U.S. cycles, however, are a pretty narrow set of observations with which to fix a future course for U.S. spending. Three of the cycles were caused by direct and indirect conflict with the Soviet Union and that catalyst is gone. The latest cycle was spawned was a willingness by the U.S. to commit large numbers of ground forces to Iraq and Afghanistan.

U.S. defense spending will decline in 2012-14 but then there is the question of “what next.” High sovereign debt and sustained demand for non-defense discretionary spending and entitlement programs are factors that are unique, compared to the period from 1940 through the 1990s. On the other hand, the Middle East doesn’t appear to be more stable and there remains the risk that the Arab Spring may turns to Winter. China will protect its interests and recently created wealth and has the resources of a robust industrial base and an emerging technical base to do so. Nuclear weapons proliferation in the 1950s-70s was limited to two adversaries — China and the Soviet Union: that has changed. There are bound to be other security surprises beyond some of the obvious sources of potential instability recognized today.

Part of the “what next” could be illuminated by thinking beyond the narrow box of U.S. defense spending in constant dollars from 1947-2010. There is data on defense spending for the U.S. and for other countries (some of whom faced similar strategic issues) across different time periods. This data, and its interpretation, should become part of the dialog and analysis of future U.S. spending trends.

• U.S. spending in the 19th century was mainly defined by the Civil War and the war with Spain over Cuba and the Philippines. Other cycles are hard to discern over this time period. Spending as a percent of GDP was low, but then the U.S. was not a global power with global interests.

• Japanese defense spending 1920-1940 showed little change until 1935-36 when it became militarily engaged in China and launched a major naval expansion program. Expenditures prior to that ramp-up saw a dip in the post World War I period but were stable for 10 years.

U.S. plans to pivot our strategic focus to Asia and away from the Middle East, Europe and Southwest Asia might instead turn out to be a pirouette. The “pivot” has implications for defense spending as ground forces again become the bill payers for air, space and naval forces in the budget drawdown. However, it is entirely possible that events in the regions the U.S. is pivoting away from won’t at some point yank the U.S. back. Not that another 100,000-plus troop deployment in the region is likely, but there are enough pots on the stove that could boil over and entail some level of heightened U.S. engagement. Furthermore, when Iran states that it will attack Turkey if Israel attacks Iran, that seems to indicate this region shouldn’t be a bad environment for sustained weapons imports and defense spending.

Even as the U.S. draws down troops it is going to have a strategic interest in Pakistan. The December issue of The Atlantic has a cover story, “The Ally From Hell,” about Pakistan. It includes a lengthy discussion about Pakistani concerns over their nuclear arsenal and the U.S. focus and plans to neutralize that arsenal if a weapon(s) fell in terrorist hands or there was broader turmoil in Pakistan. It seems clear from the article that, in these scenarios, U.S. technical intelligence means and strike aircraft and missiles could not alone neutralize Pakistan’s nuclear weapons.

While the Libyan civil war was a non-event for U.S. defense spending, that conflict needs to be kept in context. Syria faces a civil war in that country which could be qualitatively different than the one that is winding down in Libya. There 22.5 million Syrians compared to are 6.5 million Libyans. Syria’s active and reserve forces are about five times larger than pre-war Libya’s and Syria has an extensive arsenal of aged Soviet equipment (which Libya did too). Syria borders a key NATO member, Turkey, as well as Israel, Jordan, Lebanon and Iraq, which are all important to U.S. interests in the Middle East. Turkey’s deputy prime minister stated last week that his country was opposed to foreign intervention in Syria but a civil war there has the potential to create large refugee movements and potentially involve Syria’s neighbors. Additionally, there have been reports that Libya may send weapons to Syrian rebel groups.

The recent Egyptian demonstrations are a reminder that conditions are not settled in that country by a long-shot. The Egyptian military appears to be firmly in control and elections have gone smoothly, but that could change, and there is the risk of weapons seeping into Egypt from Libya.
Iran is an issue that is not about to slink away quietly into the night. The mob that attacked the British Embassy is another bit of evidence that Iran is willing to respond to an escalation of pressure to curtail its nuclear program. At any point this escalatory behavior could create new immediate security challenges.

Byron Callan, one of the most experienced U.S. defense stock and company analysts, is a director at Capital Alpha Partners LLC.