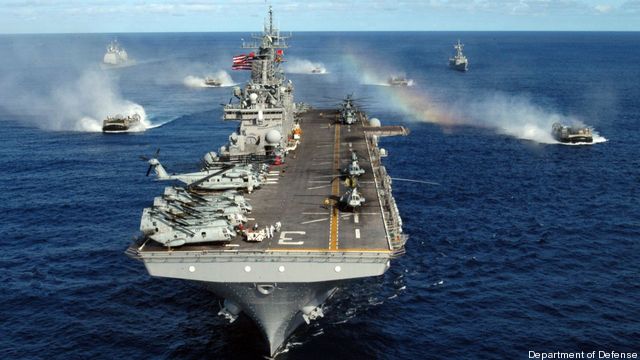 The future of the Marines, which has been hotly debated ever since Defense Secretary Robert Gates referred to it as our “second land army” days after he announced the closure of Joint Forces Command, may well lie more in the air than on the sea.

If you want to glimpse that future you could look at the fleet of around 20 warships from at least five nations that assembled off the Libyan coast in mid-March. It was notable for what it lacked: one of the U.S. Navy’s 100,000-ton displacement “supercarriers.”

The operation aimed at protecting civilians from Libyan dictator Muammar Gaddhafi’s forces was the first major conflict in decades that did not involve one of America’s 11 large carriers. Instead, the American contribution to Operation Odyssey Dawn was spearheaded by four vertical-landing AV-8B Harrier jump jets flying from the 800-foot-long deck of the Navy’s amphibious assault ship USS Kearsarge.

The 40,000-ton vessel was designed to carry Marines, their vehicles and their landing craft close to shore during beach-assault missions. Her straight flight deck is optimized for launching and recovering helicopters, not for high-performance jet aircraft. She was on a routine deployment to the Indian Ocean when orders came to sail for Libya.

When she arrived off the North African coast, Kearsarge functioned as an aircraft carrier, albeit a much smaller one than the Nimitz– and Enterprise-class supercarriers. Her four Harriers — carrying camera pods, precision-guided bombs and air-to-air missiles — flew some of the first aerial missions of the now two-month-old intervention. They comprised, in essence, a self-sufficient, miniature naval air force. Those capabilities might pale when compared to a super carrier’s 50 fixed-wing warplanes, but they were there when they needed to be and they worked.

Kearsargehad departed her homeport of Norfolk, Virginia, as an amphibious assault ship; she returned in May as a de facto light aircraft carrier — and a vision of the U.S. Marine Corps of the future.

With the U.S. military quickly drawing down in Iraq and eyeing a slow departure from Afghanistan starting this summer — and with trillion-dollar federal budget deficits weighing heavily on voters and politicians — Washington is conducting a bottom-up review of American military forces.

The Army, Navy and Air Force could surrender entire roles and missions in order to reduce overlap and specialize. Already, the Army has handed its new high-speed catamaran supply ships to the Navy and its fixed-wing C-27J cargo planes to the Air Force.

But the Marines will probably keep doing a little bit of everything, as they’re the only force that historically has done so cheaply, quickly and well. “Responsive and scalable, we operate independent of local infrastructure,” Gen. James Amos, the Marine Corps commandant, explained in January. “A middleweight force, we are light enough to get there quickly, but heavy enough to carry the day upon arrival. We operate throughout the spectrum of threats – irregular, hybrid, or conventional – or the shady areas where they overlap.”

That flexibility represents a kind of specialization in its own right. “You don’twant Marine forces doing just one thing,” said Bernard Trainor, a retired Marine lieutenant general. Trainor said the Marines are best viewed as a “force in readiness,” capable of doing whatever is necessary, quickly.

For that reason, the Marine Corps should see the fewest structural changes in coming years. The Marines will lose their “war on terror” end-strength increase of 20,000 but the Corps will probably not give up missions.

“Because the Marines have proven very versatile and will continue to be cheaper and smaller … I don’t see a lot coming out of the roles and missions [review],” said Tom Wilkerson, a retired Marine major general and current chief executive of the nonprofit U.S. Naval Institute.

That wasn’t always the case. Just a year ago, there was serious talk inside the Pentagon about scaling back or eliminating the Marines’ beach-assault capability. The so-called “forcible entry” mission has its roots in the World War II island-hopping campaign and was last practiced, in major combat, during the Korean War. Today it’s best represented by the Corps’ amphibious tractor units, plus the 30 or so bulky Navy amphibious ships — “gators,” they’re called — that carry the amtracks near to shore.

The big, slow, thin-skinned AAV-7 amtracks were obsolescent 20 years ago, when the Pentagon and contractor General Dynamics launched development of the Expeditionary Fighting Vehicle. The EFV was meant to be faster on land and sea, better-protected, more reliable and lethal enough to take on enemy armored vehicles.

In short, the EFV was meant to work miracles.

The program was a disaster of competing demands. After a decade of delays and failed tests, all for $3 billion, the Marines were still years from bringing the new vehicle into service. The EFV’s woes dovetailed with huge cost increases and maintenance problems related to the Navy’s new LPD-17 and LHA-6 amphibious ships.

Gates pounced on these programs. “In the 21st century, what kind of amphibious capability do we really need to deal with the most likely scenarios, and then how much?” he said in a May speech last year.

But the Marines fought hard to preserve the amphibious forces and their beach-assault capability. They won the argument. “The cancellation of the EFV is by no means a rejection of the Marine Corps amphibious assault mission,” the commandant said. He ordered speedy development of a cheaper and slower amtrack.

It was the Marines’ inherent flexibility that lay at the heart of Amos’ appeal. “Amphibious ships provide the multi-capable platforms that are the cornerstone of America’s ability to respond to the range of crises that impact our national interests,” he said in January. “They are not task organized for one type of mission, but rather are flexible and suited to many.”

To the Marines who ride inside the gators’ steel bellies, these different missions can look and feel very similar. That’s one result of training that emphasizes performing multiple roles on short notice. “A piece of gear is a piece of gear,” said Chief Warrant Officer Chris Pienkowski, a cargo handler aboard Kearsarge. He could be supporting an impromptu medical clinic one day and an over-the-beach attack, the next.

“This inherent flexibility and utility is not widely understood or appreciated, as evidenced by the frequent – and erroneous – assumption that ‘forcible entry’ capabilities alone define the requirement for amphibious ships,” Amos concluded.

There’s clearly demand for air power that’s lighter than what the Navy provides with its supercarriers, and more flexible than land-based Air Force jets are capable of. The Marines can meet that need with their Harriers, but barely. There are fewer than a hundred of the aging jump jets ready for combat at any one time.

Eyeing a growing need for fast-reacting, sea-based warplanes, the Marines have invested heavily in new jump jets and the ships to carry them. Today, the Corps is on the cusp of its own air-power revolution, carried on the backs of two programs: the tri-service, “fifth-generation” Joint Strike Fighter and the LHA-6 assault ship.

The F-35B version of the Lockheed Martin-built JSF — the Marines want more than 400 of them — is meant to be a stealthy, more lethal replacement for the Harrier. Like the EFV, the Marines’ JSF wants to do everything at once: take off in a short distance, fly far and fast with a heavy weapons load while evading enemy radars, then land vertically.

Not surprisingly, the F-35B, with two motors — one each for forward and vertical flight — has struggled with weight, heat and parts failures. In January, Gates placed the new jump jet on a two-year “probation.” If the F-35B doesn’t improve in that time, “then I believe it should be canceled,” Gates said.

But Amos says he is “absolutely confident” that the STOVL plane will be fixed and promised to personally oversee the new warplane’s development. The plane, he said, will be worth the investment. “With a fully-fielded fleet of F-35Bs, the nation will maintain 22 capital ships – 11 carrier and 11 [big-deck] amphibious assault – with fifth-generation strike assets aboard.”
“Every indication is, this will be a phenomenal capability,” Lt. Col. David Wilbur said of the F-35. Wilbur was commander of Marine All-Weather Fighter Attack Squadron 332, an F/A-18D unit shuttered in 2006 and slated to reactivate once the F-35B is available.

The LHA-6 America class is the other missing piece of this future Marine air force. Kearsarge and the rest of today’s “big-deck” assault ships balance aviation facilities with floodable well-decks for carrying amtracks. The next two assault ships under construction have more hangar space in place of the well-decks. America and her sister will be able to carry and support 30 jump jets, compared to the four that are standard today.

“It is, for all intents and purposes, a light aircraft carrier,” Navy Capt. Jerry Hendrix said of America. In an article in Naval Institute’s Proceedings magazine, Hendrix proposed that the Navy reduce its force of $14-billion supercarriers in favor of a larger number of $2-billion light carriers like America. “Right now we have narrowed our approach options down to 11 big carriers on how to penetrate an anti-access, area-denial environment,” Hendrix said. “We need to multiply our options.”

That’s a view Gates, in principle, shares — despite his hard stance on the F-35B’s development. The military “must have the maximum possible flexibility to deal with the widest possible range of scenarios and conflicts,” Gates said last year. He expressed concern over concentrating striking power in supercarriers, each of which “could represent potentially a $15- to $20-billion set of hardware at risk,” he said.

Only the Marine Corps is in a position to institutionalize a light-carrier capability and diversify America’s air-power options.

Libya proved that the Marines could turn a gator into a light carrier. But can the Corps successfully develop and field the hardware that might help permanently establish this capability? And can it gently put the storied amphibious warfare traditions of Iwo Jima, Tarawa and Inchon on the shelf and begin building new ones steeped in just as much pride?

David Axe, a member of the Breaking Defense Board of Contributors, is a freelance war correspondent and author. His most recent book is a graphic novel, War is Boring. David is a contributing editor at World Politics Review.