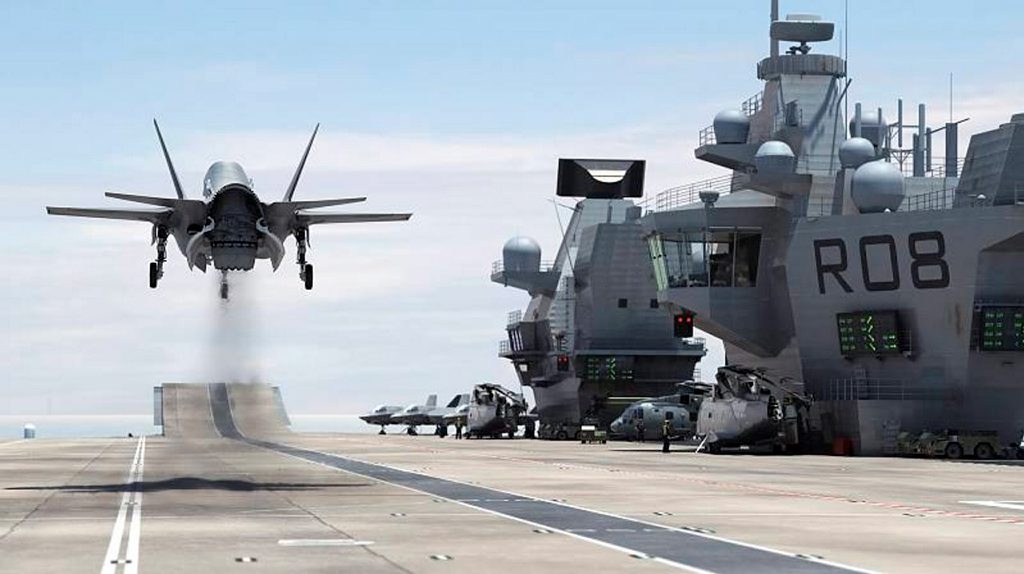 PARIS AIR SHOW: First it was cyber. Now I find myself covering ships at an air show. Ok. They are aircraft carriers so I guess we can give the Queen Elizabeth carriers a pass. The big news here? The first of the two ships should sail for the first time later this month, or maybe next month — depending on the weather and the tides. That was the word from Rear Adm. Keith Blount of the Royal Navy who came here for a visit of several hours, much of which he spent with the press.

Why did he spend so much time with the dreaded media at an air show? Probably because the main combat power of the ship (aside from SAS, Royal Marines and anti-submarine helicopters) will derive from the 36 F-35Bs the QE class can carry into battle.

Among the QE class’ most intriguing characteristics will be its completely clear and uncluttered flight deck which will allow a large number of helicopters to be stationed ready for takeoff or a large number of F-35s. Since the QE class was reportedly built from the start with an eye to putting Special Air Service and Royal Marines directly into harm’s way, supported by Merlin helicopters and F-35Bs, there’s an obvious logic to this deck.

And Blount told reporters the carriers would carry a Royal Marine Special Purpose Task Group of indeterminate size on every mission. In addition, they will sail with the best Combat Search and Rescue (CSAR) capabilities they can carry, given whatever other missions they’ve got, Blount told us. One of the more likely aircraft to be added to the ship to support these is some version of the V-22. There have been persistent rumors that Britain wants to buy some, but nothing definitive has been said publicly.

And that’s why we’re talking about ships at the air show.