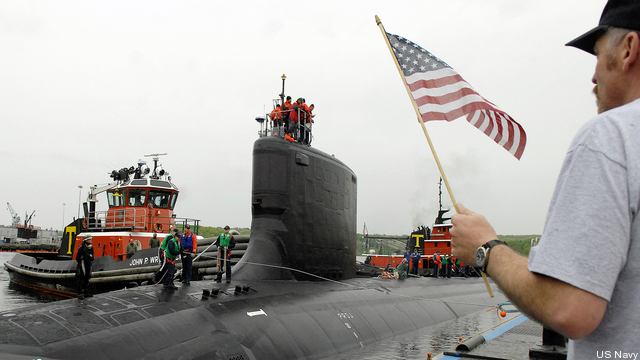 CAPITOL HILL: The odds keep getting better that the Navy will get two Virginia-class nuclear attack submarines in 2014 instead of one, with senators of both parties chiming in this morning to support yesterday’s pro-sub action by the House, and the Navy’s top acquisition official pointedly did not say no.

Congress never liked the plan to cut costs by deferring a Virginia until 2018, and yesterday the House Armed Services seapower panel released draft language authorizing, but not requiring, the Navy to buy a second sub in 2014. (The mark was formally approved at a short subcommittee session today that focused on the Littoral Combat Ship). This morning, on the opposite side of Capitol Hill, a Senate hearing ostensibly on the Marine Corps derailed into a bipartisan love-fest for the Virginia.

“If we did what the HASC seapower subcommittee just did, we could ensure that the two [a year production rate] would remain constant,” said Sen. Kelly Ayotte, as she prodded Assistant Navy Secretary Sean Stackley on the sub program. “This is something I am going to be proposing and pushing,” she went on. “It only makes sense in terms of not only the cost but also making sure that we maintain our attack submarine fleet… That’s very, very important,” she concluded before apologizing for running over her allotted time.

“As long as you’re prepared to speak about submarines, you may continue,” chuckled subcommittee chairman Jack Reed, Democrat from Rhode Island, a submarine-building state.

Then another sub-state Senator, Connecticut Democrat Richard Blumenthal, chimed in to applaud both Ayotte and the House. “I’m glad to see that the House committee has adopted that approach,” he said.

“We may be able to have bipartisan agreement on this,” Ayotte said, smiling, from across the table.

Replied Blumenthal, “I think we will.”

In the crossfire from all this goodwill was the Navy’s acquisition chief, Assistant Secretary for Research, Development, and Acquisition Sean Stackley. While Stackley has publicly endorsed the possibility of getting an extra Aegis destroyer in the budget, he’s been more cautious about the feasibility of adding a submarine. Under Ayotte’s prodding, however, he came right up to the edge of endorsing the idea.

When a Virginia submarine is moved from the tail-end of the program back to 2014, Stackley told the subcommittee, “the up-front cost for that second boat in 2014 is offset by savings across the program in later years,” because of the more efficient pace of production. “At the bottom line for the Virginia multi-year [procurement contract], nine versus 10 boats, it is near neutral.”

The problem in 2014 is simply that there is not enough money in the Navy budget for that year to fully fund a second sub, Stackley explained. But the cost of certain ships — carriers and amphibious warfare vessels — is already spread out over multiple years through what’s called “incremental funding,” which would be one way of handling the extra submarine. From the Navy’s standpoint, the problem is simply getting an equivalent exception to “must fund the entire ship in one year” rule for the Virginia.

“It’s important that we discuss… this alternative to full funding so that everyone can assess the value to the force, the value to the industrial base, and frankly the affordability that adding that second boat provides,” Stackley said, “and weigh that against the importance of the full funding policy….Getting that second boat in 2014 is the most affordable way to buy another submarine.”

The full House Armed Services Committee hasn’t formally passed the language authorizing a second Virginia sub in 2014 — let alone the full House — and the Senate has yet to introduce any language of its own. But certainly the momentum is building.

Edited at 8:30 pm; an earlier version of this story misleadingly implied that some submarine manufacturing occurs in New Hampshire.