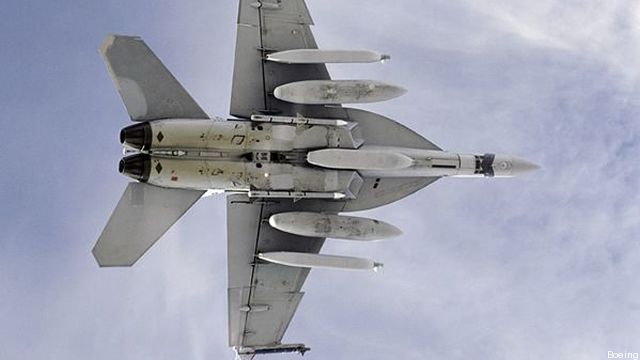 “The F-35 continues to delay and delay,” Christopher Chadwick told a group of reporters at Boeing’s defense headquarters here. “Yes, the F-35 has all-aspect stealth, but that is used in a relatively small part of the combat envelope.”

In a clear signal to F-18 supporters in the Navy, Chadwick added this barb: “With the F-35 continuing to have technical difficulties and to continue slipping to the right, they have to make sure they have the right capability for the men and women who go in harms way.”

Chadwick offered his critique of the Joint Strike Fighter in a larger context: “There is a rebalancing we are seeing of the balance between social and defense needs.” And that means, quite simply, declining defense budgets both in the United States and in Europe.

One of the effects of that, especially as the US withdraws from Afghanistan, will be a decline in the unmanned systems market (or remotely piloted vehicles, for those Air Force devotees), Chadwick said. Boeing analysts are “already predicting a 20 percent reduction in the global UAS market.”

So where will the cuts come? “With the drawdown what you’re seeing is the customer starting to define where they really need capabilities. They need it on the carrier deck,” he said, and they will need it on the low end of the market. There is also an “unmet need” for unmanned rotorcraft.

To meet those needs, Chadwick said, Boeing offers its version of the Unmanned Carrier Launched Airborne Surveillance and Strike System (UCLASS), the Unmanned Little Bird and the A-160.

Another reason for the decline in the market is the simple fact that no one has figured out how to manage the enormous amounts of data already being gathered by the existing fleet of UAVs (RPVs for Air Force folks), the head of Boeing Military Aircraft told us. “What’s happened is, the men and women aren’t flying, but they are on the ground processing data and no one has cracked the code on managing the data,” he said. And the means the services just don’t think they need to buy more platforms to collect data they couldn’t usefully process.

In other news, Chadwick offered a broad hint that Boeing hopes to be being the prime integrator on the Air Force’s next-generation bomber fleet, the Long Range Strike program. Most details of the program are highly classified so we don’t know much about it, beyond repeated service declarations that it would probably include an unmanned or optionally manned capability and it would need to be able to operate in anti-denial, anti-access environments, which means it would boast stealth capabilities.

“We plan on being a big player on that,” he said initially. I pressed him for more information, asking whether Boeing planned to be a prime on LSR and he went this far” “Our core competency, what differentiates us… is we are a platform builder and a platform integrator.” So it would appear Northrop Grumman has some serious competition brewing here.

Finally, no defense story would be complete these days without at least one mention of sequestration. Chadwick said one of the biggest effects of the mandatory budget cuts that would be triggered Jan. 2 by the Budget Control Act is already being felt.

“What we’re seeing is the lower-tier suppliers are starting to walk away from the defense business because of the uncertainty of the market and the onslaught of” acquisition process and oversight. I asked for some examples and he said he didn’t have any close at hand. But when we hear some, we will let you know. Dear reader, if you know some, please let us know.

Chadwick added that Boeing began planning for the downturn two years ago and has reduced its executive ranks by 18 percent over last three years, its managers by 15 percent and his division, Boeing Military Aircraft, is down in overall numbers about 10 percent.