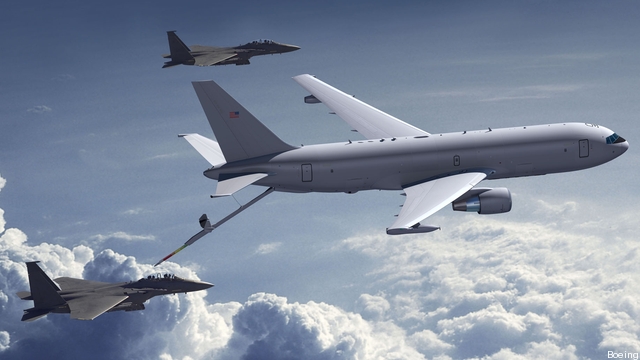 He said Boeing sees “about a five- to seven-year window of opportunity that only comes along once in a while in the international arena.”

Most of that growth, Chadwick made clear, is expected to come from Asia, Brazil and the Middle East.

Boeing’s defense business – which includes a broader array of products – expects to grow its international defense sales by an even more robust 8 percent, rising from 17 percent today to 25 percent, company officials said.

One of the more interesting sources of those increased international military aircraft sales is likely to be the new airborne tanker aircraft. Chadwick, who described things as at “the quiet interest” stage, would not identify any of the prospective customers. The possible sales would be largely pegged to the fact that the U.S. is buying the tankers, making it the dominant tanker aircraft in the world. That would seem to indicate the inquiries were coming from U.S. allies.

One of the issues Pentagon official have quietly voiced concerns about as the tanker program gets underway is the fact that Boeing will be integrating a glass cockpit onto the modified 767 aircraft. Chadwick said Boeing has extensive experience doing this sort of work and had deployed a substantial number of civilian aircraft engineers to the tanker program to reduce risk. “That’s one of our core competencies,” he said, noting Boeing’s recent work putting a new cockpit in the rear cockpit of the Super Hornet.

“We have spent an inordinate amount of time over the last couple of years looking at risks and opportunities, to where I would say we are further along on the tanker program than we probably have been on any development program in recent history,” he added.

Taken as a whole, Chadwick said he thought his unit was extremely well poised to cope with the next five to seven years of challenging budgets. Military aircraft builds, the F-15, the Super Hornet, the Chinook, the V-22 and the Apache, all aircraft either in the midst of substantial production runs or facing substantial upgrades that amount to almost the same thing. He described these as “rock solid strong programs” that would bring good cash flow into Boeing’s coffers.

On the other side of the ledger are programs just coming into their own. Among these he counted the new P-8, the airborne tankers and Phantom Eye.

Then, to keep the cash flowing in the future, Boeing is investing in programs such as the Navy’s UCAS, the next generation bomber and the T-X trainer aircraft, Chadwick said.