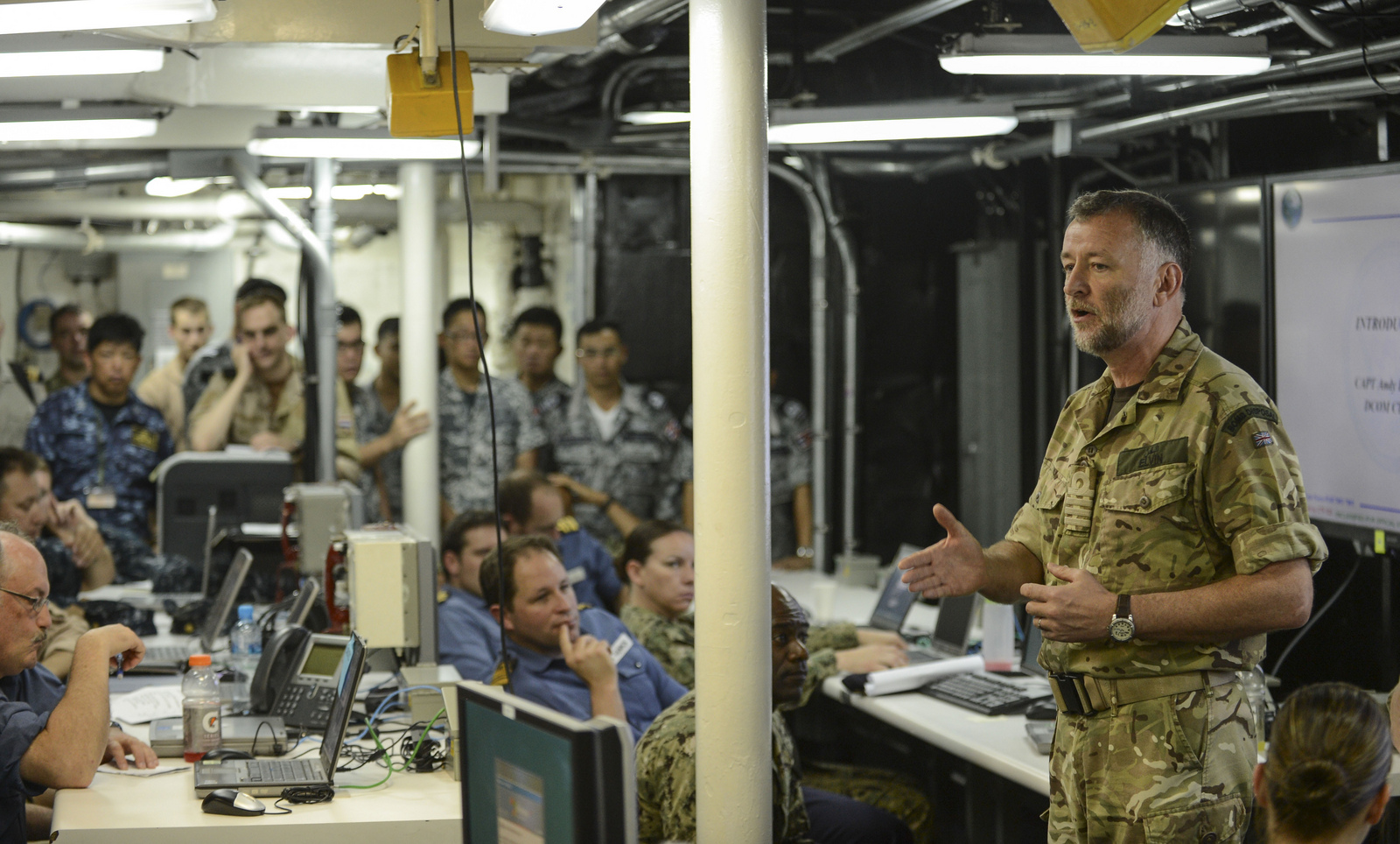 A British Royal Navy officer briefs a “sea of uniforms” from different nations.

WASHINGTON: A new report calls for a major revamp of the rules for how the US and a handful of allies develop and share critical military technologies, one modeled on the storied Five Eyes intelligence-sharing agreement between Washington and a several friendly governments.

The paper, set to be released Tuesday afternoon during an event at the Atlantic Council, outlines an ambitious new policy of “harmonizing policies and practices in areas including regulating direct foreign investment, technology transfer, research and development, supply chain, and communications and information-technology infrastructure security,” to ensure that the US and allies are rowing in the same direction on sensitive new technologies, writes Bill Greenwalt, former deputy Defense undersecretary for industrial policy.

Greenwalt’s use of the Five Eyes agreement — in which the US, UK, Canada, Australia, New Zealand share sensitive intel with minimal red tape — as a model for a new era of technology transfers is timely, as the US scrambles to stay ahead of China and Russian advancements in AI, hypersonics and other commercial technologies thought to be critical to future conflicts.

The paper, obtained early by Breaking Defense, arrives as policymakers increasingly fret over the reluctance of some major Silicon Valley firms to work with the US and other western governments, in contrast to the Chinese and Russian models, where government often compels industry to work for it.

The rules that govern the National Technology and Industrial Base (NTIB) law — which includes Canada as part of the US industrial base and was expanded by Congress in 2016 to include the UK and Australia — need major revisions, Greenwalt writes, and expanding the NTIB “offers the opportunity to immediately add 40 percent in capacity to the US industrial base,” by providing “additional scale and fill some of the manufacturing holes that currently exist.”

The report also contains several legislative reforms Congress would have to undertake.

The current NTIB members have somewhat looser contracting rules than exist in the US for small tech companies to jump into the military marketplace Greenwalt says, thereby offering “a significant comparative advantage to the United States,” if some of the walls put in place by Washington were to come down. Each country maintains their own defense-unique specialties “and a growing commercial base to work with its military-unique base. It will be important for the United States to leverage these capabilities” in the future.

But given the strict tech transfer rules and laws that limit what even the closest allies can buy from the US, and as the most important military technologies move from tanks and howitzers to communications networks and software, it has become increasingly difficult to work together on innovative projects. These export-control roadblocks stem from the Cold War when the United States maintained a technological dominance that no longer exists and was at pains to keep advanced technology out of the hands of the Soviet Union and its satellite states.

“The result is the US technology-control apparatus now promotes US technological inferiority, by primarily controlling technology widely available to great-power adversaries, while disincentivizing research-and-development cooperation with allies and the commercial market,” Greenwalt writes.

On Tuesday, Peter Navarro the White House’s director of Trade and Manufacturing Policy, published an op-ed in FOX News lauding the Trump administration’s new Conventional Arms Transfer policy which, he says, “has put into sharp focus the critical synergies between a globally competitive defense industrial base, a strong domestic economy, and a more effective geo-strategic competition with rivals such as China and Russia.”

Last year, as part of the Trump administration’s push to sell more US-made weapons abroad, the State Department said that is was planning to increase the size of the staff which handles arms transfers, while launching changes to its International Traffic in Arms Regulations, or ITAR, which governs how and what US companies can sell overseas.

In July, the State Department said it was kicking off the new Conventional Arms Transfer policy, though defense industry groups said the new rules remained murky, even as the number and size of arms sales boomed.

While those policies in many ways focus on Foreign Military Sales, the Pentagon’s chief weapons buyer, Ellen Lord, has for months been working on a major overhaul of acquisition rules — aiming to simplify how the military contracts for everything from new AI algorithms to hammers — but sharing those technologies with allies is a much wider, more complex effort.

Greenwalt’s paper tackles some of those deeper issues — sharing cutting-edge technologies with allies to boost the collective defense with discrete, software-enabled weaponry and machine learning tools. He frames the effort’s ultimate goal as developing a “process leading to a harmonized NTIB defense free-trade area for goods, services, and—most importantly—ideas and research, within a defined, trusted community that will work to maintain the technology dominance of the United States and its closest allies.”

Despite the closeness of the intel and military ties between the NTIB countries, transferring military technology between these countries has grown more difficult as technology advances. This is primarily due to a US export-control system that was designed for a time when the United States maintained a technological dominance that simply no longer exists.

The result, Greenwalt writes, is that “the US technology-control apparatus now promotes US technological inferiority, by primarily controlling technology widely available to great-power adversaries, while disincentivizing research-and-development cooperation with allies and the commercial market.”