China Can Win Big In The Pacific By Backing Down: Edward Luttwak 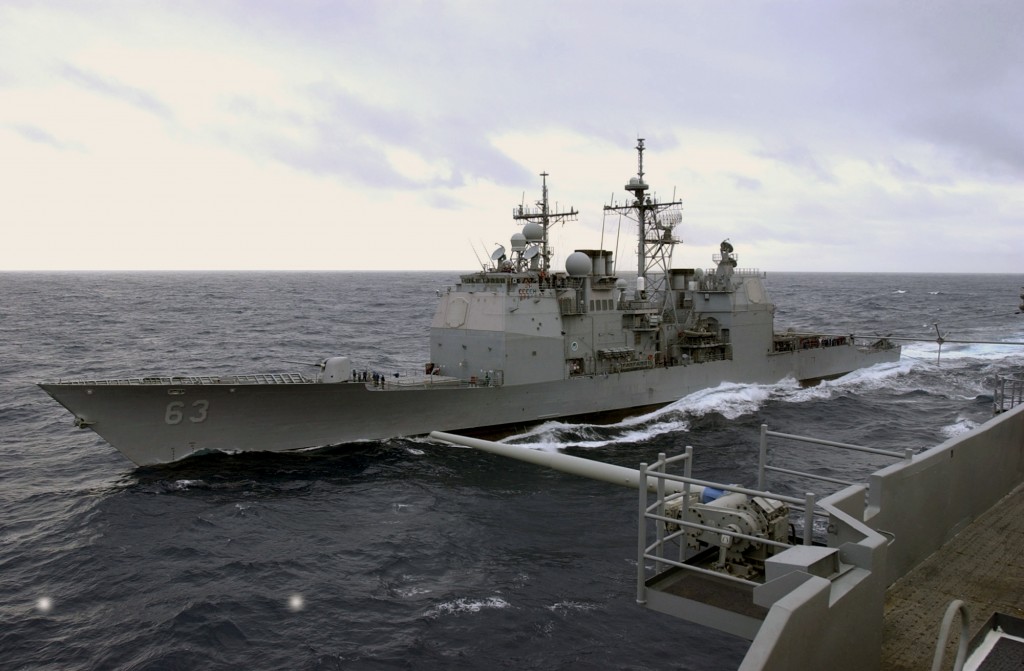 The USS Cowpens, which nearly collided Dec. 5 with a Chinese vessel trying to force it away from China’s new aircraft carrier.

WASHINGTON: China is hurtling headlong towards a major conflict in the Pacific – but that course can change, one of America’s most creative strategists says.

Just four years ago, Beijing welcomed a delegation of 600 Japanese lawmakers and other influentials led by political kingmaker Ichiro Ozawa, and China-Japan relations were warming up so fast that some in Washington were getting worried, Edward Luttwak noted this morning.

Then China starting using ships, planes, and inflammatory diplomacy to assert its long-dormant claim to the Japanese-controlled Senkaku Islands, a running conflict whose latest escalation was Beijing’s declaration of an Air Defense Identification Zone (fondly known as the ADIZ to national security wonks) over the disputed waters. Beijing has picked fights with its neighbors in a long arc from India to South Korea over the last four years.

But China’s leaders can stop what they started and return to the course they were on in 2009. They managed to shift from aggressive to peaceful policies twice before, after they provoked Taiwan Straits crisis in 1994-1995 and after they invaded Vietnam in 1979, and they can do so again.

Conflict is a choice, not an inevitability, said Luttwak, one of the country’s most influential and controversial strategists. “That is why you have a government, that’s why you have diplomats,” he told the audience this morning at the Wilson Center. “You do what China did [before], which is the ‘peaceful rise,’” a low-key strategy that dates back to the 1980s reformer Deng Xiaoping but which President Xi Jinping reiterated recently. “That is what successful — successful — great powers do; they reassure, in order to prevent their neighbors from making alliances against them,” said Luttwak, “and that is what the policy was for many years.”

That doesn’t mean Luttwak is particularly optimistic China will change course, just that he thinks it’s possible. While he considers China’s rise out of poverty to be a human triumph and an engine of global growth, Luttwak said, “as a strategist, however, I now believe this is going to end very badly, very badly indeed.”

“I’m pessimistic about outcomes because there appear to be incentives built into the system in China that reward tactical adventurism,” he said, or at least fail to rein in overly aggressive local commanders.

This April, for example, Chinese troops crossed into Indian-claimed territory and set up camp near the strategic Karakoram Pass through the Himalayas. Was this some strategic ploy directed from Beijing? Not likely, said Luttwak, First, it nearly scuttled a high-level visit to New Delhi by China’s premier scheduled for May, a priority for the civilian leadership. Second, of the two regional military commands that share responsibility for the Indian border – the Lanzhou Military Region in the west and Chengdu in the east – only Lanzhou forces got involved, while Chengdu did nothing, which suggests even the military did not have a coherent plan. “In one, maximum alert,” said Luttwak. “In the other [military region], totally quiet and normal.”

Plan? What Plan? In the high-altitude crisis in the Himalayas this spring, only one of China’s two regional commands along the border — Lanzhou — went on alert. The other — Chengdu — stayed quiet.

Through all the tensions and terrors of the Cold War, “the Russian military were under classic Marxist-Leninist orders of ‘no adventurism’ … Don’t try to make a career by showing how tough you are, because you’ll be fired,” Luttwak said. So what happened to the Lanzhou commander who sent his troops across the border? “I don’t believe he was demoted, I don’t believe he was fired.” The Chinese naval officer who nearly rammed the US Navy cruiser Cowpens for the sin of coming “within 45 kilometers” of China’s new aircraft carrier probably won’t be fired either.

When he visits China and talks to military officers about their civilian leaders’ declarations of peaceful intent, Luttwak said, “the military people always say the same thing, ‘ah, these are old guys; all these people, they don’t know.’”

But Chinese civilian rhetoric and its paramilitary coast guard have been just as provocative as the regular military. As a result, Beijing has stumbled into a strategy of offending most of its neighbors at once: Japan, India, Vietnam (which Japan and India are now helping build a submarine fleet), the Philippines – “It’s hard to find a quarrel with the Philippines,” he said, “you have to make a real effort” – and even South Korea. “The least necessary Chinese quarrel is with the Republic of Korea,” he sighed, “the only country I saw entering voluntarily the Chinese orbit, becoming voluntarily a Chinese client, until China decided to kick them in the shins over a submerged rock.”

“You’re supposed to quarrel with people one at a time – but if you’re getting so rich so fast, you shouldn’t quarrel at all,” said Luttwak. In China today, however, we see “the triumph of emotion. [The desire to] humiliate foreigners, beat foreigners, overcomes the rational mind that said, ‘do nothing, just wait.’” The best strategy for a rapidly growing country is to reassure its neighbors, be patient, and to keep getting stronger until people give you what you want without a fight.

That’s what Germany should have done circa 1900, instead of heading down the path of provocation to World War I. Kaiser Wilhelm’s Germany is a favorite analogy of scholars (alarmists invoke Hitler’s Germany instead) because its combination of rapidly growing power and deeply rooted insecurity – like China’s the result of generations of foreign invasion and occupation – made it a country with a chip on its shoulder. But the lesson isn’t that World War I was inevitable: It’s that it wasn’t.

“All they had to do was have no army and no navy and they’d become the kings of Europe” by their economic influence, “which is exactly what is happening now,” said Luttwak. “The only reason to mention Germany – which Sinologists have done before I did – is because it’s a country that could have won everything by not having an army and a navy, [and] that is China’s position.”

“It’s a very unusual  situation,” said Luttwak. “You can win by disarming.”