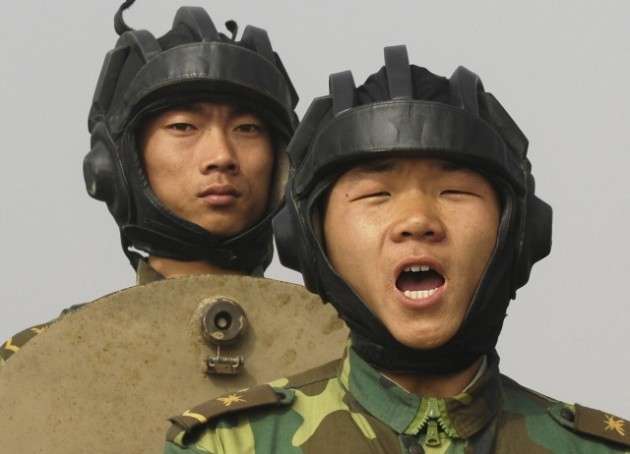 A People’s Liberation Army soldier during a demonstration for visiting US officers.

WASHINGTON: From this city’s perspective, China looks like a rising giant, liable to dominate its smaller neighbors unless America stands firm. Defense Secretary Chuck Hagel will likely carry soothing words of reassurance on this very subject to Seoul and Tokyo when he travels there next week.

From Beijing’s point of view, however, it is China that looks like the underdog – and, at least in the near term, they’ve got a point. Unfortunately, this sense of relative weakness doesn’t make the dragon pull in its horns. To the contrary, feeling vulnerable makes the Chinese skittish in dangerous and provocative ways.

Despite two decades of investment, China’s military is still outgunned by Japan, let alone by the US. “Japan has the strongest navy and air force in Asia except for the United States,” leading analyst Larry Wortzel said Wednesday at the Institute of World Politics, pointing at a map of northeast Asia: “This shows their air force bases and how they’re postured….”

“You said Japan?” interrupted an incredulous member of the audience.

“Japan, that’s correct, absolutely,” said Wortzel. “The most modern, the most effective. [They’re] still restricted by Article 9 of the Constitution” – which “forever renounce[s] war as a sovereign right of the nation” – “but you don’t want to mess with them.”

And that’s just one US ally. South Korea has a formidable military of its own. Then there’s America’s own military which, despite painful budget cuts, remains the largest and most high-tech in the world, at least for now. So the balance of forces in the Western Pacific still favors the democracies.

That’s the geostrategic good news. The bad news is that Beijing isn’t handling it well.

Two centuries of insecurity have conditioned Chinese leaders to be a little light on the trigger finger. So while Chinese strategy documents consistently speak of self-defense – the current official term is “active defense” – “I think you have to not be very literal when you read this stuff,” Wortzel said. “It’s a fairly prickly and aggressive military doctrine inside a defensive structure.”

It’s not that China was entirely unprovoked in these cases. In 1950, they saw US forces steamrolling over their North Korean ally and surging towards the Chinese with no guarantee the Americans would stop at the Yalu. (Indeed, Gen. Douglas MacArthur wanted a wider war with China, which is why Harry Truman finally fired him). In both 1962 and 1979, there had been skirmishes along the disputed borders for years. But in each case, the Chinese response was to escalate – massively, bloodily, and unexpectedly.

These examples aren’t just ancient history. The principle of preemption is a big part of China’s “active defense” doctrine today, said retired Rear Admiral Michael McDevitt, speaking on a panel at the Wilson Center earlier on Wednesday. “They don’t have to wait and take the first shot,” he said. Indeed, Chinese doctrine does not limit itself to preempting a military attack, he said: “China claims ‘if you act diplomatically to challenge our sovereignty….we have the right to preemptively attack as part of our active defense strategy.’”

“If you’re a country that lives in the shadow of China, how would you feel?” asked McDevitt. “China says, don’t worry, ‘it’s only defense, I’m only defending myself against attack,’ but [China] can also argue that ‘I don’t like what you’re doing, and I see that as a threat to my sovereignty, and I’m going to whack you.’”

China’s broad definitions of sovereignty and self-defense are especially unnerving given its long-running standoffs with Japan over the Senkaku Islands, known as the Diaoyus in Chinese, and with the Philippines over the Scarborough Shoal.

“In China’s view, they are non-aggressive because they do employ predominantly civilian vessels that are not heavily armed,” said Danish scholar Liselotte Odgaard at the Wilson Center discussion. But China claims for both its paramilitary and military vessels the right “to do as we please, when we please, without notifying you, and that’s totally unacceptable to the other countries,” said Odgaard. That’s because the People’s Republic feels it has some claim to any territory once controlled by the Imperial China – however briefly and however loosely – while its neighbors argue that jurisdictional rights from the 19th century, let alone from earlier, have long since expired.

The Chinese position is that “we’re being generous here by letting you use this area,” Odgaard said. From Beijing’s point of view, in other words, they’re already making a concession on the disputed territories by not just kicking the Japanese, Filipinos, and others out.

That said, there is a distinctly pragmatic dimension to this “generosity,” because the People’s Liberation Army is painfully aware it lacks the firepower to kick them out. Unless China resorts to nuclear weapons, Japan and Korea can defend themselves. While weaker, the Philippines have had US backing for over a century, and Vietnam chewed up China’s invasion force in 1979 without any outside help. What China has been struggling to do for at least the last two decades is develop a military that can keep America at bay with what US strategists call an “anti-access/area-denial” (A2/AD) defense. How far the PLA has actually moved towards that goal is the subject of the second part of this article, out next week.

Editor’s note: We had originally intended to publish the second part of this article (available here) on Friday the 27th, but that plan was overtaken by breaking news about the Defense Department’s plans to cope with a federal government shutdown.