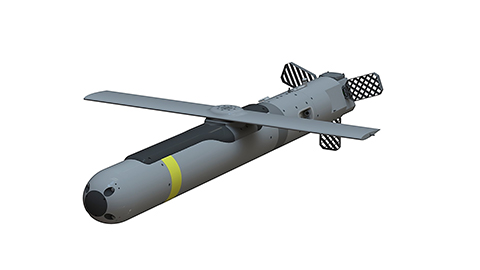 WASHINGTON: Small insurgent groups have long used speed and distance to try and outrun American precision-guided weapons launched from loitering drones and attack aircraft. But a new weapon being employed by U.S. special operators is trying to erase that tactic from their playbook.

A lightweight glide missile, smaller and more powerful than a Hellfire and fired from a C-130 gunship tens of thousands of feet above the battlefield, is about to start heading to the force by the thousands, according to SOCOM documents about an upcoming contract award.

SOCOM purchased several dozen Small Glide Munitions from Dynetics, a small firm in Huntsville in 2017. The SGM appears to have proven its value to commando leaders who are readying a contract for about 4,000 more of the 59-lb munition over the next four years.

The SGM can travel more than 20 miles and slam into targets moving up to 70 mph with its 36-lb. warhead, which is not only more powerful than a Hellfire, but clocks in at almost half the weight of the iconic 100-lb. munition.

The company was able to pack that punch into a lighter tube thanks partly to the fact that the SGM is unpowered, and uses wings that unfold after launch to glide to its target. A company official told me that the weapon was designed to be modular so the munition could fit on a variety of platforms, and components can be swapped out.

In a justification document explaining why it was not conducting a full and open competition to purchase the SGM, SOCOM said it needed to “expeditiously complete development, integration, test, and fielding a SGM capability for the AC-130W, AC-130J, and other Special Operations Forces (SOF) platforms” because “the combat need is immediate.” The document went on to say that the only other compatible munition “was removed from service on USSOCOM aircraft due to failure to achieve lethality performance, and high cost to redesign to meet mission requirements.” 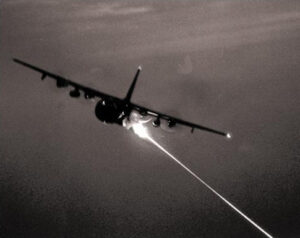 Those missions tend to be small, fast-moving, and rely on precision firepower to protect the American forces spread among small groups far from bases or consistent air support. And the issue of civilian casualties looms large.

SOCOM  had used several other munitions to fill the requirement for a lightweight munition, but decided that none really fit the bill. The command initially considered Raytheon’s Griffin, Northrop Grumman’s Viper Strike, Textron’s G-CLAW, and Dynetics’ SGM. But according to the justification document,

The Dynetics official told me that the company is exploring putting the munition on other light attack aircraft and helicopters, and that “nothing that would preclude it from unmanned or light aircraft or gunship derivatives.” The official — who requested to speak anonymously due to security concerns — added that he thinks a modified version of the SGM could be a good fit for the Army’s lightweight precision munition program, which is looking to get a new generation of lightweight bombs on drones and helicopters.

The Special Operations Command’s missile spending spree comes amid a larger Pentagon push to rapidly develop and acquire precision munitions during its two-year break from sequestration, which runs out in 2020. And the commandos have the money to do it. The 2019 SOCOM budget request was $13.6 billion, up from $12.6 billion in 2018, and $11.8 billion in 2017. The latest budget would also pay to grow the force from 70,200 to 71,900, a massive uptick from the pre-9/11 size of about 33,000 troops.