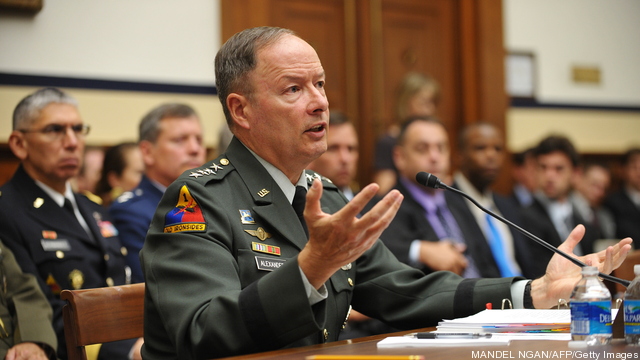 Omaha: The head of both NSA and Cyber Command called today for more authorities to protect and defend America’s cyber networks, presumably an indication the Pentagon feels the need for the right to engage in offensive cyber operations.

“We have to have more authority to defend ourselves in cyberspace,” Gen. Keith Alexander told roughly 1,000 people at the Strategic Command space and cyber conference.

Alexander opened his speech saying he was going to describe what’s “going on in cyberspace and what do we need to change.” Then he offered the example of the German’s use of disruptive technology, using radios and tying air power to its land forces to defeat the French and British in the Second World War, to point to uses of force “in a way that no one has anticipated.”

All his examples pointed to the use by other countries of offensives capabilities. He listed seven of what were baldly labeled “Russian Attacks,’ ranging from denial of service attacks on Estonia in 2007 to similar attacks on Latvia last year. There was no delicate talk of the difficulties of attribution during Alexander’s talk. It was all about protecting America’s networks.

The stakes, Alexander made clear, are huge and are not limited to the military. He restated previous comments about the “largest wealth transfer in history” taking place as adversaries steal America’s intellectual property. He said more than $1 trillion has been stolen this way. It amounts to a huge wealth transfer at a time when the United States can ill afford to lose so many lucrative revenue sources.

Alexander’s comments came the day after the Pentagon released its toughest policy language on cyberwar. My colleague Ellen Nakashima at the Washington Post got her hands late yesterday on a report for Congress in which the Pentagon laid out its most explicit cyberwarfare policy to date, stating that if directed by the president, it will launch “offensive cyber operations” in response to hostile acts.

Her story said: “Those hostile acts may include ‘significant cyber attacks directed against the U.S. economy, government or military,’ Defense Department officials stated in a long-overdue report to Congress released late Monday.” Sens. Carl Levin and John McCain had pushed the Pentagon to release the Section 934 report. One of the cyberwarfare “gaps” they noted in a July 20 letter about the need for the tardy report to Defense Secretary Leon Panetta is “development of a declaratory deterrence posture for cyberspace” and what constitutes an act of war in cyberspace. The report sidestepped most of those issues. The White House will have to decide these issues, with input from the military and intelligence agencies.


The deputy commander of Air Force Space Command, Lt. Gen. Michael Basla, told today’s conference after Alexander spoke that “we are also going to build a cyber offensive capability.” Space Command is responsible for Air Force cyberwarfare. This comes on top of a recent declaration by Regina Dugan, head of the Defense Advanced Research Projects Agency (DARPA) — the guys who invented the Internet — that they would develop offensive cyber capabilities and that the U.S. will also combine cyber attacks with so-called kinetic actions. Kinetics, to translate from the military, is the use of explosives, bullets or warheads to destroy something.

Space experts have long argued that the biggest threat to satellites isn’t jamming or something like the Chinese anti-satellite test but an attack on a satellite ground station, which would destroy the ability to gather and distribute satellite data and take a great deal of time and money to replace. Cyber experts note that the Internet relies on crucial switching centers. Destroying those or some of the main clusters of cables that carry Internet traffic could cripple network access.