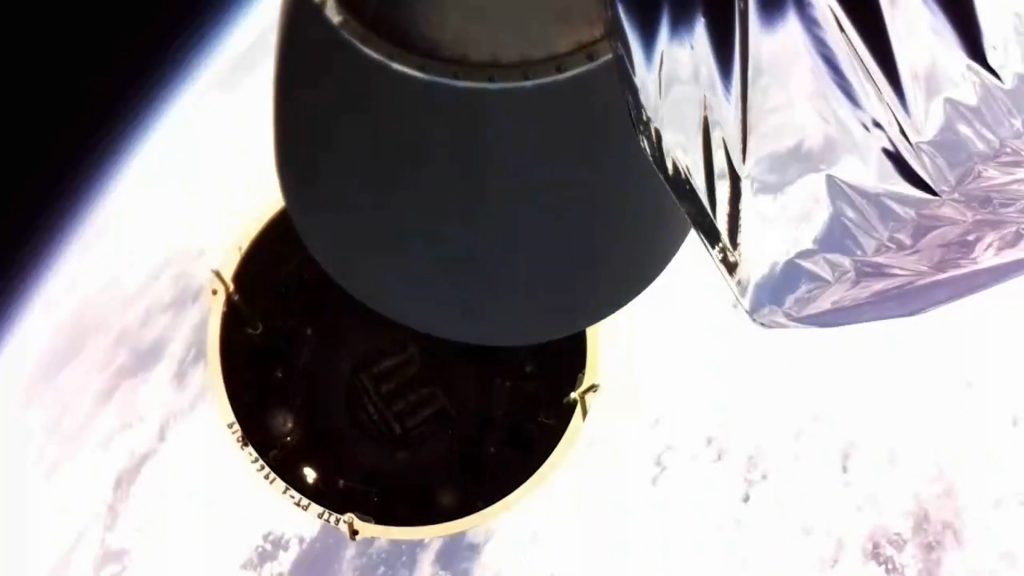 “Most of the defense industry is not known for being super fast” or for taking risks, he told me in an interview today. “We got it to orbit super fast, and we took very high risks.”

DARPA’s goal for the R3D2 (Radio Frequency Risk Reduction Deployment Demonstration) was to demonstrate a new type of light-weight, small-volume antenna to help validate concepts for a resilient sensor and data transport layer in Low Earth Orbit (LEO) – a capability being pursed by the Missile Defense Agency, the Air Force and the Space Development Agency (SDA) for a variety of missions including missile defense and space-based Internet communications. It was also to demonstrate rapid development to launch capability by relying on commercial acquisition practices, with the program taking slightly more than 18 months from contract to launch (the latter was delayed about a month due to the government shutdown earlier this year.)

“The R3D2 mission has been successful thus far, both in demonstration of rapid acquisition for small satellite and launch capabilities, as well as successful deployment of the high compaction ratio antenna,” a DARPA spokesperson told me today.

But Stapp says that his ultimate goal for the project was to prove both to the company’s management, as well as to its government customers, that the slow, risk averse culture of defense companies can be changed. He sees his team as a “small start-up within a major prime” that can rapidly “pull commercial technology in” and marry it to the advantages of being a big company with experience in running national security space programs. He says that, besides having “the best systems engineers,” the big primes have process advantages that commercial firms don’t in dealing with classification and the contracting complexities of working with DoD and the Intelligence Community.

With DoD and the IC increasingly turning to the commercial satellite industry to more rapidly develop and deploy innovative technology across all of its space missions, it only makes sense that the traditional national security space prime contractors are seeking ways to ensure a place in the new market paradigm. Boeing, for example, last year bought Millennium Space Systems to acquire its small satellite technology and low-cost, rapid acquisition model.

For R3D2, Northrop Grumman served as the integrator, working with antenna maker MMA, commercial bus provider Blue Canyon, and software-defined radio firm Trident systems. The 150-kilogram satellite was launched on March 28 by Rocket Lab from New Zealand (yes, the land of huge trout and the Morepork owl) on an Electron launcher that had to be specially modified to carry its weight because Rocket Lab usually launches very small cube-sats rather than the refrigerator-sized R3D2. The total cost of the satellite was $25 million.

The R3D2 now will spend the next six months calibrating its unique membrane antenna to establish its survivability and radio frequency (RF) gain capability. The antenna, which Stapp explained is “compressed into a small volume and then blooms on orbit” could enable multiple missions that currently require large satellites, including high data rate communications. “It’s never been done before, so calibration is critical to getting the correct RF signal,” he added.

Indeed, Fred Kennedy, newly appointed head of DoD’s Space Development Agency and the man who oversaw the R3D2 project in his former job at the helm of DARPA’s Tactical Technology Office, told reporters at Space Symposium 2019 in Colorado Springs last month that finding a maker of small cheap antennas for spacecraft was one of his holy grails.

DARPA explained that the R3D2 project is related to, but separate from, its Blackjack program that also is aimed at testing out the viability of small LEO satellite constellations for replicating or replacing large, expensive satellites in Geosynchronous (GEO) or other orbits for a variety of DoD missions.

“The two programs are complementary, though not directly linked. The R3D2 concept, which demonstrates a smaller, faster to launch and cheaper capability, could provide increased communication coverage typically covered by geo-communications satellites. Additionally, this capability could enable communications to disadvantaged users on the ground without requiring the use of a larger transmitter,” the agency said in an email.