Posted by Theresa Hitchens on September 9, 2019 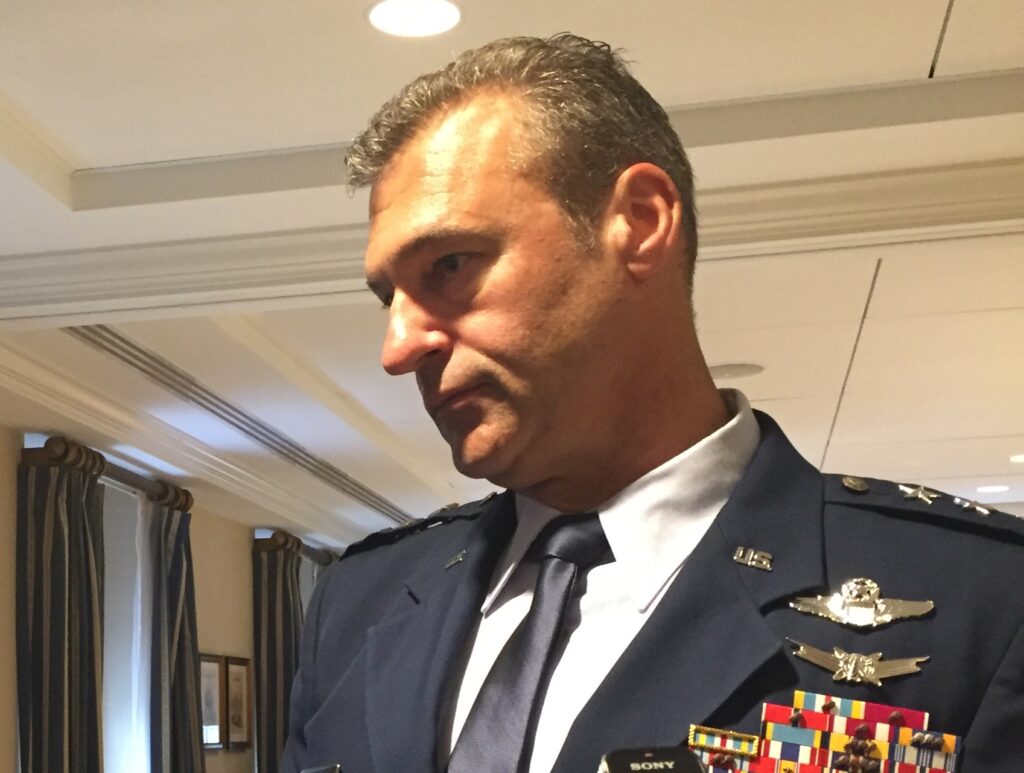 WASHINGTON: Deterring adversaries in space, and just as critically, enabling seamless integration with allies will require US policy makers and military leaders to make “tough decisions” about what can be made public about US and adversary capabilities, says the three-star head of Air Force Central Command (AFCENT).

“That involves where some stuff that is behind the green door is going to have to come out, and those are some tough decisions that senior leaders are going to have to make — because the risks of not doing it may outweigh the technical concerns of doing it,” Lt. Gen. Joseph Guastella told the Mitchell Institute Sept. 6. (We are not quite certain what green door the general meant to reference. “Behind the Green Door” is a famous film of a certain type from the 1970s that won mainstream critical acclaim. An older reference is to a 1956 song, titled “the Green Door.”  There’s also the 1921 Green Door Tavern in Chicago, for those lucky enough to have been there. It’s a former speakeasy, so we know what was behind that door.)

Guastella explained that for deterrence to be credible, adversaries “have to know that you have something, and you have to demonstrate a willingness to use it.” He added, “clearly we have to think how we are going to do this. At some point, we have to reveal some things — not everything, but some things.”

The Defense Intelligence Agency released a public report on threats to US assets in space for the first time, apparently an attempt at transparency. However, as far as we know, nothing was declassified in that report to better inform the American public. However, for many in the military space community (as well as commercial space operators), declassification — even when satellite safety is at stake — has not gone nearly far enough. Part of the problem is that the Intelligence Community is intimately tied to decision making about space policy via its development and operation of US spy satellites. Of course the IC, by and large, has a very different view on how far declassification should go (i.e., the less in the public domain the better.)

The space industry too has raised the issue of needing to both be informed about potential adversary threats, as well as how the US government intends to address them. For example, this was one of the reasons the Aerospace Industries Association (AIA) was supportive of the Center for Strategic and International Studies (CSIS) “Space Threat Assessment” study released in April that looked at open source information about the counterspace capabilities of potential adversaries, said Mike French, AIA vice president for Space Systems.  “We’ll play a role in ensuring that we have an unclassified version of this dialogue,” he added.

Guastella noted that there are models for how to declassify capabilities in the air domain. “We have fancy stuff that we reveal over time. The other domains have to. The same thing will happen in space … but the thinking has to happen now —  and it is, it is — about things we have to reveal and things we would never reveal until its absolutely needed [in a combat situation.]

Part of deterrence, he explained, is being able “to call them out” when an adversary takes threatening military action against the US or its allies. “Attribution has kind of become the new deterrence,” he said.

Another set of strategic decisions will be required to figure out where protection of space assets comes in the priority list during combat as part of operational planning, Guastella said.

“The value of a terrestrial target, or a maritime target or shooting down an airplane has to be weighed against the value of denying an adversary space capability,” he said. “And I would argue that the stock is going up for the space target list. It’s going up quick.”

The actual type of offensive action to take out a peer adversary’s space capabilities could range from “an orbit effect” to a “surface to orbit effect” to a “terrestrial hit” or a “non-kinetic” attack, he said, noting that he personally would prefer. “This thinking is there now, and it has to continue.”

Figuring out operational concepts for how and when to exercise space power in a conflict is another challenge that Space Command must tackle, Guastella added. “Right now space is a supporting element to a geographic [component command] … but that paradigm is going to flip over time, where the supported command — the primacy, where the actions will happen first — is going to be space,” he said. “Signaling and messaging from in space to a peer adversary can happen very very quickly — to the point where some of the initial shots, the initial deterrence, the initial messaging for a future fight will happen in space.”