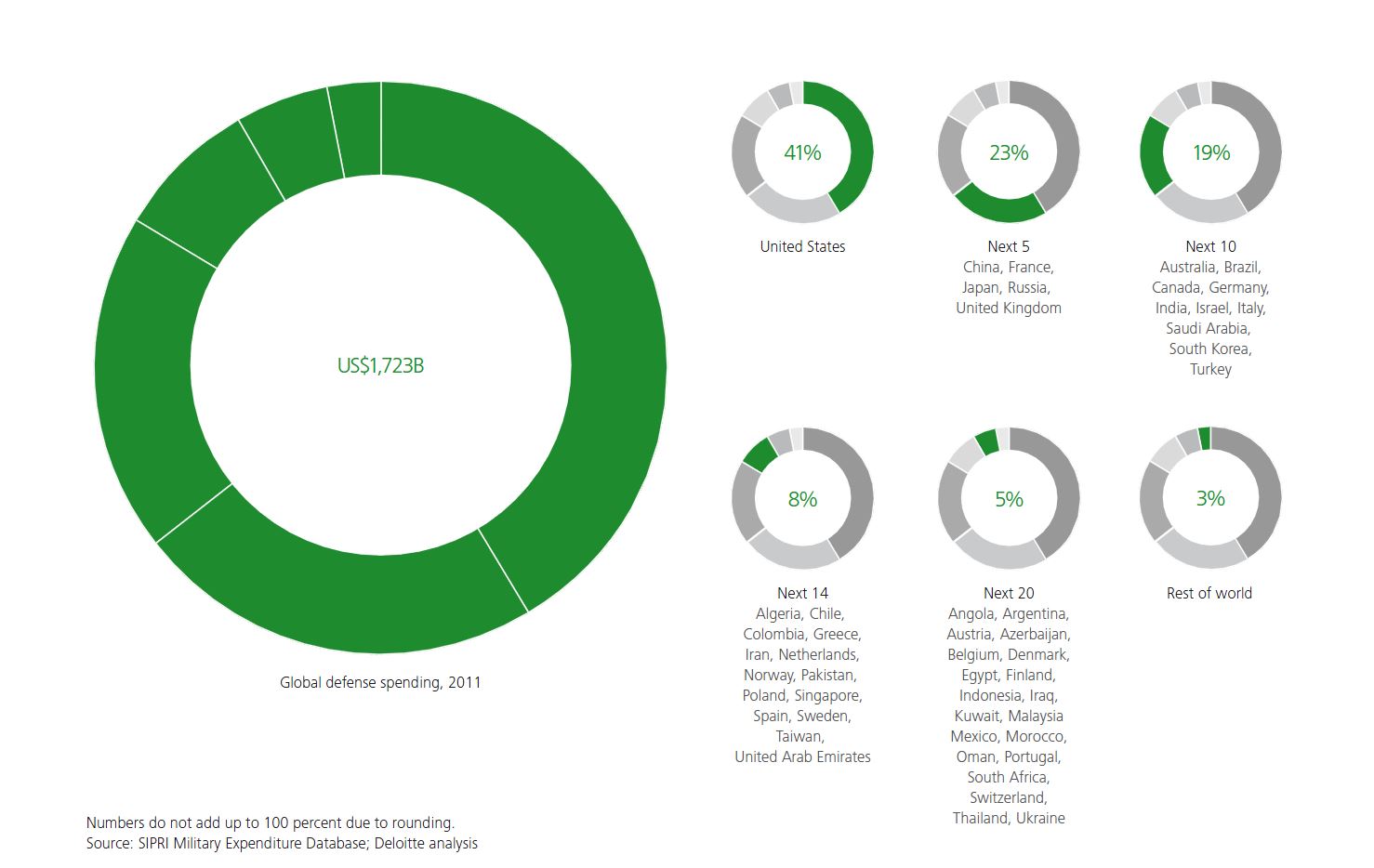 Deloitte LLP’s 2013 “Global Defense Outlook,” released today, is basically all bad news. Even the silver linings turned to lead when we talked them over this morning with the chief of the defense practice at the giant consulting firm, retired Air Force Gen. Charles Wald.

As US defense spending staggers, there are some other places on the planet where military budgets are on the rise, from the usual suspects in East Asia and the Persian Gulf to unexpected players in Africa. The amounts, however, aren’t anywhere near big enough to offset US and European declines.

Defense ministries and contractors have gotten used to powerful growth since 9/11. Indeed, the Stockholm International Peace Research Institute calculates the boom began even before that, with worldwide military expenditure rising every year since 1998 – until 2012, when they finally started down again. Of the (roughly) 195 countries in the world, just 50 account for 97 percent of global defense spending, the Deloitte study calculates, and, said Wald, that “top 50,” taken as a group, “are going to reduce their spending.”

That may or may not be good news for global peace, but it’s tough news for the defense industry.

It’s not just that the pie is getting smaller: Traditional defense firms’ percentage slice of that pie is shrinking as well. That’s because what little growth is happening is increasingly moving away from old-fashioned heavy metal – tanks, ships, planes – to information technology, from sensors to communications to cybersecurity. An invasion of IT companies from the much larger and more dynamic civilian economy hardly bodes well for traditional defense firms.

“The firms that work the cyber side of this have not necessarily been associated with the defense industry in the past,” Wald said. “Prescient firms on the civilian side, if they really have their stuff together, can make a profit and do well.”

High-tech opportunities are expanding even in areas most people might think of as backward and undeveloped countries. Even Taliban guerrillas often sport satellite phones and night vision gear, after all, while the Hezbollah militia in Lebanon boasts anti-tank and anti-ship guided missiles. So while Deloitte’s report focused on the world’s top 50 spenders on defense, Wald said, nation-states outside the top 50, such as Nigeria and Mali are spending more on security – albeit still peanuts from a US perspective – as insurgent and terrorist threats multiply.

But “their type of investment is not necessarily going to be tanks and things like that,” Wald went on. Like the rest of the world, he said, “it’s special ops, it’s more individual [equipment], it’s high tech, but not necessarily big equipment.” In the Cold War, US, Chinese, and, above all, Soviet aid kept Third World proxies awash in conventional weaponry like surface-to-air missiles and main battle tanks. Today even underdeveloped nations need to focus their investments on special forces, communications systems, and intelligence, surveillance, and reconnaissance, or ISR.

Even cyber isn’t just a First World buzzword anymore. “The African continent has skipped… from no telephones to wi-fi,” observed Wald, who oversaw US operations in Africa as the deputy chief of European Command from 2002 to 2006. In 2005, when he visited the Malian city of Timbuktu, proverbial for bits remoteness, “they had an internet café downtown,” he recalled. “If you drive around Lagos [the capital of Nigeria], there are people out on the street continuously selling telephone cards… Everybody has a cell phone.”

New opportunities, unfortunately, come with new vulnerabilities. No one in Africa is investing heavily in cybersecurity today, Wald said, “but they’re going to have to if they’re going to become 21st century economic players.”

Cyber and special ops are elbowing aside traditional big-gun investments in the First World as well, of course. Even in what Wald considers the unlikely event of a major conventional war, he said, “if that were to happen the cyber side of that conflict is going to have a huge effect on the conventional systems.” (This intersection of cybersecurity, electronic warfare, and shooting war is at the heart of the Air Force and Navy concept of “AirSea Battle.”).

In the final analysis, it’s still the United States that drives global defense spending. “The United States skews everything because we’re so darn huge,” Ward said. Even with a full sequestration cut of $500 billion over a decade, $50 billion a year, Ward noted, “the United States will end up with probably $450 billion [a year] at a minimum.”

China is No. 2, with a bullet. The Chinese defense budget has grown at a rate comparable to its economy as a whole, Deloitte calculates – and their international assertiveness, even aggressiveness, has grown correspondingly as well – but Beijing is starting from such a low base that its spending is still only about 20 percent of Washington.

The crucial long-term difference is that the Chinese have plenty of room to grow, while the US may already be overextended. By my own calculations using data from SIPRI and the World Bank (see chart below), China accounts for just 8.5 percent of global defense spending but almost 14.7 percent of global GDP. (Of course, the United States boasts about 314,000,000 people versus the Chinese population of 1,344,000,000 so individual Americans are much richer.) The US, by contrast, accounts for less than 20 percent of global GDP but over 40 percent of global defense spending. So, even allowing for huge hidden expenses on defense in China’s notoriously opaque budgeting, the People’s Republic spends a much smaller share of its wealth on its military. Indeed, as is often said, the US spends as much on its military as the next 15 countries put together. Even with all the inefficiency created by politics and the procurement system – all compounded by sequestration – that massive investment still buys us a lot of global power. Even Chinese officials have expressed appreciation for some of America’s global efforts, such as guaranteeing freedom of the seas. The question is, how long can we keep paying the bill. 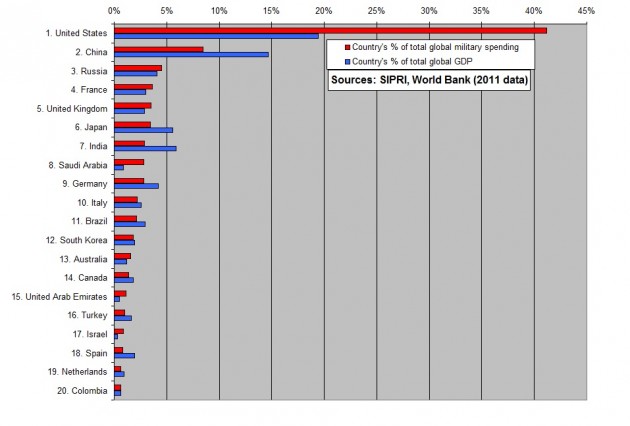