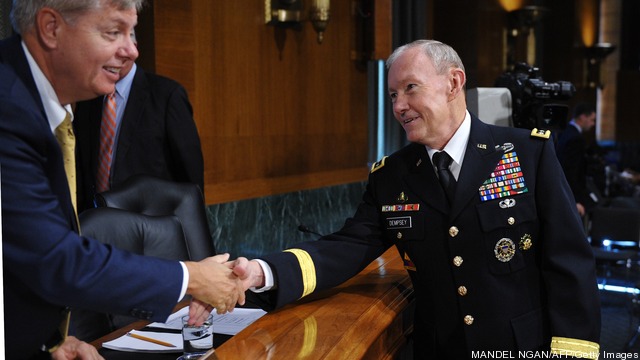 WASHINGTON: The nation’s top military officer today insisted he did not oppose the expensive and controversial F-35, on which three of the four services he leads depend on for their future air capabilities.

Asked about his recent congressional testimony that the nation “might not be able to afford” the three F-35 variants, Army Gen. Martin Dempsey said: “I didn’t have a cross hair on the F-35. I would have said the same thing about the ground combat vehicle,” he said, referring to the Army’s top procurement priority. The chairman clearly wanted to clear the air.

Dempsey, chairman of the joint chiefs of staff, said his response was in the context of a prior question about the impact of the additional $600 billion in defense budget cuts that would happen if failure of the congressional “super committee” forces sequester of $1.2 trillion in spending.

“I want everyone to know this will affect everything.”

Dempsey argued against congressional proposals to exclude military personnel funding from the reductions required by the $450 billion in budget cuts mandated by the new Budget Control Act. Addressing a conference held by the Military Reporters and Editors in Rosslyn he noted that the service chiefs had three areas they could adjust, If personnel costs were excluded that would force deeper cuts in modernization and in operations, maintenance and training.

If the chiefs have the ability to manage all three, “modernization will be affected,” but if they have five years or more to make the adjustments it can be done, he said. Despite the pending budget cuts, Dempsey also argued against what has seemed to be a growing isolationism in Congress and the public.


“We still are going to be a global power,” he said. Although there may be some commitments around the world that the military will not be able to do with less funding, it must be able to give the president the option of responding to international conflicts or humanitarian assistance situations.

Dempsey said one of his key tasks as chairman is to shape the joint force for the world of 2020. He said that force would be doing less counter-insurgency than today, but must retain the ability to deal with a continuing threat from violent extremists. It also must be capable of countering nation-state threats such as Iran and North Korea, and the “rising powers,” which usually is a reference to China, India and Brazil.

Asked about the recent announcement that 2,500 Marines will be based in Australia, Dempsey said that was an example of a renewed focus on the Pacific.

“It’s not countering China,” he said. “It’s a fact of the demographic shift, the influence shift,” he said.