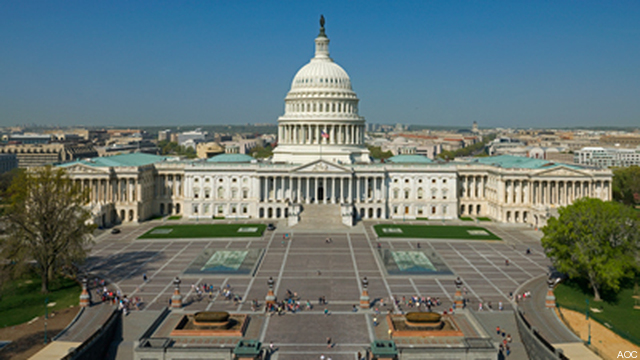 CAPITOL HILL: Congress and the Obama administration should thank their lucky stars that hardly anyone watched this morning’s House Armed Services Committee hearing about sequestration.

“This morning’s House Armed Services Committee hearing on the impact of sequestration on the Defense Department was yet another embarrassing political exercise,” say the folks at Taxpayers for Common Sense in a release. “It’s true the President could lead more rather than just pointing the finger at Congress and telling them to get it done, but Congress holds the purse strings, as they are fond of reminding us. They should use that power productively instead of staging yet another sideshow in the capitol’s three-ring circus.”

There are a few voices of reason out there. Sen. Lindsay Graham, a Republican, has called on his GOP colleagues to bite the bullet and find ways to raise some revenue lest the nation again look a laughingstock should sequestration happen. Graham said yesterday that Mitt Romney needs to come out and do something responsible about sequestration. He called on President Obama to call Sen. John McCain and see if they can work something out. And he told a small group of reporters that the GOP is at war with itself, with Tea Party adherents refusing to allow revenue increases and arguing that deep defense cuts may be needed. Graham, calling himself a Reagan Republican, distanced himself from Sen. Ron Paul and others in the House who subscribe to such views.

Deputy Defense Secretary Ash Carter played his cards at today’s hearing with great skill, expressing sympathy with defense industry leaders who face increasing uncertainty because of the government’s paralysis. Almost none of those reasonable voices were to be found at today’s hearing. Carter repeated the usual warnings we have heard from senior Pentagon leaders. Then he went further, saying troops heading to Afghanistan might not get the training they need.

“Some late-deploying units, including some deploying to Afghanistan, could receive less training, especially in the Army and Marine Corps. Under some circumstances, this reduced training could impact their ability to respond to a new contingency, should one occur,” Carter said.

Using two standards for readiness, Carter said Air Force flying hours might be cut “by several hours a month, and Navy steaming days could decline by several days a quarter.”

For industry, Carter detailed just what weapons systems would be hit by sequestration. In his prepared statement, Carter said sequestration would mean the Pentagon would have to cut four F-35s, one P-8, 12 Strykers, 300 medium and heavy tactical wheeled vehicles. The next generation aircraft carrier, CVN-78, and the Littoral Combat Ship would both be delayed.

While Carter was the rare reasonable man, most of what we got came straight out the school yard. Did!. Didn’t!! Did! Didn’t!! One rather unedifying exchange occurred between Reps. Mike Turner and Loretta Sanchez.

Democrat Sanchez asked Carter and fellow witness, Acting OMB Director Jeffrey Zeints whether the Obama administration got to cast a vote on the Budget Control Act, that pernicious legislation passed by both Republican and Democrats that requires automatic budget cuts, known as sequester, should Congress fail to pass a budget. They, of course, replied no. As Sanchez kept up the drumroll, Turner broke in — just maintaining parliamentary decorum — and asked whether the president had signed the law because it wouldn’t have become law unless the president signed it. Then he threw in the fact that he had noted against the BCA. NYAH!

A few minutes later, Zeints abandoned the magisterial isolation of his high office — few people in Washington are as respected or feared as is the head of the OMB — and went partisan. When some GOP lawmakers got into the whose fault is sequestration debate, Zeints sputtered, literally, that the real problem was that the “problem is Republicans have refused to accept that the top 2 percent have to pay their fair share.” And there you have it, America: policymaking at its most raw. NYAH!