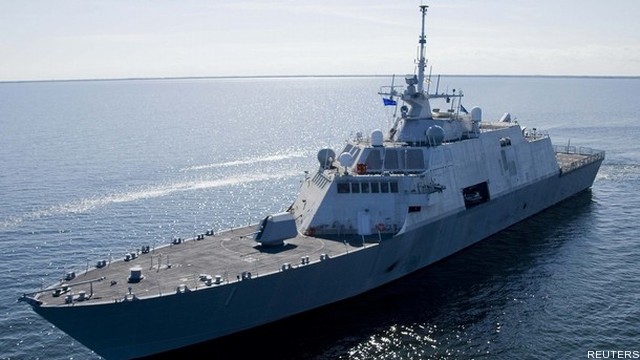 It was Fox who wrote the memo directing the Navy to slash its long-term LCS buy from 52 vessels to 32. So we’d love to know how strained the smiles were yesterday when Fox stepped aboard the first LCS, the Lockheed Martin-built USS Freedom,  which recently returned to San Diego from its malfunction-plagued maiden deployment to Singapore.

Whatever Fox saw and heard aboard the Freedom, it didn’t change her mind. This morning, at the AFCEA West conference in San Diego, Fox warned that the future fleet would face greater threats. “Niche platforms that can conduct a certain mission in a permissive environment have a valuable place in the Navy’s inventory,” she allowed in her remarks today, “[but] given more advanced anti-ship munitions being developed by potential adversaries, I believe it is an imperative to devote increasing focus and resources to the survivability of our battle fleet.”

Her natural conclusion, therefore, was, “we need more ships with the protection and firepower to survive against a more advanced military adversary.” Her prepared remarks didn’t mention LCS specifically, but they didn’t have to. LCS has long taken intense criticism for its limited firepower and, even more so, its fragility compared to larger and more expensive warships. The Pentagon’s head of Operational Test and Evaluation has said repeatedly the ship is not survivable.

Fox, of course,  is only the acting deputy Defense Secretary. In fact, Obama has formally nominated her replacement, his choice for permanent Deputy Secretary, former undersecretary of the Navy, Robert Work — one of the Littoral Combat Ships’ most vociferous defenders.

A Marine artilleryman turned military analyst, Work is articulate, combative and deeply committed to a high-tech vision of a future military reliant on a host of wirelessly networked unmanned and robotic systems. It so happens that the Littoral Combat Ship is the first navy vessel ever designed specifically to serve as a modular “mothership” to an array of unmanned aircraft, mini-subs, and so-called semi-submersibles that skim along barely breaking the surface. LCS is also the first ship designed specifically to operate as a node in a computerized command-and-control network. No wonder, then, that Work’s defense of the program never sounded pro forma. It fits too well with his idea of what the future military should be.

In fact, most of the LCS program’s problems came from trying to pack in too much innovation, too fast. Its lightweight hull had to be redesigned to handle heavier seas while the first two ships were already under construction, imposing major costs and delays. Its impressive 40-knot-plus speed, greater than any other warship, also imposed major expense and consumes a huge amount of hull space even though the Navy does not have a clear tactical concept of what that speed was needed for. Also, development of LCS’ high-tech, plug-and-play “mission modules” for sub-hunting, minesweeping and killing small attack boats has lagged behind construction of the ships themselves.

While the concept for LCS has evolved over the years, the Navy is touting its current incarnation as a low-cost alternative that can free up the bigger, tougher, and better armed destroyers for more dangerous missions. The ship’s ability to be in many places across the Pacific — simply because of its numbers — attracts senior officials eager to see American ships in Pacific ports, flying the flag, and along Pacific littoral waters, where war may well start.