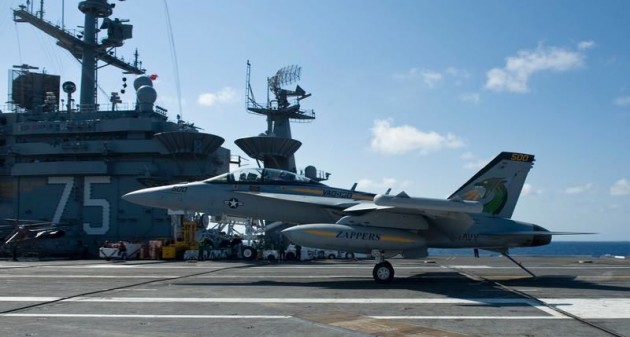 WASHINGTON: The second comprehensive report to Congress on the Pentagon’s aviation fleet paints a pretty robust picture of the fleet in most respects all the way out to 2043. But there’s a rub: like the Obama Administration’s budget request, the report doesn’t take sequestration into effect. (You can read the report below.)

One of the Pentagon report’s most important clients, the chairman of the House Armed Services seapower and projection forces subcommittee, Rep. Randy Forbes, offered a subdued view of the absence of sequestration cuts:

“Although this report fails to incorporate sequestration cuts, it does provide a comprehensive perspective on how the department believes it needs to prioritize its airpower investments over the next thirty years,” he tells us in an email.

But he raised questions about the strategic assumptions underpinning the study. The study does take into account last year’s strategy with its Pacific pivot.

“I wonder if the assumptions we have adopted to drive our thinking from the past two decades are the most appropriate to be influencing our planning for the coming three decades? Potential competitors now enjoy strategic depth, advanced integrated air defense systems (IADS), and precision guided weapons [more powerful than] what our airpower faced in Iraq or Bosnia in 1991, 1995, and 2003,” Forbes says.

Forbes raises questions that would resonate with the Marines and strategic elements of the Air Force: “Can we count on assured access to local airfields in future operational scenarios for our tactical land-based aircraft? Can we be certain that the Carrier Strike Group will be able to sail through contested waters in the Western Pacific or Northern Arabian Sea? To me, meeting this challenge requires a sustained investment in our long-range strike capabilities that will be placed in jeopardy if we continue to allow sequestration to wreck our procurement accounts.”

Because of that, he is closely watching the Navy’s handling of the Unmanned Carrier Launched Airborne Surveillance and Strike (UCLASS) program and what kind of mix of manned and unmanned aircraft the service decides on.

Fairly predictably, Forbes cautions against shutting down the F-18 fighter line, saying he thinks, “it would be premature for the Navy to allow the F-18E/F production line to shut down before we have full confidence that the F-35C is ready to move to full-rate production and we can confidently take the risk of having just one naval strike-fighter production line open.”

In terms of long range strike, the aviation plan notes that it does not allow for any planes being destroyed or permanently grounded and it continues to state the (deliberately) vague Air Force plan for 80 to 100 new Long Range Strike aircraft, with Initial Operating Capability (IOC) planned for the mid-2020s.