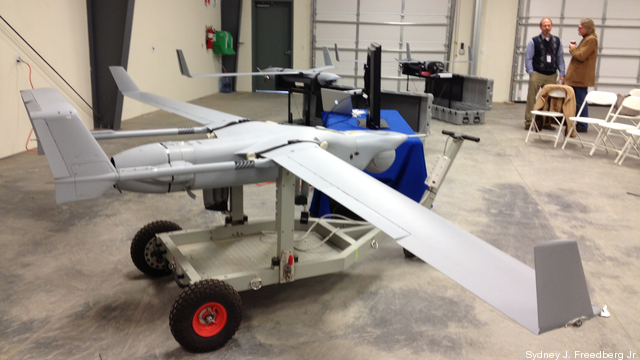 GILLIAM COUNTY, OREGON: This isolated test site in rural Oregon is where Boeing subsidiary Insitu takes its drones “to torture them,” said site manager Jerry McWithey. Temperates soar to 110 degrees in summer and plummet to 10 degrees — with 50-knot winds — in winter. The hot-and-cold ordeal the drones go through is a microcosm of the problems facing the company as a whole as the defense spending boom goes bust.

The era of exponential growth is over. When Insitu was founded back in 1998, it had just four people and a plan to build small numbers of small unmanned air vehicles for weather research. Shortly after 9/11, in February 2002, the start-up partnered with aerospace behemoth Boeing to develop military recon UAVs, and its ScanEagle drone (click here for video) first saw action over Fallujah in 2004.

Today, Insitu has 800 employees — 20,000% growth in 14 years — and “we are a wholly-owned independent — and the key word is independent — subsidiary” of Boeing, Insitu chief technology officer Charlie Guthrie told reporters here on Tuesday. Yet there’s still a scrappy West Coast start-up feel to Insitu, where ties are nowhere in sight and the drones are powered by engines derived from radio-controlled model airplanes: “I’ve got a weedeater at home with a bigger engine,” Guthrie told Breaking Defense. Mindful of what’s happened to other start-ups acquired by corporate giants, Guthrie said, “we were a bit worried about…being turned into Boeing,” but Insitu still keeps its own books, its own culture, and its own business model.

The problem is that business model, while innovative, now needs to change. Insitu makes its money not by selling drones to the military but by selling pixels: In most cases, its ScanEagle drones remain Insitu property operated by Insitu personnel, and what the Pentagon is paying for is reconnaissance imagery under a service contract.

The service model worked well for a decade because the Pentagon had much more money available than it had personnel or time. Buying contractor services bypassed the traditional, laborious process of acquiring a system, fielding it, and training military personnel to use and maintain it. The service model even let Insitu rapidly update the drones whenever it saw fit without going through the normal acquisition system.

The acquisition system is there for a reason, however, despite its dysfunctions. As budgets tighten and the pace of operations slows, the military wants to prune its hodgepodge of hastily acquired robots, standardize what remains, and replace contractors with regular military personnel.

Insitu is in better shape than many tech firms that have boomed since 9/11, both because it has Boeing to back it and because the military is already buying a version of its larger Integrator drone through the regular acquisition process, designating it as the RQ-21A. The company estimates that the RQ-21A program will be worth $500 million over 10 years. Nevertheless, while Insitu will build and help sustain the drones, it doesn’t take a degree in accounting to guess that being paid to make and sustain something brings in a lot less revenue than making it, sustaining it, and operating it.

Insitu declined to provide any revenue figures, but a spokesperson told Breaking Defense that “we have been able to sustain our service base while continuing to grow our acquisition customer base. This has offset fluctuation in the service market.” Looking forward, “we see a strong and growing demand,” the company said, and “we continue to work international and civil/commercial opportunities to expand.”

But selling drones to civilian agencies, the private sector, and foreign countries won’t make up for shrinking Pentagon budgets any time soon, despite the hopes of many UAV makers, because of unresolved problems with export control and airspace management.

Under export law, “all our products are considered weapon systems,” said Donald Shinnamon, an Insitu business developer. That means all foreign sales are tightly restricted under ITAR, the International Traffic in Arms Regulations. Oil companies interested in operating ScanEagle off their ships in the Arctic have been told that not a single non-US citizen may be aboard. Insitu is working to get a commercial version of ScanEagle classified as a commodity rather than a weapon, Shinnamon said, but when reporters pressed he didn’t offer any specifics of how the company was doing that.

Internationally, Insitu does have the advantage over other drone-makers that it’s been working with Australian government agencies since the nineties. “In Australia, we’ve done mammal monitoring [for environmental agencies], seals and walruses and I think some whales,” Guthrie said. Overall, he said, “we are making real good progress in Australia with civil authority there in doing flight operations in Australian airspace — actually going faster than with the FAA in US national airspace.”

“All of us in the industry had hoped or maybe even expected that the regulatory environment would have advanced quicker than it has,” Guthrie went on. “That is still the limiting factor [on] civil and commercial business.” The Federal Aviation Administration is hastening to fulfill a congressional mandate to “integrate” unmanned aircraft into civilian airspace by 2015, and Insitu is working with the FAA on an experimental drone flight zone off the North Shore of Alaska. But the FAA has plenty of obstacles to overcome in time.

In the meantime, Insitu and drone-makers like it remain dependent on their military customers. “For all intents and purposes, there is no commercial market at the moment,” said Shinnamon. “It’s all conjecture.”

(Full disclosure: Boeing and Insitu paid for Sydney’s travel, accommodations, meals, and gave him a heavy block of Lucite bearing the Insitu logo, presumably intended as a paperweight).