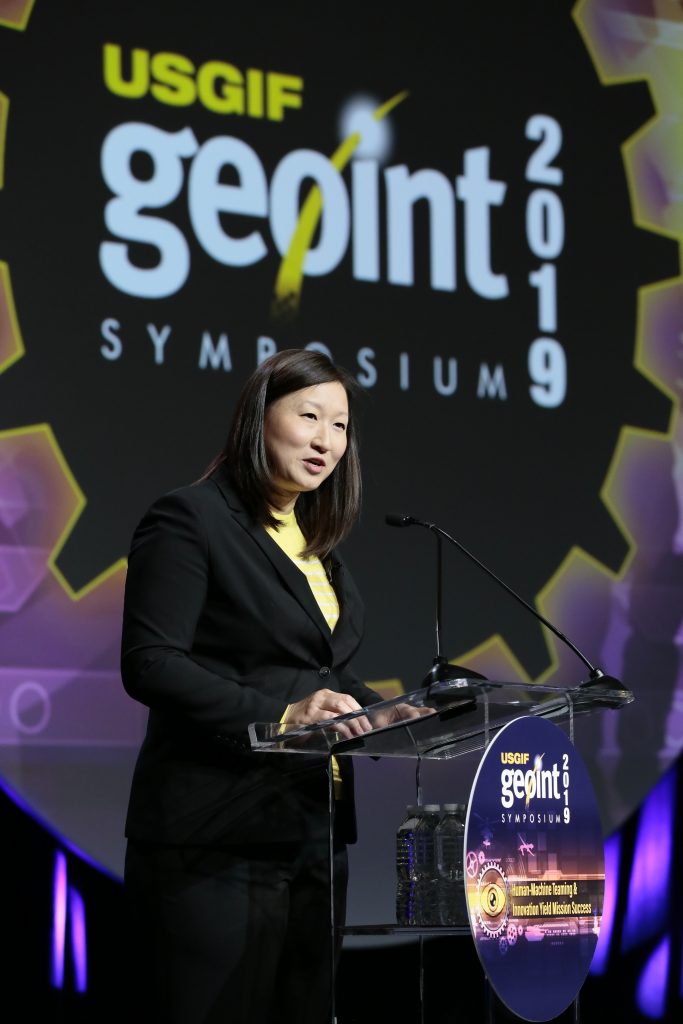 Deputy Undersecretary of Defense for Intelligence Kari Bingen at GEOINT 2019

GEOINT 2019: Intelligence data does not flow freely enough or move quickly enough among the services, and just as importantly to allies, says Kari Bingen, deputy undersecretary of Defense for intelligence.

Bingen told the conference here in San Antonio today that “within USDI we have prioritized the Distributed Common Ground System (DCGS) integration and data sharing. The DCGS family of systems is DoD’s flagship capability for providing daily processing, exploitation and production of analysis from DoD to ISR platform. Yet each service has developed stovepiped programs and architectures, linking to specific service airborne platforms and sensors, limiting our ability to provide commanders with joint intelligence products, and to more effectively utilize high demand assets.” (DCGS planning actually started waaaaay back in 1998, and it has gone through numerous iterations since both at the service and enterprise level. The Air Force, for example,  is now considering what must be done to make it more useful in for multi-domain operations.)

Asking for industry help, Bingen explained that DoD’s mission “is hampered when we have to pay in time and money analysts and experts to manually translate data files … to makes systems and data interoperable because of proprietary data standards and formats.”

Bingen also repeatedly stressed in her remarks the importance of being able to share data with allies and coalition partners. “We fight in coalitions. Our combined effectiveness depends on shared understanding of threats, shared intelligence,” she said. Therefore, she said, DoD needs “TPEDS systems that are not only interoperable across our own services, but with our allies and partners as well. And the data we collect and exploit must be releasable.”

Bingen cited DoD’s Project Maven, the Pentagon’s cornerstone Artificial Intelligence (AI) effort, as an example of success at moving quickly to address battlefield needs for automated data processing fueled by machine learning (ML) and AI. She said that “in under two years” the project has “made steady progress as pathfinder for AI and ML” in DoD, and that in under six months from the OK to do so in June 2017 it “delivered a real operational capability to the field.”

Maven was originally deployed to the Middle East and Africa, for use by troops in sorting through the vast quantities of intelligence, surveillance and reconnaissance (ISR) data including full motion video from UAVs. Since then, Bingen said, the project team has “significantly expanded the capabilities of the ML system, the number of geographic locations, the numbers of platforms and data and the intelligence mission areas beyond video.”

Because no discussion of intelligence and data can be had without mentioning security, Bingen noted the need for the GEOINT community to “collectively elevate our focus on security,” citing threats in particular from Chinese espionage. She reminded the audience of the Protecting Critical Technology Task Force set up last year by Patrick Shanahan, then-deputy DoD secretary, to integrate protection efforts across DoD. “We are working with (undersecretary of Defense for sustainment and acquisition) Ellen Lord and her acquisition sustainment team to make security a fourth pillar in acquisition alongside cost, schedule and performance.” She asked industry for its help in taking steps to protect themselves, including at the subcontractor supply chain level.

Asked about IC space asset integration with the DoD’s fledgling Space Development Agency’s planned future space architecture, Bingen said only that it is “early days.” However, she said she is “excited” about SDA’s plans and its focus on getting “capability up on orbit faster,” something DoD doesn’t “have the best track record” doing. “We’ve got to go faster, and we need to look at these more distributed, diverse and proliferated architectures.”

Noting the Senate Armed Services Committee hearing yesterday on the Trump Administration’s nominees for the directors of NRO and Space Command, Chris Scolese and Gen. John Raymond respectively, Bingen said the two leaders are in constant discussion. Not only about space system acquisition, she said, but more generally on “intelligence support to space operations and Space Command.” Bingen added: “There is a lot that the IC needs  to do to provide better intelligence support to space operations” She mentioned the need for IC support to: the J2 (the Joint Chiefs of Staff Intelligence Directorate), “foundational military intelligence and targeting,”  and to DoD’s efforts at “TPED-ing some of our space capabilities.”

Finally, Bingen cautioned that DoD and the GEOINT community about encouraging people to think AI is here today. She said they should not become too free in “tossing around” the term AI and making it sound easy. In fact, she said, DoD and IC efforts are really only now at the level of machine learning and automated data processing. “AI is hard,” she concluded.