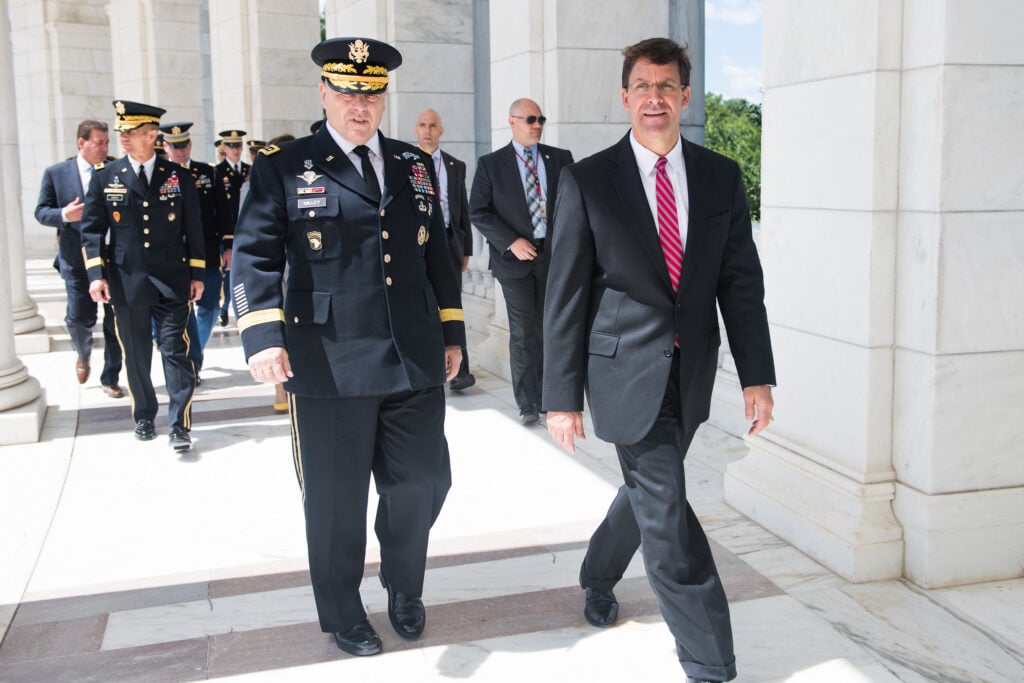 Esper and nominee to be Chairman of the Joint Chiefs at Arlington National Cemetery.

THE PENTAGON: The Senate confirmed Mark Esper to be the nation’s new Defense Secretary in a 90-8 vote today, to be followed by an official swearing in this evening at the White House, giving the building it’s first confirmed Defense Secretary since former secretary Jim Mattis left in protest in December.

Esper’s official ascension from Army Secretary to Defense Secretary comes one day after Congress and the White House agreed on a massive two-year spending bill that finally kills the sequester spending caps, while giving the military something it has long begged for: budget certainty.

But that certainty comes at some cost.

The deal, which funds the Pentagon at $738 billion in fiscal 2020, falls short of the $750 billion the White House and Republicans have maintained the Pentagon needs to keep its modernization push moving forward, and slightly above the $733 billion House Democrats passed earlier this month in their version of the defense spending package.

While the new 2020 budget figure represents a 3 percent increase from the 2019 budget, that’s on the low end of the 3- to 5-percent real growth Esper and Chairman of the Joint Chiefs Gen. Joseph Dunford have said the Pentagon needs to keep its modernization efforts chugging forward. The real problems surface in the deal’s second year, when Pentagon funding inches up to $740 billion which — given inflation — would mean no real increase in spending.

Budget analyst Byron Callan of Capital Alpha Partners wrote in a note to investors this morning that “the optics for FY21 are less attractive and may suggest no growth in investment from FY20 in current dollars and a real decline in constant dollars.”

Without real growth in the Pentagon’s budget, “you’re losing buying power” overall, said Rick Berger, a former Senate staffer now at the American Enterprise Institute. “If you don’t have real growth, you need to make real choices in what you’re going to fund.”

And Esper will have his work cut out for him managing a president who regularly surprises his military leaders and diplomats with statements and tweets that catch officials flatfooted.

For example, Trump said yesterday he could win the war in Afghanistan in a week but did not want to kill 10 million people to do it. “I could win that war in a week. I just don’t want to kill 10 million people,” Mr. Trump said. “If I wanted to win that war, Afghanistan would be wiped off the face of the earth. It would be gone in 10 days.” [Updated to include President Trump’s full quote and deletes reference to nuclear weapons.]

Internally, he is entering the SecDef’s office at the kickoff of a presidential and congressional campaign season, and working under two years of budget numbers he or his staff haven’t drafted.

“They’re going to have to get right into ‘21 and they’ll be working with a topline that isn’t theirs” Berger said. “It’s going to be even harder than usual, and the Pentagon has not done a good job in explaining to Congress where they want to go in terms of modernization.”

How Much Growth Is Real Growth?

In written answers submitted to the Senate Armed Services Committee earlier this month, Esper said the department “requires an average rate of 3-5% real growth” each year, while the momentum gained over the past two years under the previous budget deal “will be unnecessarily interrupted without continued funding growth.” The DoD needs to see consistent budgetary growth to meet the constantly changing challenges presented by Chinese and Russian military modernization, while keeping countries like Iran and North Korea in check.

As Army Secretary, Esper — the former top lobbyist for Raytheon — went out of his way to make some tough procurement choices, holding a series of deep-dive “Night Court” reviews alongside Army Chief of Staff Mark Milley that cut more than 100 programs and cancelled another 80. The cuts ended up touching a full third of the Army’s roughly 500 programs and freed up $25 billion over the next five years.

Esper and Milley — himself waiting to be confirmed by the Senate as next Chairman of the Joint Chiefs of Staff — will have vastly more expansive portfolios running the Pentagon than they did at the helm of the Army, along with a much more complex bureaucracy to manage. The differences in scale led several analysts to question whether a Night Court-style scenario could happen again.

“I think what Esper and Milley did in the Army with the Night Courts is potentially something that could be replicated across the rest of DoD,” said Todd Harrison of the Center for Strategic and International Studies. But given the entrenched rules, bureaucracies, constituencies, and decades-old planning processes that exist in the building, it “would be difficult to make a change like this. It’s not impossible, but it would require a concerted and consistent effort on their part.”

Loren Thompson, a top defense consultant, was more skeptical that Esper could replicate some of the Night Court’s successes. “They can’t really do a Night Court type of operation because of the way the political cycles run,” he said, since new politicians or authorizers would likely sign off on a big restructuring of jobs-leaden defense contracts in an election year.

Instead, “Esper’s biggest task will be to protect the building’s equities,” as the Hill looks to squeeze as much as possible into two years of budgets where the topline has already been set. “Considering how late it is in Trump’s first term, it’s unusual that so many top officials are new to their job, so the idea that they would try to do something big is somewhat hard to imagine,” Thompson said.