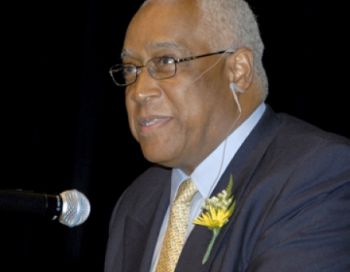 WASHINGTON: What does the former CEO of Ben & Jerry’s have to teach the US military? When it comes to reforming the Pentagon’s business practices, the answer may be plenty.

If you had to pick an ice cream company to partner with the Pentagon, you wouldn’t pick the notoriously (and sometimes literally) granola Ben & Jerry’s, whose motto is “Peace, Love, & Ice Cream” and whose corporate agenda includes lower military spending. When Robert Holland was trying for the CEO position in 1995, part of his application was a poem, in which the African-American businessman recounted being kept out of a segregated ice cream parlor as a boy. Holland got the job but kept it for only 20 months before he left over what one report called “philosophical differences with founder Ben Cohen.”

Holland spent most of his career in more conventional businesses, from Mobil Oil to Mckinsey & Co. where he gained a reputation as a “turnaround artist” who could rescue companies from their own dysfunction — something the Pentagon could use. Currently director of the Essex Lake Group, a consulting firm, Holland will now advise the Defense Department as a new member of the Defense Business Board.

Besides Holland, the eight new DBB members announced late last night include retired Marine general Arnold Punaro, whose fiery insights have often appeared in our pages. On paper, Punaro may seem an easier fit for the Defense Department than Holland: Punaro is a retired two-star Marine with a long history in the defense policy world.

But those who know Punaro know better. He’s a gleeful bomb-thrower with zero patience for Pentagon inefficiency and real eagerness for radical solutions. That includes a non-entirely-joking proposal to make a pile of every procurement regulation and “put a match to it.”

Also joining the Defense Business Board, which is an influential but part-time advisory gig, are

– “Dr. William Swanson, chairman of the Massachusetts Competitive Partnership and former CEO of the Raytheon Corporation”;