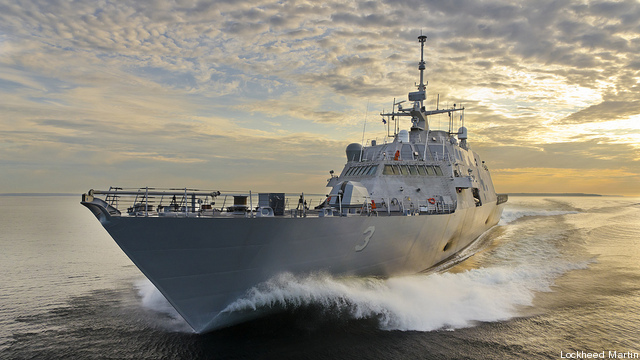 PENTAGON: There are a lot of questions about the Navy’s new Littoral Combat Ships, high-tech vessels that are smaller, faster, more flexible, and more vulnerable to damage than traditional frigates or destroyers.

In an exclusive interview with Breaking Defense, the Navy’s top surface-warships expert frankly acknowledged that they’re still working on the answers. Everything from concepts of operation to damage control to the ships’ top speed is still potentially open to revision, Rear Adm. Thomas Rowden said Friday in his Pentagon office. That attitude is refreshing, exciting, and a bit unnerving when you consider that the Navy wants to buy 55 Littoral Combat Ships, requesting $1.8 billion for four in fiscal 2013 alone.

“We have traditional roles for destroyers, cruisers, frigates,” said Rowden, who heads Navy staff section N96, “Surface Warfare,” which oversees those ship types for the Chief of Naval Operations. But the LCS is a radically different class of ship. The two now in the fleet — LCS-1 Freedom, built by Lockheed Martin, and LCS-2 Independence, by General Dynamics — were in fact bought with research and development funding outside the normal procurement process. (A third ship that just finished its acceptance trials, Lockheed’s LCS-3 Fort Worth, was procured under the standard shipbuilding account, and so will all LCSs to come.) Many saw the use of R&D funds as a mere budgetary expedient, but Rowden argues it genuinely reflects just how new and different the Littoral Combat Ships really are.

“Given the fact that we don’t have a lot of history to inform us on how we’re going to go utilize these ships, we are using these for research and development,” Rowden emphasized. “We are learning a lot….There’ve been significant changes between LCS-1 and LCS-3,” for example, including a longer, more stable hull and fixes for the cracks and leaks discovered on LCS-1 last year, the topic of a high profile, highly critical report by the independent Project On Government Oversight.

Nor do the changes necessarily stop there. Another criticism of LCS is that the design’s extraordinary top speed of 40 knots — more than 30% faster than current frigates and destroyers — is simply not worth the expense of building the ship with two sets of engines: diesels for fuel-efficient cruising and gas turbines that kick in for a high-speed dash. “Speed is life and more is better,” Rowden said, quoting a Navy aphorism. No less a naval hero than John Paul Jones famously declared that, “I wish to have no connection with any ship that does not sail fast for I intend to go in harm’s way.” Nevertheless, Rowden said, “as we go forward with our R&D platforms and do some research and do some development, I think the need for speed will either show itself or, if it doesn’t, then perhaps we’ll go in a different direction.”

The major criticism of the Littoral Combat Ship is that it just isn’t tough enough to take a hit in battle and keep going. On the Navy’s own scale, the Arleigh Burke-class destroyer is rated survivability level 3, the Perry-class frigate is level 2, and the Littoral Combat Ship is level 1, the same as the Avenger-class minesweeper and other support ships. LCS has more self-defense systems than the minesweepers, and it is has more speed than the frigates and destroyers, but in an era of supersonic cruise missiles and fast attack boats, that may not be enough to keep from being hit. Once hit, moreover, the LCS has a much smaller crew than traditional ships — about 80 sailors compared to over 200 on the similar-sized Perry. Doesn’t that make it a lot harder to do damage control? “That’s what we’re going to go find out,” Rowden said, smiling.

What Rowden does know for sure, he said, is the value of Littoral Combat Ships in the “presence” missions — counter-piracy patrols, port visits, exercises with foreign partners — that make up most of the Navy’s operations day to day. Harking back to his time commanding a mixed force of frigates, destroyers, and other vessels in the Mediterranean and the west coast of Africa, Rowden said, “I would have preferred to have LCS over probably most if not all of the other ships that I had.”

“Typically we take very, very expensive, very, very high-end DDGs [Aegis destroyers] to execute the anti-piracy mission off the Horn of Africa,” Rowden went on. “[That’s] using an eight-pound maul to whack a fly.” Likewise, when building partnerships with Third World navies, Rowden preferred to rely on the aging Perry frigates or even cutters on loan to the Navy from the Coast Guard. “If I were to bring a big, heavy ship in, most of these folks had never seen one of those,” he said: They simply had no idea how to apply such a naval juggernaut to their own modest missions of coastal defense, counter-piracy, and fisheries protection. In those roles, he said, “you can probably get more utility and certainly more alacrity out of a smaller, more agile ship.”

LCS’s suitability for presence missions doesn’t mean it’s unsuited for a major war, however. “The ships are built to go in harm’s way, okay?” Rowden argued. “But we need to be smart about how we drive them.” In wartime, the lightweight Littoral Combat Ships would be connected by computer datalinks to the main fleet. Skirmishing LCSs would hunt submarines, small attack boats, and mines that threatened the larger ships, while US carriers, Aegis ships, and attack subs protected the LCSs in return from enemy missiles and airstrikes.

Exactly how this works, however, is something the Navy is going to find out as it goes along. “There are innumerable fantastic qualities about the sailors serving in the United States Navy today,” Rowden said. “We put an asset, a ship like LCS, into their hands, and they are going to figure out how to get the most out of it.”

“It’s very easy to concentrate on what the ship isn’t,” Rowden summed up. “It’s much more difficult to look into the future and say, this is what it could be.”