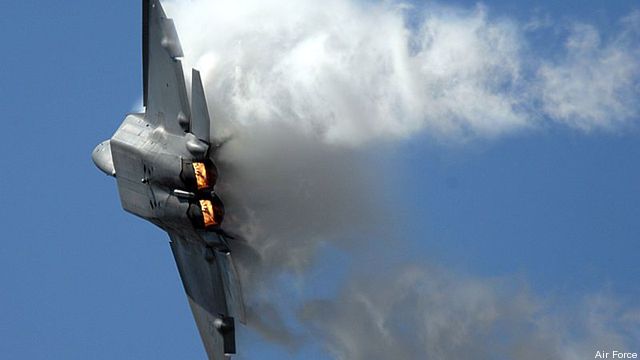 UPDATED: Official Confirmation F-22s Were Used. Flew From Regional Base.

WASHINGTON: While we don’t yet have much detail on how many were used, what munitions were used or what targets they hit, F-22s were used in last night’s air strikes in Syria against ISIL and al Qaeda.

F-22s flew in the second of three waves of attacks launched against ISIL targets in Syria,  Lt. Gen. William C. Mayville, the Joint Director of Operations, told reporters during a briefing on last night’s air strikes.

The F-22 Raptors were mostly present to protect other aircraft from both surface-to-air missiles and from the fighter jets of Syria and Iran, said Robbin Laird, a defense consultant here known for his in-depth knowledge of the F-22.

For the Air Force, this is a talismanic moment. The F-22 is widely considered the world’s ultimate fighter with its supercruise capability, stealth and superior maneuverability. But it has, until last night, not been used in combat operations, leading to mocking comments directed at the expensive aircraft, which former Defense Secretary Robert Gates capped at 187 planes. That drought has ended, and with good reason, say two of America’s most highly regarded experts on air warfare.

“Effective planning requires the use of the right force at the right place at the right time,” Dave Deptula, the man who ran the air war in Afghanistan, says in an email. “The F-22 is the world’s most advanced combat aircraft and has the ability to negate the effectiveness of threat air defense systems. That’s why it was used in this case. There was no ‘dry spell’; rather, the previous operations in the permissive airspace of Iraq and Afghanistan did not require their capabilities.”

Deptula was joined by Mark Gunzinger of the Center For Strategic and Budgetary Assessment in his assessment this was the right mission.

“They are the most capable operational fifth gen combat aircraft in the world. F-22s are exactly the kind of capability a combatant commander would ask for if precision strikes are needed on targets in areas where hostile air defenses are present,” he writes. “The alternative to using highly survivable stealth aircraft would be to first conduct a campaign to suppress those threats. Such an operation in Syria would have significant policy implications, of course.”

Syria owns and uses advanced Russian air defenses, though not their most advanced.