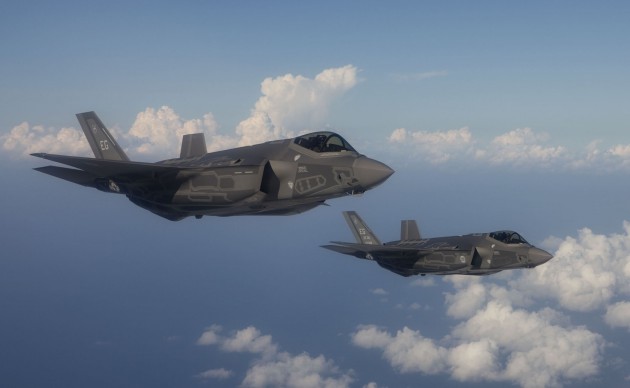 ARLINGTON:  “I don’t have the exact number yet,” Air Force Maj. Gen. Edward Bolton said Tuesday, but to pay the bill for sequestration, the service might have to cut its fiscal 2013 procurements by “two, three, four, maybe even five F-35s.”

“That money’s just gone,” sighed Bolton, the service’s outgoing deputy assistant secretary for budget, as he addressed a gathering of industry insiders and retired officers (often the same people) at the Arlington headquarters of the non-profit Air Force Association.

The prospective cut would bring the service’s 2013 purchase down from the 19 Joint Strike Fighters requested in the president’s budget to as few as 14.

But all is hanging. “I have final sequestration numbers; I don’t have final decisions on how they’re going to implement that in some of the acquisition programs,” he said.

This is just the leading edge of sequestration’s impact on Air Force investment programs – and on the delicate political balance between the active-duty force, the Air Force Reserve, and the Air National Guard.

The near-term impact of sequestration has been on training and maintenance, so “this year I’m talking mostly about impacts to operational readiness,” said Bolton, who’ll retire in less than 30 days. But a deeper, longer-term problem will confront his successor, Maj. Gen. (select) Jim Martin: “When he’s standing here next year, he’s going to be talking about modernization impacts,” Bolton said. “That becomes an industrial base issue.”

On paper, sequestration applies evenly to everything in the Pentagon budget except for military pay, which is exempt. But in practice it hits readiness and investment at different speeds. Training and maintenance are paid for as you go, but weapons programs have long lead times, so the government may not actually write a check to the contractor for a given item until a year or more after Congress appropriated the money. Those “unobligated balances” provided a cushion to protect procurement programs from feeling the impact of sequestration immediately. That cushion is now gone.

“That’s a trick you can’t do twice,” said Bolton. In 2013, “we’ve got over a billion dollars of unobligated prior year balances we were able to contribute [to paying down the sequester bill]. Next year, this year’s the prior year…Next year, it’s going to be more painful.”

“Are you all sufficiently depressed?” Bolton asked the audience with a bleak grin. “It’s a grim picture.”

The budget pressures will also force the Air Force to request reductions in the Air National Guard, something that provoked outrage last year before Congress came to a compromise that cut the Guard somewhat.

“To say it was not well received would be an understatement,” Bolton said. “In my entire 30 years as an officer, of the 10 to 15 most intense meetings I’ve ever been in, probably 12 or 13 of them were associated with this moment on the Hill.”

“Here’s a mistake that the Air Force made,” he went on: “The Air Force decided to address a very difficult issue… in a very short time period…. Our ability to do the field work that it takes to coordinate that on the Hill and down in the states… so it was politically untenable.”

But cutting the Guard and Air Force Reserve is something the service is going to have to tackle. It can’t just cut the active force: “The active duty has gone down at a much steeper rate in the past two decades,” Bolton argued. “It’s gotten out of whack.”

To try to forestall another firestorm, the service has appointed “three amigos” – a two-star general from each of the three components, active, reserve, and guard – to come up with a new proposal together. “hopefully everyone will abide by the results because they’ve participated,” he said.

I cornered the general after his remarks to make sure I’d heard him right about the F-35. Didn’t the Air Force already talk about losing five Joint Strike Fighters this fiscal year? Well, yes, but that five-plane reduction was already built into the 2013 budget request rolled out over a year ago.  “Now, as part of sequestration,” Bolton told me, “there’s going to be additional tails taken. I don’t know what the number is. Probably three, plus or minus two.”

The program of record remains at 1,763 of the Air Force’s F-35A variant of the Joint Strike Fighter, Bolton emphasized. The FY 2013 budget request shuffled more of those into the out years, took 98 out of the current Future Years Defense Program (FYDP) and five out of fiscal ’13, reducing that year’s planned purchase of 24 planes to 19. At least in theory, however, the Air Force will still buy all planned 1,763 planes by the same end date, it would just buy more in later years than originally planned.

That was the plan as of January 2012, when everyone thought the automatic budget cuts known as sequestration were so horrible that someone – someone else – would stop it. “I would have bet you anything that this would never happen,” Bolton told the audience at AFA. In fact, “initially, we were not permitted to do sequestration planning,” he said. (That was all part of the high-stakes brinksmanship between the White House and Republicans in Congress). When everyone finally admitted the sequester would happen after all, Bolton said, the order went out to Air Force budgeteers – and here he snapped his fingers – “find nine billion dollars.”

“We went to the F-35 program for a couple of reasons,” he said, but it boils down to what is sometimes called Sutton’s Law: “That’s where the money is.”

[For those who saw this story and then saw it vanish earlier tonight: we are still getting used to our new system and we posted it accidentally. Apologies. The Editor.]