ABOARD THE USS ABRAHAM LINCOLN: The Navy dragged its feet for years after committing to buy the F-35C for carrier operations.

They worried it would be too expensive to maintain. They worried the tailhook problems would persist. They worried it was too heavy. Let’s face it: the Navy leadership was just worried. After all, they had a fighter that works, the Super Hornet, already flying, thoroughly integrated into the complex and dangerous dance of the carrier air wing. Some were nearing the end of their operational life but the Navy committed to strengthening their wings and keeping them flying.

But on August 27, for the first time, F-35Cs launched, landed and maneuvered around the flight deck with F/A-18E/F Super Hornets, EA-18G Growlers (which jam enemy radar), E-2D Advanced Hawkeyes (radar/recon planes), and C-2A Greyhounds (cargo craft, being replaced by the the V-22) . I was lucky enough to be part of the small media group invited aboard. Operating alongside the rest of the air wing is a big step, dramatically more complex than when I’d visited the USS Nimitz in November 2014 and the F-35Cs flew and landed by themselves. 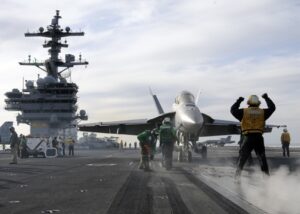 There really wasn’t much news made, aside from the routine nature of the takeoffs, landing and deck maneuvers. But the man in charge off integrating the F-35C into the Navy, Rear Adm. Dale Horan, did tell me that the Navy has been pleasantly surprised by their ability to maintain the Joint Strike Fighter’s stealth characteristics. While such maintenance remains complex, he told me, it’s very manageable and less onerous than some had feared.

Overall, the operational tests were meant to demonstrate how the F-35C “integrates with the ship, how it interoperates with communications, data links, other aircraft, and then how we conduct the mission and tie into the other aircraft that are conducting that mission and how effective they are when they do it.” The aircraft were performing simulated combat missions and performing as they would in combat conditions. If you watch the full video you’ll see how quickly and efficiently the various aircraft are maneuvering, taking off and being recovered.

This is an inherently high-risk business. As my colleague Ben Werner at USNI reported yesterday, one F-35C had suffered a Class A mishap on Aug. 22 during refueling from an F-18 Super Hornet. Class A means the plane suffered more than $2 million in damage or someone is badly injured or dies. The F-18 was also damaged. It was a Class C mishap, meaning the plane suffered less than $500,000 in damage. Everyone landed safely, USNI says.

Thank you to the crew of the Lincoln for putting up with this nosy reporter, feeding us well and keeping us safe. When we landed we got the thrill of heading straight from our COD flight up to the bow through several moving aircraft.

(Apologies to our readers for this late posting. My life got in the way.)