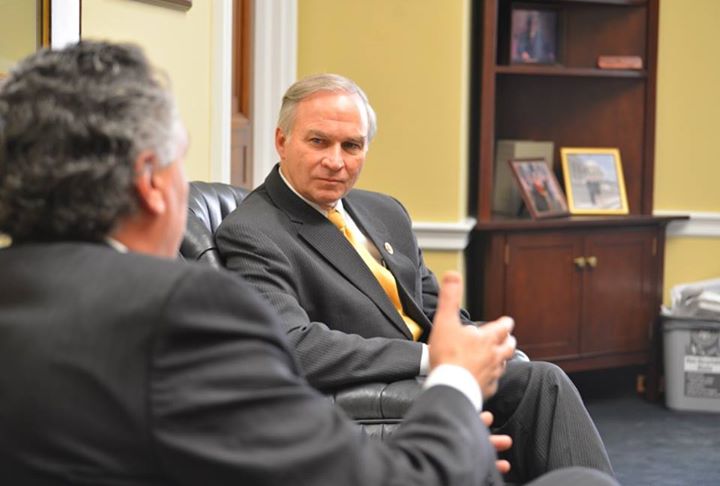 WASHINGTON: Rep. Randy Forbes will, for now, deny that he is positioning himself for the coming battle for chairman of the biggest committee in Congress, House Armed Services, fondly known as the HASC.

But Forbes, one of three committee members regularly mentioned as having a good shot at the job, is clearly beginning to position himself for the November or December meetings of the House leadership where the chairmanship will be decided. He may deny it, but it certainly looked like Forbes began his pitch Tuesday, calling for new congressional “leadership” on defense and national security issues.

“We are going to have to have a new future congressional leadership,” he declared at yesterday’s Credit Suisse defense conference organized by Jim McAleese. When I asked him if he was quietly declaring himself for the position of HASC chairman, he artfully stepped right (where else could he go?), declared the current chairman would agree with most of his policy points and took a few shots at Sen. Harry Reid, a Democrat any GOP member of the House can agree to dislike.

Pointing to the dysfunctional, gridlocked, almost useless state of Congress (my words, not his), he said: “We used to have people on the left who didn’t want to pay for defense. Now, I’ve got people on the right who don’t want to spend anything on defense.” To a vigorous defender of defense spending and America’s global presence that is not good. What really worried him wasn’t so much those policy positions as that “the debate doesn’t occur” any more over how much to spend, let alone what to spend it on.

He outlined what sounded like an ambitious attempt to generate new and better defense policy ideas, bringing in writers, think tank types and others to talk with members and staff. He discussed a series of defense roundtables at American universities similar to the conference recently held at the Reagan Presidential Library.

I spoke Wednesday afternoon with a Republican well versed in the process of selecting a committee chairman about just what the House leadership looks for in a chairman and asked him to handicap the race. As do most observers, he bet on Rep. Mac Thornberry, saying the “race is his to lose.” But he made clear that Forbes and Rep. Mike Turner, chair of the HASC tactical air and land forces subcommittee, have reasonable chances.

What will the leadership look for in a potential HASC chairman after the November elections?

When the GOP steering committee gathers, they will consider whether the contenders have  “done work on the policy side. Are you down on the [House] floor as a leading voice? Are you out in the press as a leading voice?” the source said. “Then they look to see if you are helping to elect Republicans to the House.” Finally, the leaders mull if you are a “team player,” someone likely to play to the tune of the House leadership.

Thornberry, who earlier tried and failed to win the HASC chairmanship, has, in the words of the GOP source. learned much from those earlier races. “He’s much more involved with the rank and file on policy side. Mac is raising a lot of money.” Also, Thornberry is “not afraid to take on the administration.”

So Thornberry’s status as firm front runner may well have sparked Forbes’ decision to up his game on defense policy and increase his public profile.

Most interesting to the race will be an element few of us will know about until after leadership makes a choice. “Leadership races are intensely personal decisions for members to make,” our source said. That element appeared to play a role in the selection of Rep. Buck McKeon, the current chairman, who surprised many observers when he was picked by the House GOP Steering Committee.