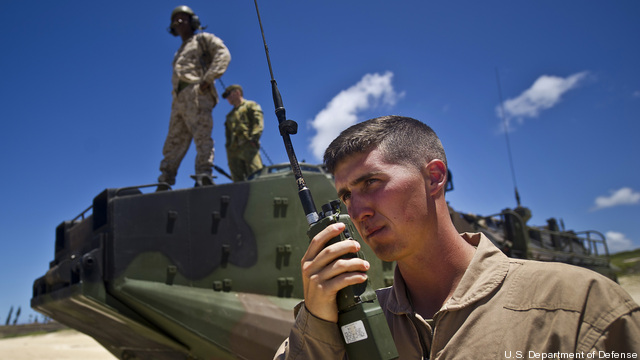 CAPITOL HILL: The commandant of the Marines told Congress today that his service could not handle even one major war if Congress doesn’t undo the $500 billion, 10-year cut to defense spending known as sequestration. The Navy, for its part, would have only one aircraft carrier ready to “surge” in a crisis instead of two or three, allowing it to reinforce only one war zone at a time.

A central tenet of American strategy has been the ability to fight and win two major wars in two theaters at the same time since World War II. How well the military could actually meet that requirement has been open for debate, but it was always upheld as the official ideal — until January 2012, when the Obama administration’s Defense Strategic Guidance downgraded the goal to, in essence, win one, hold one.

But the Marines Corps would be stretched even to meet this more modest goal, and sequestration would call conducting even a single “major contingency operation” into question, Commandant Gen. James Amos told the House Armed Services Committee today.

“The Marine Corps today sits at 27 infantry battalions; we’re on our way down to 23 as a result of the Budget Control Act,” which reduces the Marine to 182,100 personnel, Gen. Amos told the House Armed Services Committee this morning. A “notional” major war would require about 19. “There’s not really a large amount of slack,” he said. “We are a single-MCO Marine Corps.”

However, “bring in sequestration and we’ll be down in the teens for battalions, and we will be very, very strained to be a one-MCO Marine Corps,” Amos said.

How the military arrived at these numerical requirements is classified, and the exact numbers are open to debate. But they’re a red flag for Republicans like HASC Chairman Buck McKeon, who had already opened the hearing with a denunciation of the Obama Administration for abandoning “the strategy we’ve basically had since World War II” of standing ready to fight wars in two major theaters at once.”

“Sadly, it’s not surprising,” said one of the GOP’s favorite thinktankers, American Enterprise Institute analyst McKenzie Eaglen, a member of Breaking Defense’s Board of Contributors. “Last year… the President directed the military to scale back long-standing war plans.”

“This is one of the reasons the Pentagon should have detailed the negative consequences of full sequestration in its 2014 budget request,” Eaglen told me in an email. “Congress lacks full awareness of the implications of its own votes across the military under sequestration.”

One Democratic staffer, however, argued that Gen. Amos was just acknowledging what’s long been the reality: “Iraq and then Afghanistan consumed almost the entire Marine Corps, so we’ve always had a ‘one war’ USMC in terms of large-scale conflicts.”

“Typically, you have a carrier in the [Persian] Gulf, sometimes two” — two had been the standard until February — “[and] one in the Western Pacific,” Adm. Greenert explained. Then there are carriers back in the United States but ready to sail to war in anywhere from a week to a month, the “surge” capability, he went on. Historically, Greenert said, the Navy has had two or three carriers and their escorts ready to surge at any given time, but keeping so many ships, aircraft, and sailors fully maintained, trained, and ready to go costs money that the Navy no longer has. So, said Greenert, “we’ll have one instead of two or three.”

How long will that 50-plus-percent shortfall in surge capacity last, I asked? Until the middle of next year, Greenert replied.

The Marines have their near-term readiness problems as well. “We are eating our seed corn right now,” said Gen. Amos. To keep Afghanistan-bound units fully manned, trained, supplied, and equipped, the Marines are stripping readiness funds from the rest of the force. While an infantry battalion or aircraft squadron preparing for an Afghan deployment will be funded at 100 percent of need, he said, “if you went to their sister units across the base, they’d be 30 percent down.”

“As we move into the early parts of ’14,” said Amos, units not committed to Afghanistan “will be at a readiness rating of C-3 or below,” on a scale from C-1 (fully ready for “wartime missions”) to C-5 (totally unprepared — a rating almost never given). Units rated below C-2 are normally not sent abroad at all. So if there’s a crisis anywhere but Afghanistan, the Marines will have to “cobble together” ad hoc forces as they did for the first days of the Korean War in 1950 — a particularly painful analogy given the current tensions with Pyongyang.

“If the balloon goes up, we will go, and we will turn in a good performance, but it will be painful,” Amos said.

The spending bill finally passed in March has made the military’s immediate readiness problem more manageable, Greenert told reporters, and the Navy now is preparing detailed plans on how to spend that money in hopes of getting the Pentagon Comptroller’s full approval by the end of the month. Even so, last month’s Continuing Resolution, H.R. 933, only deals with slightly more than half of an estimated $8.6 billion shortfall in Navy operations and maintenance accounts, leaving readiness funds still $4.1 billion short, or about 10 percent below what service had planned for 2013.

So while the Navy won’t have to cancel any of the major ship overhauls known as “maintenance availabilities,” it will reduce the scope of work done on two ships and must defer maintenance on 84 aircraft — maintenance deferred into 2014, when the budget is already looking tight. All told, the Navy estimates it will have $9 billion worth of unmet 2013 needs to make up for in 2014, said Greenert. If sequestration continues in full force, he went on, that shortfall would rise to $23 billion.

The sea services will struggle to protect their top priorities, Greenert and Amos both said, such as support for wounded warriors and victims of sexual assault. But the price, Amos added, would be reduced readiness for combat.