Gen. Davis Hopes To Keep F-35B Out Of War Zones Right After IOC 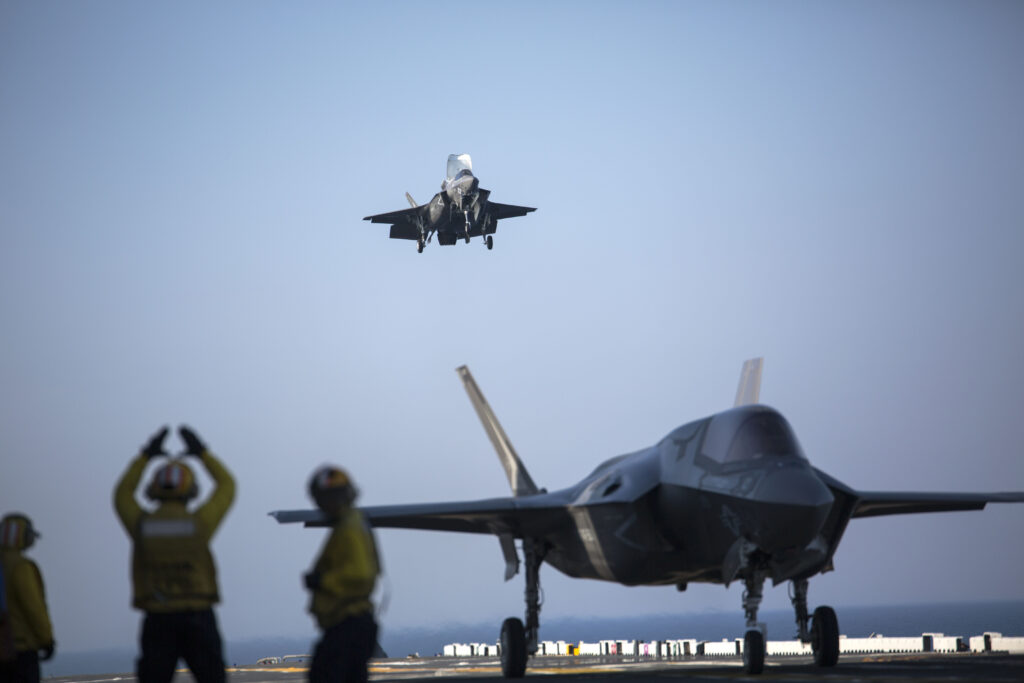 F-35B lands on the USS Wasp as it arrives for the first phase of Operational Testing on May 18, 2015.

WASHINGTON: As the Marines started doing operational testing of the F-35B aboard the USS Wasp, the head of Marine Aviation is visibly and demonstrably confident the aircraft will meet the date for the plane’s Initial Operational Capabiility.

“To me the F-35 program is right on track where it should be,” Lt. Gen. Jon Davis, the head of Marine aviation, told reporters this morning. But, while the plane would be ready to go, he’d like to forego the usual Marine practice of sending a new weapon into harm’s way as soon as it’s available. “If I had my druthers, I’d rather not deploy it right away, because I’d like to build some momentum in the program and build the instructor base,” Davis told us at a Defense Writers Group breakfast.

Davis made it clear he has no reservations about the plane going into combat. He just wants a chance to ensure there are enough trainers and maintainers to keep the fleet flying. To illustrate how important maintenance and readiness are to deploying the F-35Bs, Davis said after breakfast that Marines are flying an engine module out aboard a V-22 to demonstrate it can done as part of the tests aboard the Wasp. One of what had looked like the biggest obstacles to IOC, the ALIS system used to track and assist maintenance, is working well enough, Davis said. He said F-35Bs were being turned around in about two hours, which he told me after breakfast is about 15 minutes longer than for F-18s.

While the Marine version of the Joint Strike Fighter may hit the summer IOC goal (sometime between July and December) the service faces challenges keeping the rest of its fleet in the air. He didn’t say it, but it seemed pretty clear that Davis worries he may face the same problems with the F-35 as he’s having with the rest of the Marine aviation fleet.

Some 158 of the airplanes — 19 percent — that the Marines fly are not ready for prime time at any given time right now. “It’s way too high. It’s way too high,” Davis said. After several visits to Capitol Hill and a great deal of analysis, he said, “we have a way to get those numbers back.” It will cost $320 million to get those 158 aircraft back, he said. Here’s a rough breakdown for the 158 aircraft: most are CH-53E helicopters; 20 F-18s; 22 Harriers; and the rest are V-22s and H-1s.

A study done on the Harrier fleet concluded he could get them back in the air within 18 months. He’ll have a study in his hands on how to restore acceptable readiness rates for the CH-53E on 8 June. Davis told us he thinks he can restore readiness for 30 to 40 aircraft each year.

Davis identified prop blades, variable frequency generators and IR suppressors as prime causes of much of the V-22’s degraded readiness. He wants his ship-board crews trained so they can repair prop blades. Today, that work gets done ashore.

Meanwhile, Davis said he told Marine Corps Commandant Gen. Joseph Dunford yesterday that he “didn’t see the need to curtail” or amend V-22 flights after the recent crash in Hawaii. The causes of that crash is not yet known and investigations are underway,

Davis said the new armor kits for the V-22s — which Air Force Special Operations Command asked Navai Air to commission — are promising. “I think we should look at that very closely,” he said, noting that he got briefed on the kits just the other day. Of course, the armor adds 800 pounds of weight which reduces range. So the Marines will be looking at this carefully.

Here’s the basic requirement that the F-35B must meet to go to IOC. There must be 10 to 16 planes ready and there must be enough Marines “trained, manned, and equipped to conduct CAS [Close Air Support], Offensive and Defensive Counter Air, Air Interdiction, Assault Support Escort, and Armed Reconnaissance in concert with Marine Air Ground Task Force resources and capabilities.”