An image released by the Pentagon purports to show an Iranian boat near damaged oil tankers.

WASHINGTON The vice chairman of the Joint Chiefs of Staff today offered critical new details of the attack on two commercial ships in the Gulf of Oman, suggesting the US has evidence mines were attached by “a military-trained and capable force.” to the ships while they were underway.

“I will tell you as a military person,” Gen. Paul Selva told reporters at a breakfast meeting, “getting alongside a vessel under the cover of darkness to attach a mine underway is not an insignificant effort. But it wasn’t done by an untrained, unsophisticated group of people. It was done by a military-trained and capable force.”

The general’s comments about how the US assesses the mines were placed on the ship — at night and while they were at sea — add new details to the story, and raise questions over whether the US has more evidence of Iranian culpability. His description also represents the most substantive remarks on the topic by any US official after the explosions which crippled the oil tankers last week.

On Monday, the Pentagon released photographs of the damaged oil tankers showing a hole in the hull of the Japanese tanker Kokuka Courageous, along with what the US says are Iranian naval personnel pulling an unexploded limpet mine from the side of the ship.

“The fact that they were able to quickly and safely remove the mine from the side of the ship would indicate that it was of their own design, their own placement,” Selva said, pointing out that since the mine is now gone, it can’t be used as evidence.

Selva spoke the day after a new deployment of another 1,000 US troops to the region in addition to the 1,500 sent last month. The USS Abraham Lincoln carrier strike group, B-52 bombers and a squadron of F-15 fighter planes were earlier sent to the region. 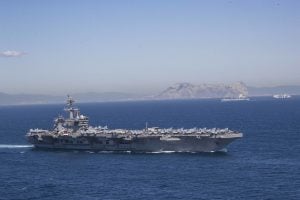 The new troops are bolstered by new “surveillance and reconnaissance” assets as well as units “that can respond if required to an attack against our forces.”

The American forces in the region are ready to strike back quickly if attacked, Selva warned, though he pointed out the tankers were owned by Japanese and Norweigan companies. Of course, Japan is a treaty ally of the United States and Norway is a founding member of NATO. The attacks so far show that Iran is lashing out at the international community, as opposed to the United States.

On Sunday however, the Pentagon confirmed that Iran and Iranian-backed Houthi rebels fired surface-to-air missiles at two US Reaper drones twice over the past week, knocking one out of the sky over Yemen on June 6.

But the attacks on international shipping are unlike the so-called “tanker war” of the 1980s where the US reflagged vessels in order to protect them from Iraqi and Iranian attacks.

This time, Selva said, the US isn’t reliant on Middle Eastern oil in the same way it was in the 80s. Instead, the vast majority of that oil is headed to China and several other Asian countries, none of which “have shown any predilection to pressing Iran to stop what they are doing.”

His comments suggested that the US is looking for countries like Japan, China, South Korea, and Singapore to take a more active role in securing the shipping lanes in the Middle East, and not leave it to the US Navy to provide security.

“I’m not suggesting for a moment that we don’t have a significant role to play in that space,” he said. “But it will require an international consensus before force is used with one specific caveat: if the Iranians come after US citizens, US assets or US military, we reserve the right to respond with a military action. They need to know that. It needs to be very clear.”

The call for an international response was echoed by Secretary of State Mike Pompeo today after his visit to Centcom headquarters in Tampa.

“You have China, South Korea, and Japan, all of whom have enormous interest” in keeping shipping lanes open in the Persian Gulf,” he said. “The United States will do its part” but allies also need to be involved.