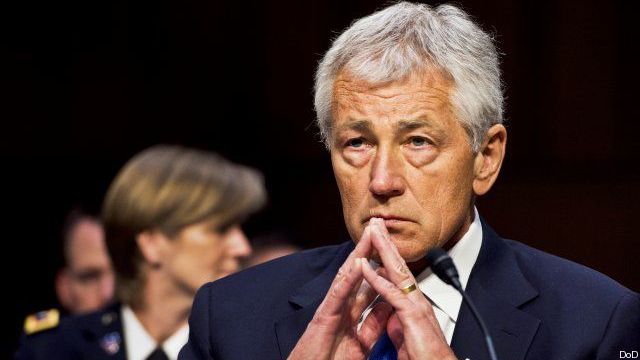 In a town full of hot air, speeches are a dime a dozen. But money still talks. So let’s compare the new Secretary of Defense’s policy agenda to his first proposed budget.

While Leon Panetta, his predecessor, mostly built this budget, Defense Secretary Chuck Hagel owns it now and has already spent a considerable amount of time defending it. The results leave interested observers wanting more. Much more. After listening to Hagel’s first policy speech and comparing it to the President’s 2014 defense budget, it begs the question “Where’s the beef?”

On its face, the new Secretary of Defense seemed to lay out an ambitious reform agenda for tackling the entrenched bureaucratic interests of the Department of Defense (DoD) and politically sensitive issues in need of modernization. The Secretary talked about areas in need of change — some more than others — including acquisition and the purchase of goods and services; bureaucratic overhead and the size of the civilian workforce; excess infrastructure; and compensation for personnel.

Specifically, he began: “In many respects, the biggest long-term fiscal challenge facing the Department is not the flat or declining topline budget, it is the growing imbalance in where that money is being spent internally. Left unchecked, spiraling costs to sustain existing structures and institutions, provide benefits to personnel, and develop replacements for aging weapons platforms will eventually crowd out spending on procurement, operations and readiness.”

However, after discussing at length why these must be areas of targeted modification, Hagel then seemed to throw up his proverbial arms. While he hopes to examine these tough areas, it just might turn out that dramatic changes prove “unwise, untenable or politically impossible.” If that’s the weak starting position of the new boss, reform ideas will surely go nowhere fast. Any apathy by senior leadership toward the commitment to fight for these changes and oversee their implementation will be immediately sniffed out on Capitol Hill and considered dead on arrival.

Where exactly does the Obama budget come down on the four areas almost every Pentagon observer thinks are in need of reform?

Mr. Hagel told Washington: “We need to continually move forward with designing an acquisition system that responds more efficiently, effectively and quickly to the needs of troops and commanders in the field. One that rewards cost-effectiveness and efficiency, so that our programs do not continue to take longer, cost more, and deliver less than initially planned and promised.”

But his budget heads in a different direction. Despite the tough talk regarding restructuring in order to support other key priorities, the Pentagon’s latest budget returns to the favored pot of money to achieve the bulk of savings required by budget cuts: modernization and investments. Out of over $34 billion in savings in the budget, over 44 percent ($15.3 billion) comes from equipment and weapons systems. Of this, most of the cuts are found through program delays and reductions — not any kind of comprehensive shift in how DoD buys these systems. As a result of the over-emphasis on hardware for cuts, the rest of the reforms simply fall far short

The Secretary said at NDU: “[F]iscal realities demand another hard look at personnel — how many people we have both military and civilian, how many we need, what these people do, and how we compensate them.”

While the 2014 budget appears to begin to attempt to corral the size of its nearly 800,000 civilians, the proposal can’t be taken seriously. The budget modestly proposes civilian personnel reductions of roughly 12,000 people, or less than 2 percent. Even with that, there is little reason to expect this request to become a reality if the past is prologue. In the President’s budget just last year, a 1 percent reduction in civilian workforce levels was proposed. The result was quite the opposite. The number of civilians actually grew by almost 2 percent.

Even if this year were somehow different and successful, the reductions to the civilian workforce in FY 2014 would not even reduce this workforce to 2012 levels. On the other hand, the active duty ground forces are falling by more than 7 percent over five years.

Another bold pronouncement by the Secretary: “More broadly, despite good efforts and intentions, it is still not clear that every option has been exercised or considered to pare back the world’s largest back-office. Prior efficiency campaigns yielded substantial savings from the services, and some from the DoD elements known as the “Fourth Estate,” which consists, as you all know, of the Office of the Secretary of Defense, the Joint Staff, the Combatant Commands and the defense agencies and field activities — the Missile Defense Agency, as well as those that provide health care, intelligence, and contracting support.

Yet in many cases, the latest defense budget contributes to — and exacerbates — this growing “Fourth Estate.” While the overall topline is flat, many of the defense field agencies and related organizations are slated to receive generous funding increases next year. The Defense Acquisition University would grow by nearly 22 percent; the Defense Contract Management Agency would receive a 7 percent increase; the Defense Human Resources Activity and the Defense Logistics Agency would see funding increases of nearly 17 percent and 2 percent respectively. Additionally, the Washington Headquarters Service would grow 29 percent while the Defense Security Cooperation Agency and the Office of Economic Adjustment would see increases approaching 37 percent and 47 percent, respectively.

Meanwhile, the same budget that increases support agencies is considerably less generous to the forces they are by definition designed to aid. For instance, while Navy spending stayed about flat between the fiscal 2013 and 2014 budget requests, Army funding was reduced by about 3 percent and Air Force funding increased by about 3 percent. The disproportionate growth in bureaucratic, support and component agencies of several orders of magnitude over what the services receive means the rightsizing of this workforce is not off to any meaningful start.

Secretary Hagel was virtually silent on base closures, except to say: “Left unchecked, spiraling costs to sustain existing structures and institutions, provide benefits to personnel, and develop replacements for aging weapons platforms will eventually crowd out spending on procurement, operations and readiness — the budget categories that enable the military to be and stay prepared.”

But the need to reduce excess facilities and bases while the active duty force shrinks is clear. Unfortunately, Hagel’s near silence on the subject and his tepid public defense of the proposal on Capitol Hill this month speak for themselves. This lack of enthusiasm signals a low personal commitment by him to getting the process approved and underway in earnest this year. While the budget request is an improvement from last year’s, insofar as it is actually asking for implementation money of $2.4 billion, the secretary himself comes across as noncommittal on the need for more closures. If so, Congress will be all too happy to meet him halfway and nix the proposal another year in a row.

Ambitious Agenda Off to a Slow Start

Despite Secretary Hagel’s insistence that Pentagon leaders identify innovative solutions, his first budget request treads water — at best. Worse, the lack of holistic reforms signals that they really might be too difficult to undertake. Many military watchers could interpret this as more evidence that fundamental institutional reform is too risky or undesirable for the Pentagon to carry out. This, of course, only increases the odds things stay the same and the defense budget continues to get squeezed from within, while readiness and modernization keep getting cut. It’s not hard to see how true reform could benefit the Pentagon. With budgets coming and staying down, only structural solutions promise savings of the magnitude necessary to meet challenges such as sequestration. Unfortunately, so far, Washington is signaling that it is still unready for these types of dramatic changes.

Mackenzie Eaglen, a member of the Breaking Defense Board of Contributors, is a defense analyst at the American Enterprise Institute