Halfway To Transparency On Drone Strikes 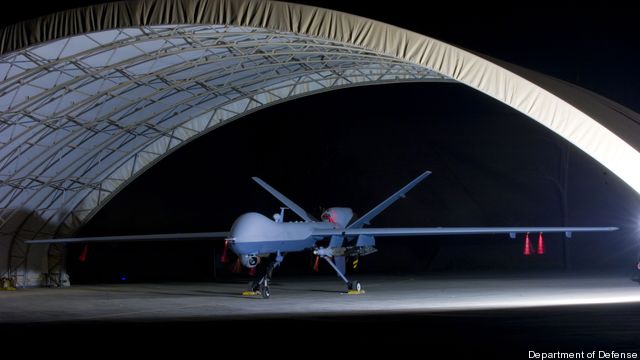 As Pentagon enthusiasm grows for robotic weapons, and drones proliferate to militaries and terrorists around the world, it’s worth remembering some basic questions of ethics, law, and strategy remain unsettled. For insight, we turn to Rachel Stohl, the director of the Conventional Defense program at the Stimson Center and the primary author of the recently released report Grading Progress on U.S. Drone Policy. — The Editors

More than three years after promising greater transparency over the U.S. lethal drone program, the Obama administration took a significant if belated step towards that goal. Late on a Friday afternoon before the long Fourth of July weekend, the administration released the first official government data on the number of civilians killed by U.S. drone strikes, along with an executive order that requires annual disclosures of the numbers of civilians killed in airstrikes conducted against terrorists outside of designated war zones. The release of these two documents represents an important move by the Obama administration to increase accountability over the U.S. drone program and adhere to its stated commitments of greater transparency. Even so, not enough light has been shed on the controversial, secretive drone program.

The Obama administration says that since taking office in January 2009, 473 strikes against terrorist targets have been taken “outside areas of active hostilities” in Afghanistan, Iraq and Syria. That means the estimate includes strikes in Yemen, Pakistan, and Africa. The administration estimates that 64 to 116 non-combatants have been killed since January 20, 2009 in comparison to 2,372 to 2,581 combatant deaths. .

But serious questions remain. The administration did not explain their methodology, which strikes they have counted, or how they count and identify non-combatants.

These figures are also vastly lower than those compiled by credible non-governmental sources. Indeed, non-governmental estimates of civilian casualties from U.S. drone strikes range from just over 200 deaths to more than 1,000 since the program’s inception. Estimates from the Long War Journal and New America, both Washington, D.C.-based research organizations, indicate that at least 200 civilians have been killed in drone strikes in Pakistan, Somalia, and Yemen alone. By comparison, the Bureau of Investigative Journalism estimates that between 325 and 745 civilians have been killed in the time frame provided in the DNI release.

In short, the discrepancies in civilian deaths underline the unspoken message from the Obama administration on drones: trust us because we have better information and are doing the right thing. Imagine if Vladimir Putin or Bashar Al-Assad made the same argument: It wouldn’t be tolerated. Surely the world’s leading democracy should hold itself to a higher standard?

There are also numerous questions of policy and practice that remain unanswered about the legal basis, efficacy, and strategy behind the drone program. With the limited time President Obama has remaining in office, achievable steps can be taken to add clarity to the program and put the next administration on a firmer strategic footing. As soon as possible, the administration should release, in full, the Presidential Policy Guidance to provide the context and the basic framework for U.S. lethal drone strikes. This release should be accompanied by the domestic and international legal framework for the U.S. drone program, including the release of legal memos.

As part of the annual disclosure on civilian casualties, the administration should provide the numbers of strikes by geographical location, the number of casualties in those locations, and who conducted the strikes. The administration should also provide these figures retroactively. Over time, this data can contribute to a comprehensive cost-benefit analysis of the drone program.

Without providing detailed information on the methods and metrics through which the administration reaches these conclusions, we are stuck with an overall lack of information that inhibits objective evaluation of the effectiveness of U.S. drone strikes and the extent to which the program supports larger strategic objectives. Without contextual data — such as geographic location or a year-by-year breakdown of the statistics — and absent a clear methodology for counting casualties, the figures cannot be fully understood.

Transparency and accountability are bedrock principles of American democracy — and President Obama has called his the most “transparent administration in history.” The administration does have a lot it can be proud of on transparency, but creating an environment of extreme secrecy with limited oversight and accountability on the drone program sets a dangerous precedent. The recent disclosures on drones are a clear positive step in the right direction. With his time left in office, President Obama can take even more meaningful action to ensure that the drone program adheres to U.S. values and fosters constructive international norms. That is a legacy on drones more significant than any single strike.