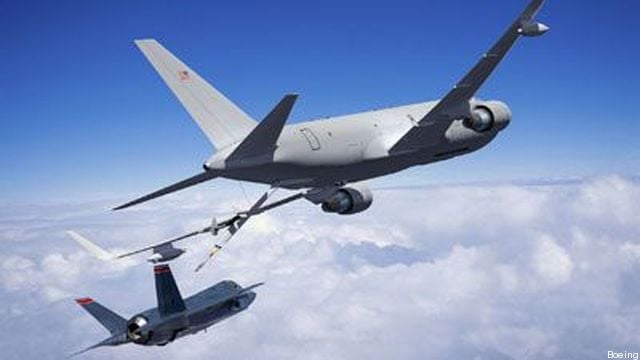 PENTAGON: It’s one of those sentences that gets a defense reporter’s heart beating a little faster.

“DOT&E analysis of initial Boeing schedules with regard to aerial refueling certifications, aircraft and support equipment technical orders, and operator/maintainer training indicates that operational testing will likely slip at least 6 to 12 months.” So says the Pentagon’s director of Operational Test and Evaluation. As often happens with OT&E reports the language matters and is slippery. Their analysis “indicates” that operational testing “will likely” be delayed.

OK. Now the heart is beating a little slower. So we checked with Boeing to see if the program faces a delay. Here’s what spokesman Jerry Drelling said in an email:

“We remain confident in our plan to support Initial Operational Test & Evaluation for the KC-46A tanker and we continue to meet our contractual requirements,” Drelling wrote. “Our current assessment confirms that we have a valid flight test plan in place and that we remain on plan to deliver the first 18 combat-ready Tankers to the U.S. Air Force by 2017.”

I called Drelling and asked if the program faces a delay. He said no and referred me to the Air Force for more information.

Here’s what the Air Force said. They referred me to a recent statement by Maj. Gen. John Thompson, program executive officer for tankers at Wright-Patterson Air Force Base. Thompson said he is 90 percent certain Boeing will meet its contractual obligations for 2014. Those include . It’s possible for a program and OT&E to analyze the same data and come to different conclusions. Sometimes the testers turn out to be right. Sometimes the program is. Bear in mind that the Air Force Chief of Staff, Gen. Mark Welsh, and other senior leaders have said the tanker is one of their top priorities and its budget must be protected.

A congressional aide wrote in an email that he was willing to give Boeing and the program office the benefit of the doubt.

“Based on historical program execution (but albeit for new development aircraft, with P-8 being the exception) DOTE believes there is going to be more regression/refly required test points than what AF and Boeing assume. I think historically it’s at a 35% rate, and Boeing and the AF assumed only an 18-20% rate. Given that’s it’s a commercial aircraft derivative….like the P-8, but without all the Gucci sensors….I’m apt to give the program office the benefit of the doubt at this point,” the aide wrote. “And from what minimal issues came out of the CDR review, as well as the FAA wickets being worked quite expeditiously for the STC, etc., I think their test plan is executable.”

After a few hours the Air Force produced an official statement that mirrors much of what the Hill aide says. Here is most of it:

“The KC-46 development test program is aggressive but achievable. The full time period reserved for Initial Operational Test and Evaluation (IOT&E) remains intact,” the service email says. “Schedule risk mitigations, such as MOAs with outside agencies and leveraging Boeing commercial test resources, are in place. Integrated test plans will optimize the flight test program in such a manner that each flight will maximize the use of the data collected to address Boeing, the FAA, Development Test, and where it makes sense, the Operational Test requirements. This “Test Once” concept allows the possibility of multiple agencies’ unique requirements being accomplished with each event. In addition, the team is working closely with Boeing to ensure flight test plan development addresses receiver certification needs. The KC-46 Program Office 2013 Schedule Risk Assessment indicated that Boeing has a greater than 90% probability of meeting their contractual Required Assets Available (18 aircraft and associated support delivered) date of August 2017.”

In the meantime, if you know what’s happening inside the program, let us know if Boeing starts to go off the rails.