Hooah For Hybrids: 9 Ways the Military Is Curbing Energy Use 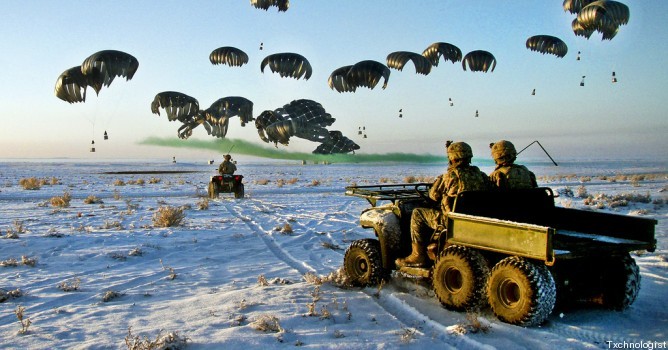 The mission: defeat the enemy while preserving Uncle Sam’s pocketbook. Saving the Earth is a worthy, but secondary, objective.

The Department of Defense last week rolled out its plan to consume less, and find new ways to source, energy. The need has become particularly pressing as operations in Afghanistan and Iraq last year led U.S. forces to consume 5 billion gallons of fuel. The military’s insatiable thirst for energy puts troops in danger as they transport fuel through hostile territory – the Marines estimate one service member is killed for every 24 convoys. It also exposes the Pentagon budget to price shocks in volatile energy markets.

Here are nine ways that the military is trying to cut down its energy use:

1. Portable solar panels to power batteries. A serviceman on a three-day foot patrol in Afghanistan will carry 33 batteries. By 2012, that number could increase to 50 batteries. To combat this growing need to juice up gear, the Army has begun equipping soldiers with portable 62-watt solar panels that can charge batteries in five to six hours. Charging equipment remotely means troops don’t have to go back to vehicles or bases to plug-in or replace batteries.

2. Net zero energy bases. Forward-thinking urban architects have long championed the idea of constructing buildings that generate as much energy from renewable sources as they use. Now the military wants in. While net zero is difficult to achieve, it’s an aspirational goal that drives gains in energy efficiency and conservation and on-site generation. Several bases, including Fort Carson, Colo., are currently attempting to go net zero.

3. Unmanned drones to deliver cargo. Not only would it be safer to drop off cargo with a drone, it would also reduce aircraft weight by removing non-essential items (like on-board pilots) and save fuel. The Air Force asked suppliers in 2009 to build a vehicle that can deliver 500-3000 pounds of cargo within a radius of 500 nautical miles and have a speed of 250 knots and vertical take-off and landing capability. Other service branches have already moved forward with a variety of unmanned cargo vehicles.

4. Jets powered by plant seeds and waste grease. The Air Force uses more than 2 billion gallons of aviation fuel a year – more than some small countries – and consumes the most energy of any service. It has begun experimenting with blends of military aviation fuel and biofuels made of camelina, a plant seed oil, beef fallow and waste oils and greases. Cost is still a major obstacle; the biofuel costs 10 times standard fuel.

5. “The Great Green Fleet.” The Navy has a series of green initiatives – including getting half of its energy from alternative sources by 2020 – but the catchiest is the “Great Green Fleet,” a carrier strike group with nuclear and hybrid electric ships and biofueled jets that is slated to be operational by 2016. Smaller green vehicles will include a new class of Navy river boat, a 49-foot-long riverboat that zooms at 40 knots and is powered by a blend of algae fuel and diesel. It’s a long way from JFK’s PT 109.

6. Hybrid propulsion systems. The USS Makin Island, an amphibious assault ship, has a hybrid gas turbine/electric propulsion system that could save $250 million in fuel over the ship’s lifetime. The diesel electric motors power the ship at low speeds and the 70,000 horsepower gas turbines propel the ship through the high seas (most amphibious ships use steam power). Not quite the “Prius” of the seas, but efficient.

7. Shorter aircraft routes. One way to cut down on fuel use by aircraft is to work with allies to fly more fuel-efficient routes. The U.S. recently formalized a deal with Kazakhstan to allow U.S. supply and troop planes to pass through the former Soviet republic’s airspace directly into Afghanistan. Planes leaving the U.S. can fly directly over the North Pole into Northern Afghanistan.

8. Solar outposts. Supplying fuel to forward bases is expensive and dangerous, so there’s an imperative to create on-site power generation and solar is the most obvious choice. The military is only at the early stages of this project. A company of Marines in Helmand Province, Afghanistan is looking into generating solar power and U.S. forces have helped build Afghan National Army outposts powered by solar energy.

9. Locally grown alternative fuels. Transporting a gallon of gas to combat vehicles in Afghanistan costs about $400, according to a 2009 Pentagon estimate. If the military could source biofuels from local crops, an option troops have explored, it would likely be less expensive and have the additional benefit of promoting the local economy.

This post originally appeared on GE’s The Txchnologist and was featured by Breaking Energy. An enlarged version of all pictures can be viewed by clicking directly on the smaller thumbnail.