WASHINGTON: A long-time State Department official who oversees critical security assistance programs is heading to the Pentagon, a move that may usher in another big change in the reworking of the acquisition and arms exports programs at the Defense Department.

The unexpected announcement was made by Ellen Lord, undersecretary of defense for acquisition and sustainment, who told the ComDef conference her today that Tina Kaidanow has been named director of International Cooperation at the DoD.

Kaidanow, who has served as acting assistant secretary of State for political-military affairs since 2016, will take over the heretofore little-known office from Keith Webster, and will bring her record of strong advocacy for simplifying and increasing FMS with her. 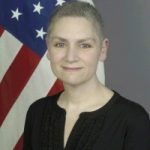 Bringing in such a heavy-hitter — Kaidanow has been one of the most public advocates for the White House’s new arms export policy — to lead an office that has traditionally kept a low profile suggests that the Mattis Pentagon is serious about selling even more military gear to allies, while also needling those same allies to take more responsibility for their own security.

President Trump has long railed against American allies in Europe and Asia who spend relatively little — according to American standards — on their own defense, while American troops are based on their soil, ships ply their coastlines and our aircraft patrol the skies.

The president’s appointees have translated those complaints into action, with Defense Secretary James Mattis regularly traveling the globe to drive the message home. In April, the White House released a new arms sales policy, cutting red tape and affirming that American diplomats should do everything they can to encourage foreign governments to buy American. (Of course, the Trump changes are skin deep in that they do not rely on changes to law or regulation. So far, using the bully pulpit appears to be the principal tool relied on by this administration.)

Speaking at the Center for Strategic and International Studies in August, Kaidanow added that “the new policy reflects the priorities of the president’s National Security Strategy…which are, namely, to preserve peace through strength by reforming regulations to facilitate the exports of U.S. military equipment; to strengthen partners and allies; to facilitate U.S. economic security and innovation.”

The United States has already blown past the amount of weaponry it sold to foreign governments all last year — with a month to go before the fiscal year ends.

American defense companies, with the blessing of the Pentagon and State Department, have already sold $46.9 billion worth of weapons to foreign governments this year, leaving the $41 billion worth of deals in 2017 in the dust.